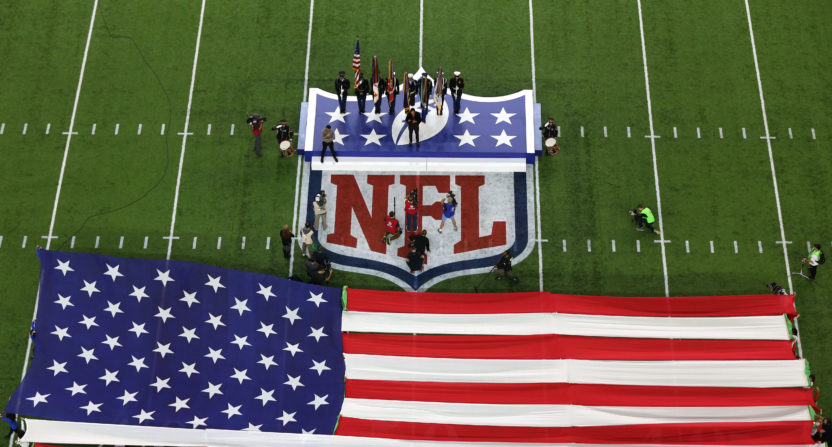 The last we heard, the NFL was considering multiple potential changes to their national anthem policy in an effort to prevent players from protesting with that platform. Now, a new report says one of those options (letting teams decide for themselves) might be the favorite, though there’s an added twist: 15-yard penalties for violators.

Via The MMQB’s Albert Breer:

Sigh. So, it does address one of the concerns from the initial reports that had every team handling policies themselves:

Ownership is clearly not united on this issue, and there really might be a time in the near future when some teams force players to stand for the anthem while others don’t.

Think of the odd logistics there. Say a team is visiting the Texans, where owner Bob McNair has been very vocal about requiring players to stand. If the visiting team is a team that has no such requirement, how will McNair handle it when there are still protests happening on the field in Houston?

Someone else apparently thought about that too, hence the home-team dictation. But it’s still odd; players from organizations that are more supportive being forced to stand when they visit other stadiums is not only an icky thing (especially if there’s a north-south divide among organizational rules), but it’s also bad from an optics standpoint. And the league is very much concerned about optics, which is why the 15-yard penalty is in play.

Think about it. Just fining violators isn’t going to accomplish anything; the players can generally afford to cover that, and would probably make up for the hits in other ways by taking that sort of stand. And it’s not really hurting fans, especially neutral fans who might not really care one way or the other about what a player does during the anthem. (Which has to be a much larger group than any group threatening to boycott over a protest.)

But to risk a penalty and on-field consequences? That’s a narrative the league clearly wants in play, because it then becomes “You’re hurting the team!” If it comes into effect (and who knows whether or not anything like this can be instituted without an update to the CBA, or at least major pushback from players), that’s going to be the talking point for anyone who thinks players should be standing; owners, coaches, executives, fans, talking heads, even some select players.

That’s regardless of the inherent silliness to the proposal, pointed out right away on Twitter:

By the time we're done we'll have a 5-yard kneeling, a 15-yard kneeling, and 30 minutes of replay before opening kickoff so the refs can determine if there was any flagrant kneeling that would result in a suspension https://t.co/wiIATeT4KT

What if there's offsetting penalties? Do we do the anthem over?

There are about a million things to try before this (including just having teams in the locker room for the anthem, as was the rule for a very long time), but the NFL loves nothing more than adding new penalties to the rule book, so here we are.