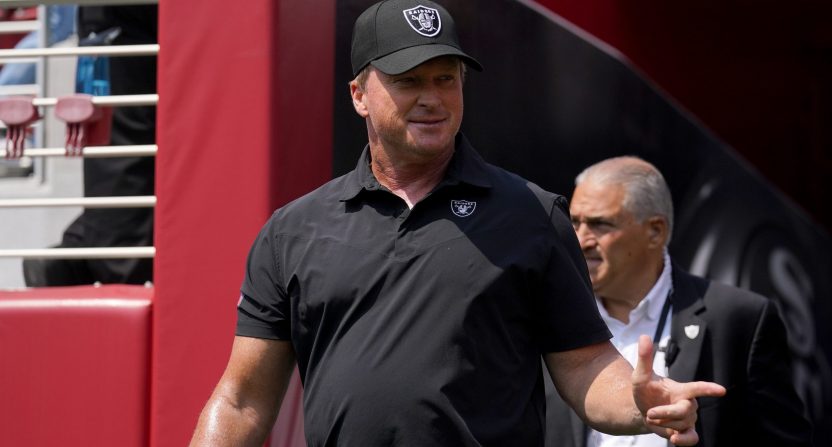 The Jon Gruden Email saga, which is itself part of the larger Washington Football Team Workplace Harassment saga, isn’t going away anytime soon, in spite of what the NFL might want to do.

The league has filed a motion to dismiss former the former Las Vegas Raiders head coach’s lawsuit and move it to arbitration following his attempt to fight back after the scandal forced him to resign in October. As part of their motion, the NFL told a Nevada court that the former coach also sent further offensive emails to at least six other people beyond what was made public.

Per The Athletic, the filing also seems to make it clear that had Gruden not resigned, NFL commissioner Roger Goodell would have unilaterally fired him.

“Gruden sent a variety of similarly abhorrent emails to a half dozen recipients over a seven-year period, in which he denounced `the emergence of women as referees,’ and frequently used homophobic and sexist slurs to refer to Commissioner Goodell, then-Vice President Joseph Biden, a gay professional football player drafted in 2014, and others,” the NFL wrote.

These allegations are on top of the emails that are known, which include Gruden’s use of a racist trope to describe NFLPA executive director DeMaurice Smith, and the use of homophobic language to describe Goodell and others.

“The crux of Gruden’s Complaint is that somehow the NFL or the Commissioner `leaked’ his non-confidential emails (which were already sitting in the hands of Gruden’s many recipients and as to which Gruden had no colorable expectation of privacy) to, for some inexplicable reason, destroy his career and ruin his reputation, despite the fact that the emails precipitated numerous media stories critical of the League, and also negatively impacted the League and the Raiders in the middle of the football season,” the NFL wrote, and “would have and could have permitted the Commissioner himself to sanction and fire Gruden.”

“Indeed, it would be hard to imagine conduct more detrimental to football than the use by a football coach of a racist trope to describe the leader of NFL Players Association.”

Some have alleged that WFT owner Dan Snyder leaked the emails in an attempt to make former WFT GM Bruce Allen and Gruden look bad and take the heat off of himself.

The lawsuit will now move to hearings where this and other motions will be considered to see how the case moves forward. If the lawsuit is dismissed, that might leave Gruden with few legal options. But however it turns out, it’s hard to imagine that the former broadcaster and coach will ever be associated with the NFL again in any capacity.