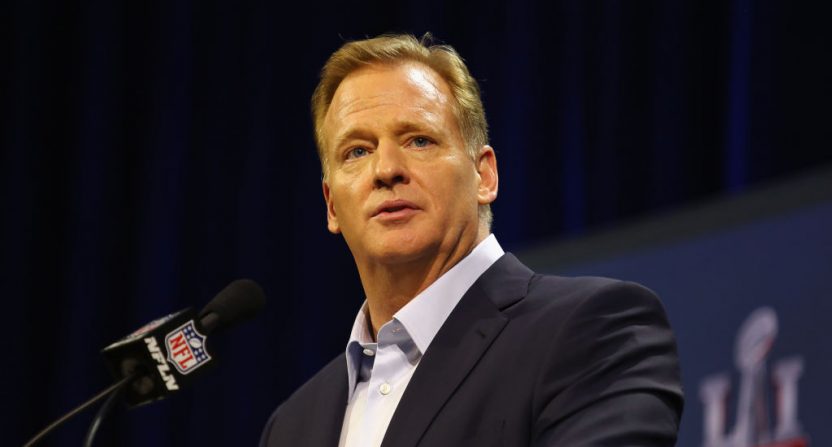 The National Football League makes plenty of money thanks to massive sponsorship deals, a huge fan base, and, of course, eye-popping TV contracts. Thanks to all of those money making avenues, the NFL’s revenue for this past season reached an incredible all-time high of around $14 billion. Yes billion, with a B.

That total of $14 billion represents an increase of $900 million compared to last year, according to the Sports Business Journal.

“It continues unabated,” Marc Ganis, a sports consultant close to the NFL, told SBJ. “When you get above a certain number, it is really hard to move the needle on revenue growth.”

NFL revenue rose about 7% for this past season to roughly $14 billion, according to @dkaplanSBJ

While the numbers aren’t 100% official yet, the $14 billion is based on calculations from the league based on the salary cap, media deals, new revenue from the Minnesota Vikings’ new stadium, and other revenue streams.

The salary cap portion, however, is the most complicated measure, as detailed by SBJ.

“The figures are based on calculations from the salary cap for the 2017 season, which the league and NFLPA released last week. The cap is $167 million a team. With player benefits pegged at $37 million, the total for each of the 32 clubs comes to $204 million, or $6.5 billion in labor costs for 2017.

The league shares most revenue with the players, who get between 46 percent and 48 percent of each year’s take. That would translate to revenue of between $13.6 billion and $14.2 billion.”

But once again, the numbers aren’t 100% complete and calculated, so it’s possible the NFL’s final revenue total for the 2016-2017 season could surpass $14 billion by a small or large margin.

Outside of the salary cap, sponsorship and TV deals also play a big part in revenue. The Thursday night TV deal signed by the NFL with multiple networks took a big jump this past season. Thanks to the new two-year deal with CBS and NBC last year, the Thursday Night package increased from $300 million to $450 million per year.

The final big portion of the increase in revenue came from the new stadium in Minnesota, U.S. Bank Stadium. Because of the massive sponsorship deal signed to name the stadium and an increase in ticket sales, the NFL’s revenue does see an increase, albeit a smaller one than the league gets from the TV deals.

While the $14 billion is nice for the NFL, one Twitter user proposed it could be used for reasons other than football.

The NFL will reach $14 billion in revenue in 2017. That's almost enough for everyone in China to have one Arby's lunch.