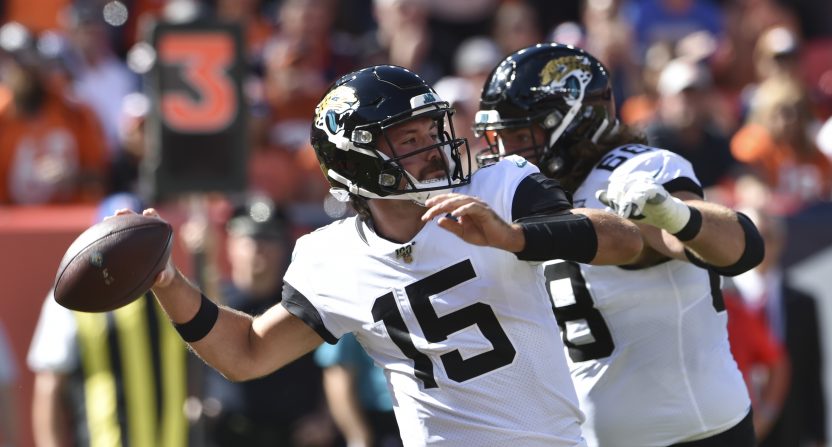 With four weeks in the books, we can begin to draw some conclusions about the NFL’s most highly-touted rookies. Some have delivered, others have disappointed, and many have surprised. Here are the league’s top 10 first-year players entering October.

1. Jacksonville Jaguars QB Gardner Minshew: The 10th quarterback selected in the 2019 NFL draft is the league’s sixth-highest-rated passer at the quarter pole. He’s been accurate, strong-armed, composed and clutch despite no NFL experience and limited support. He’s the story of the year thus far.

2. New York Giants QB Daniel Jones: He’s turned the ball over four times in two starts, but the No. 6 overall pick has also generated five touchdowns. He led an incredible comeback over the Buccaneers in his debut, and his 82.4 QBR ranks third in the league, behind only Dak Prescott and Patrick Mahomes.

3. Oakland Raiders RB Josh Jacobs: The first-round pick out of Alabama has run like a stallion in the Oakland backfield, giving the Raiders a whole new dimension on offense. He’s on pace to go over 1,200 rushing yards and is averaging 5.0 yards per attempt.

4. Carolina Panthers EDGE Brian Burns: Only current defensive player of the year front-runner Shaquil Barrett has more quarterback hits this season than Burns, who has 2.5 sacks and 11 tackles out of the gate in Carolina.

5. Pittsburgh Steelers LB Devin Bush: Only eight players have more tackles than the No. 10 overall pick. He’s also got a sack and three tackles for loss. He looks like the real deal and should be a Pro Bowler right off the bat.

6. Buffalo Bills DT Ed Oliver: We figured there’d be some growing pains for the somewhat raw top-10 pick out of Houston, but Oliver has often been dominant thus far. He’s already got 11 quarterback pressures.

7. Washington Redskins WR Terry McLaurin: The No. 76 overall pick leads all rookies with three touchdowns, and he ranks 10th in the NFL with 85.7 receiving yards per game. “Scary Terry” looks like a complete steal, and he’s on pace for a 1,000-yard rookie campaign despite missing Week 4 due to injury.

8. Tennessee Titans WR A.J. Brown: The second-round pick out of Mississippi is tied with fellow former Rebel rookie D.K. Metcalf for the NFL lead with 22.3 yards per reception. They both have 10 catches for 223 yards, but Brown has two touchdowns to Metcalf’s one. He’s also the only rookie in the league with multiple 90-yard receiving games under his belt.

9. New England Patriots EDGE Chase Winovich: The third-round pick out of Michigan leads all rookies with three sacks, which is remarkable considering he’s been on the field for just 84 snaps thus far. Look for him to emerge as a defensive rookie of the year candidate as he gets more work.

10. Baltimore Ravens WR Marquise Brown: “Hollywood” is at risk of falling off this list based on his current pace, because his numbers have dropped off every week. Still, he was dominant in Week 1 and solid in Week 2, and he looks like he’ll be a playmaker for years to come.