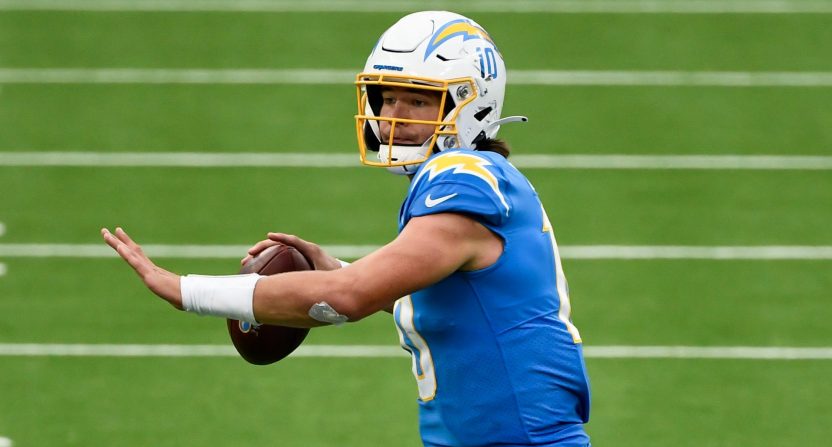 Throughout the NFL season, we’re ranking the top 10 rookies in the league based on their progress. Here’s the breakdown following Week 9.

10. Pittsburgh Steelers WR Chase Claypool: The Notre Dame second-rounder wasn’t at his best against the Dallas Cowboys, but still caught eight passes for 69 yards, and still has more touchdown catches (five) than any other rook.

9. Dallas Cowboys WR CeeDee Lamb: The first-round Oklahoma product was again a big factor for Dallas despite quarterback issues in Week 9. He leads all rookies by a large margin with 44 catches.

8. Kansas City Chiefs RB Clyde Edwards-Helaire: The first-round selection out from LSU just isn’t getting much work now, but he still ranks fifth in the league with 810 scrimmage yards.

7. Washington Football Team edge Chase Young: It hasn’t been a great year for defensive rookies in general, but the second overall pick out of Ohio State leads the way with 3.5 sacks. He brought plenty of heat against the New York Giants in Week 9

6. New England Patriots G Michael Onwenu: The sixth-round pick has been a pleasant surprise for a Patriots team in trouble this season. He’s surrendered just one sack and six pressures in eight starts.

5. Jacksonville Jaguars RB James Robinson: The undrafted Illinois State product is one of just seven players with more than 800 scrimmage yards this season. He beats out Edwards-Helaire because he ranks in the top 10 in the league with seven touchdowns (compared to three for CEH).

4. Cincinnati Bengals WR Tee Higgins: Between the start of October and his Week 9 bye, the second-round Clemson product led the entire AFC with 413 receiving yards.

3. Minnesota Vikings WR Justin Jefferson: The first-round LSU product has been quiet of late, but he still leads all qualified receivers with 14.3 yards per target, and he’s the only first-year player with more than 600 receiving yards.

2. Cincinnati Bengals QB Joe Burrow: In the two weeks before Cincy’s bye, the No. 1 overall pick out of LSU posted five touchdown passes to one interception as his Bengals scored 65 points. He remains on track to become a superstar.

1. Los Angeles Chargers QB Justin Herbert: The No. 6 overall pick out of Oregon is a top-10 quarterback when it comes to touchdowns, yards per attempt, passer rating, and QBR. Critically, he has a triple-digit rating on third down, in the fourth quarter of one-score games and on deep passing attempts. He’s killing it.