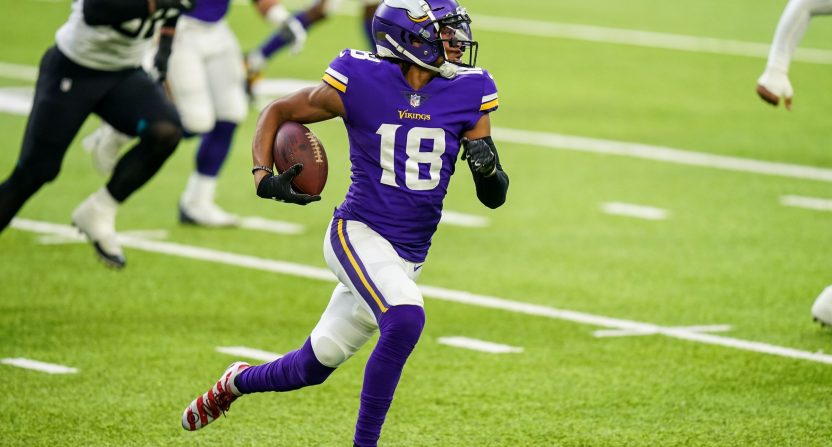 Throughout the NFL season, we’re ranking the top 10 rookies in the league based on their progress. Here’s the breakdown following Week 14:

10. Pittsburgh Steelers WR Chase Claypool: It’s been a quiet few weeks for the Notre Dame product, but only nine NFL players have scored more touchdowns this season than Claypool (10).

9. Indianapolis Colts S Julian Blackmon: The third-rounder out of Utah has two picks, six passes defensed, and a forced fumble in 12 games, but that doesn’t do justice to his impact.

8. Washington Football Team RB Antonio Gibson: The third-rounder out of Memphis suffered a toe injury early in Week 13, but he’s still averaged 5.4 yards per carry with eight touchdowns in his last six games.

7. Cincinnati Bengals QB Joe Burrow: Five interceptions in 10 starts is pretty damn impressive when you consider Burrow’s lack of support in Cincinnati. It’s a shame we won’t see him again until 2021. We’ll keep him on the list until somebody shines enough to move ahead of him.

5. Tampa Bay Buccaneers OT Tristan Wirfs: The No. 13 overall pick out of Iowa has been responsible for just one sack on Tom Brady through 13 games.

4. Washington Football Team edge Chase Young: The No. 2 overall pick out of Ohio State had a sack, forced fumble, fumble recovery, and touchdown in a fourth consecutive win for the WFT. He’s up to 5.5 sacks now and has played a critical role on that winning streak.

3. Jacksonville Jaguars RB James Robinson: The Illinois State product has now set a record for scrimmage yards for an undrafted rookie with 1,361 — a mark that ranks behind only stars Dalvin Cook, Derrick Henry, and Alvin Kamara.

2. Los Angeles Chargers QB Justin Herbert: This is becoming quite the race after the No. 6 overall pick out of Oregon completed more than 80 percent of 44 passes in a Week 14 victory over the Atlanta Falcons.

What a throw by Justin Herbert on this touchdown pass to Keenan Allen. pic.twitter.com/G8rfQMwSBb

1. Minnesota Vikings WR Justin Jefferson: The first-round LSU product cooled off a fair bit in a Week 14 loss, but he’s tied for the league lead with 12.4 yards per target, and only five receivers in football have more yards.