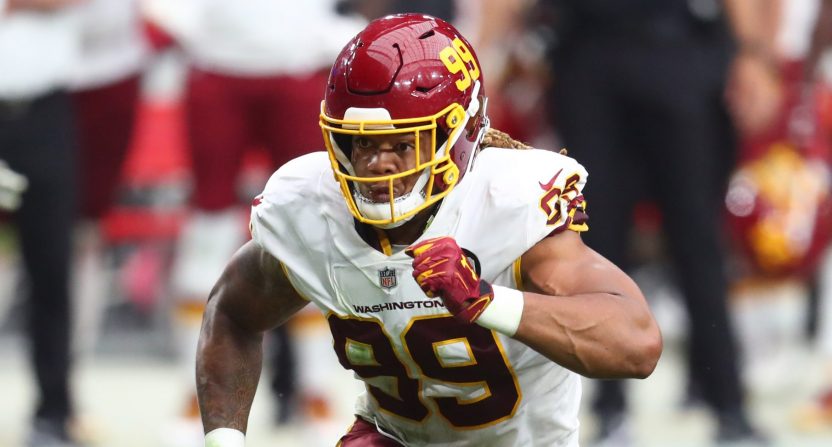 Throughout the NFL season, we’ll be ranking the top 10 rookies in the league based on their progress. Here’s the breakdown following Week 2.

10. Dallas Cowboys WR CeeDee Lamb: Following a 106-yard performance in the Cowboys’ thrilling comeback victory over the Atlanta Falcons, the 21-year-old first-round pick leads all rookies with 165 yards. He’s yet to drop a pass.

9. Los Angeles Chargers RB Joshua Kelley: The fourth-round UCLA product has 173 yards from scrimmage in his first two pro outings, which ranks behind only Lamb, two running backs to be named, and Jonathan Taylor. Taylor and Kelley are neck-and-neck, but I’m giving Kelley a slight edge because he’s done a little bit more work after contact.

8. Tampa Bay Buccaneers S Antoine Winfield Jr.: The second-rounder out of Minnesota has 17 tackles, two quarterback hits, and a sack. He has shined across the board.

7. Jacksonville Jaguars CB CJ Henderson: The highly-touted first-round pick was dominant in his first NFL game, and he has allowed an opposing passer rating of just 71.4 thus far.

6. Chicago Bears CB Jaylon Johnson: The second-round Utah product already has five passes defensed under his belt. Opposing quarterbacks have completed fewer than half of their throws into his coverage.

5. New York Jets OT Mekhi Becton: The highest-graded qualified rookie offensive tackle at Pro Football Focus has surrendered just four pressures in two games, which is phenomenal considering that everything else that could go wrong is indeed going wrong in New York.

4. Cincinnati Bengals QB Joe Burrow: The numbers don’t completely jump out at you yet, but the draft’s top selection is on the right track. He has made some promising throws, and has tossed just one interception. Don’t overlook his 65 rushing yards.

3. Jacksonville Jaguars RB James Robinson: The undrafted sensation leads all rookies with 210 scrimmage yards following a triple-digit effort on the ground against the Tennessee Titans. It looks as though the Jags already have their replacement for Leonard Fournette.

2. Kansas City Chiefs RB Clyde Edwards-Helaire: CEH wasn’t as much of a difference-maker in Week 2, but the first-round LSU product still gained 70 yards from scrimmage and made six catches against the Chargers.

1. Washington Football Team edge Chase Young: The top defensive player in this class already has 2.5 sacks, eight tackles, a forced fumble, and five quarterback pressures. He’s not dominating yet, but there’s little doubt he leads the Defensive Rookie of the Year race.