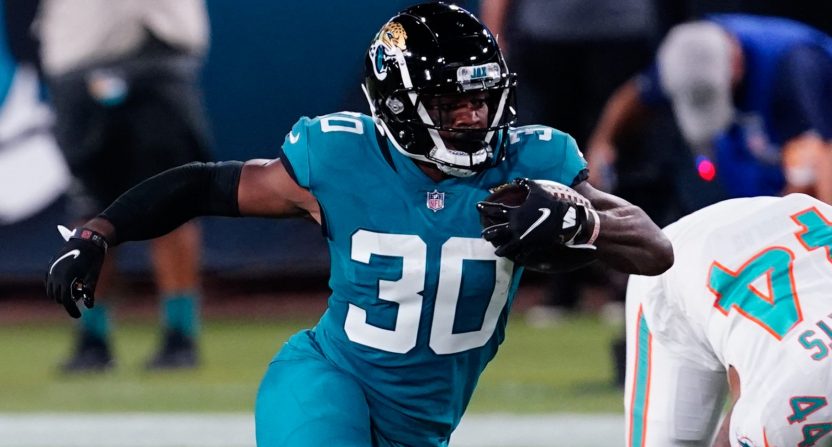 Throughout the NFL season, we’ll be ranking the top 12 rookies in the league based on their progress. Here’s the breakdown following Week 3.

10. Jacksonville Jaguars CB CJ Henderson: There have been some warts, but his kick-ass Week 1 performance keeps the first-round Florida product on this list.

9. Tampa Bay Buccaneers S Antoine Winfield Jr.: He already has two sacks and a forced fumble, and has been solid in coverage. Fantastic start for the Minnesota product.

8. Dallas Cowboys WR CeeDee Lamb: The first-rounder out of Oklahoma has been a consistently productive weapon in the Dallas offense thus far. He leads all rooks with 16 catches.

7. Los Angeles Chargers QB Justin Herbert: The top-10 pick has gone over 300 yards in each of his first two games and is the league’s highest-rated passer on third down.

4. Minnesota Vikings WR Justin Jefferson: After exploding in Week 3, the first-round LSU product leads all rookies with 245 receiving yards. He’s caught 80 percent of the passes thrown his way, and is averaging more than 20 yards per reception.

3. Cincinnati Bengals QB Joe Burrow: The top pick is off to a tremendous start with five touchdown passes to just one interception, along with 64 rushing yards. He’s taken a league-high 14 sacks, but that’s an indictment on his support.

2. Jacksonville Jaguars RB James Robinson: The undrafted Illinois State product has 210 rushing yards, a strong 4.9 yards-per-attempt average, and 10 catches for 129 yards. He ranks eighth in the NFL in yards from scrimmage.

1. Kansas City Chiefs RB Clyde Edwards-Helaire: CEH hasn’t lived up to his Week 1 performance, but has caught 11 passes for 102 yards over the last two weeks. He ranks seventh in scrimmage yards.