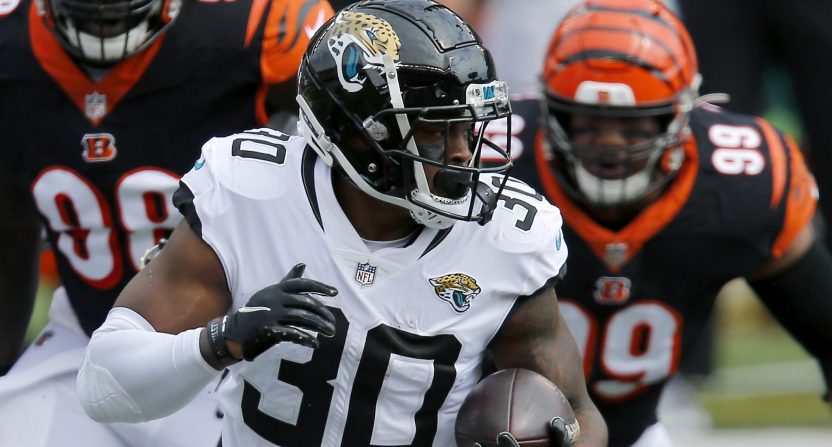 Throughout the NFL season, we’ll be ranking the top 10 rookies in the league based on their progress. Here’s the breakdown following Week 4.

10. Washington Football Team edge Chase Young: Young is hurt now, but the top defensive selection in the 2020 draft was often dominant before going down with a groin injury. He has 2.5 sacks and a forced fumble thus far.

9. Tampa Bay Buccaneers OT Tristan Wirfs: The N0. 13 overall selection has yet to surrender a sack at the right tackle position in Tampa. He’s taken a pair of penalties and is responsible for a few quarterback hits, but he has a clear early edge over fellow highly-touted rookie offensive tackles Jedrick Wills Jr., Mekhi Becton, and Andrew Thomas.

8. Chicago Bears CB Jaylon Johnson: The second-round Utah product has surrendered just 10 completions on 22 throws into his coverage, and he ranks second in the league with seven passes defensed.

7. Tampa Bay Buccaneers S Antoine Winfield Jr.: The second-round Minnesota product has stood out both as a pass-rusher and in coverage while exhibiting top-notch tackling thus far for the revamped Bucs secondary.

6. Dallas Cowboys WR CeeDee Lamb: Coming off a two-touchdown performance, the first-rounder out of Oklahoma is one of just 13 players with more than 300 receiving yards thus far.

5. Cincinnati Bengals QB Joe Burrow: The top pick hasn’t lost since Week 2 and has solid overall numbers. It was encouraging that he took just one sack in a Week 4 win over the Jacksonville Jaguars.

3. Minnesota Vikings WR Justin Jefferson: The first-round pick out of LSU leads the league with a yards-per-target average of 17.4 following a second consecutive 100-yard game.

2. Kansas City Chiefs RB Clyde Edwards-Helaire: 91 more yards on 19 touches for CEH Monday night moves the LSU product into the fourth spot on the scrimmage yardage list, behind only two established veterans and…