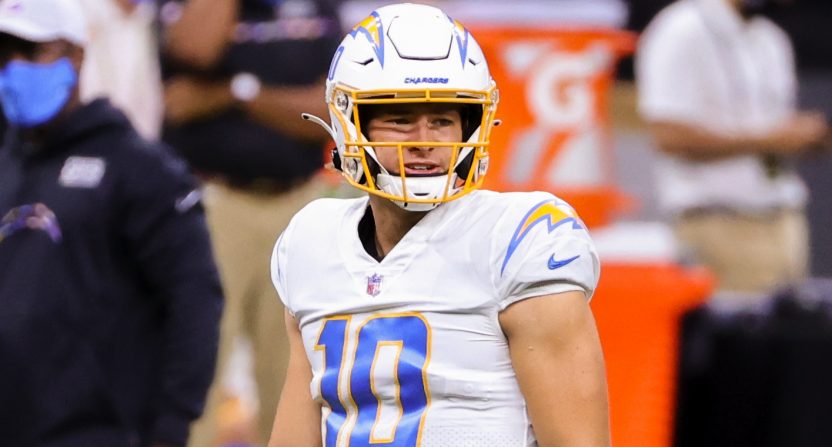 Throughout the NFL season, we’ll be ranking the top 10 rookies in the league based on their progress. Here’s the breakdown following Week 5.

10. Tampa Bay Buccaneers OT Tristan Wirfs: The N0. 13 overall selection has given up just one sack at the right tackle position in Tampa. He’s taken a few penalties and is responsible for a few quarterback hits, but he has a clear early edge over fellow highly-touted rookie offensive tackles Jedrick Wills Jr., Mekhi Becton, and Andrew Thomas.

9. Chicago Bears CB Jaylon Johnson: The second-round Utah product has surrendered just 17 completions on 38 throws into his coverage, and he ranks tied for second in the league with seven passes defensed.

8. Tampa Bay Buccaneers S Antoine Winfield Jr.: It really hasn’t been a special year for rookie defenders, but the second-round Minnesota product has stood out both as a pass-rusher and in coverage while exhibiting top-notch tackling thus far for the revamped Bucs secondary.

7. Cincinnati Bengals QB Joe Burrow: He’s taking too many sacks and it’s not all on the offensive line, but the No. 1 overall pick out of LSU has still flashed as a passer and rusher and has limited his turnovers. He’s on the right track despite a lack of pass protection.

6. Pittsburgh Steelers WR Chase Claypool: The Canadian sensation leads all rookies with five touchdowns, four of which came in an unreal performance against the Philadelphia Eagles in Week 5.

5. New England Patriots G Michael Onwenu: The only offensive lineman in the top five wasn’t drafted until Round 6. While many of the high-profile tackles from the first round are struggling, Onwenu has blown up Pro Football Focus.

4. Dallas Cowboys WR CeeDee Lamb: With another strong performance in a Week 5 victory, the 17th overall pick from Oklahoma now ranks fifth in the NFL in receiving yardage.

3. Kansas City Chiefs RB Clyde Edwards-Helaire: The first-rounder out of LSU ranks sixth in the league in scrimmage yards, but has scored just one touchdown thus far.

1. Los Angeles Chargers QB Justin Herbert: The No. 6 overall pick out of Oregon doesn’t have his first career win yet, but ranks eighth in the NFL with a 107.1 passer rating. He’s the NFL’s highest-rated passer on third down, and only 11 quarterbacks have completed more deep passes despite the fact Herbert missed Week 1 and has received very limited support.