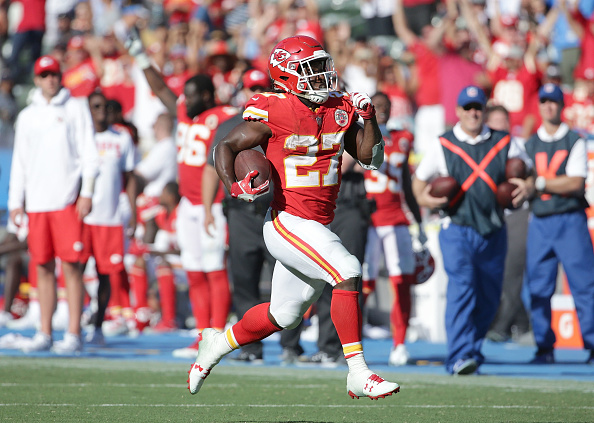 As the second half of the 2017 NFL season gets underway, here’s a fresh look at the top 10 rookies from the first half of the year…

1. Houston Texans QB Deshaun Watson: Let’s give the guy one more week at the top. We’ll always wonder what could have been, because before suffering a torn ACL Watson was putting together the best rookie season I’d ever witnessed.

2. New Orleans Saints CB Marshon Lattimore: The defensive rookie of the year frontrunner continues to be one of the best shutdown corners in the NFL, which is amazing considering he’s a freakin’ rookie and part of what was supposed to be a horrible defense. He’s a huge reason the Saints have won six straight.

3. Kansas City Chiefs RB Kareem Hunt: He’s faded a bit, but the third-round pick out of Toledo still leads the league in scrimmage yards by a 107-yard margin.

4. Saints RB Alvin Kamara: He’s still not being featured fully, but the third-rounder out of Tennessee has become a huge weapon in New Orleans. He has 518 scrimmage yards and four touchdowns in his last five games, all Saints wins.

5. Jacksonville Jaguars RB Leonard Fournette: He’s averaging a league-high 99.3 rushing yards per game, but missing one game due to injury and another due to a team-imposed suspension isn’t good.

6. Buffalo Bills CB Tre’Davious White: The No. 27 overall pick is a top-10 corner at Pro Football Focus. Plus he’s got a pick, a forced fumble, two fumble recoveries, 27 tackles and a defensive touchdown under his belt.

7. Pittsburgh Steelers OLB T.J. Watt: J.J.’s younger bro burst onto the scene with a pair of sacks and an interception in his NFL debut. But he got hurt in Week 2 and hasn’t been quite the same since. Still, the No. 30 overall pick now has four sacks and 27 tackles, and we’re not moving him coming out of a bye week.

8. Steelers WR JuJu Smith-Schuster: The first player in NFL history to score four touchdowns before his 21st birthday, Smith-Schuster has emerged as a hell of a complement to Antonio Brown in Pittsburgh. He’s coming off a 193-yard performance in a victory over the Detroit Lions, and he again stays put because the Steelers had a Week 9 bye.

10. Saints OT Ryan Ramczyk: The final selection of the first round has saved the Saints by stepping in at both tackle spots and performing extremely well. What a rookie class for Mickey Loomis and Sean Payton…