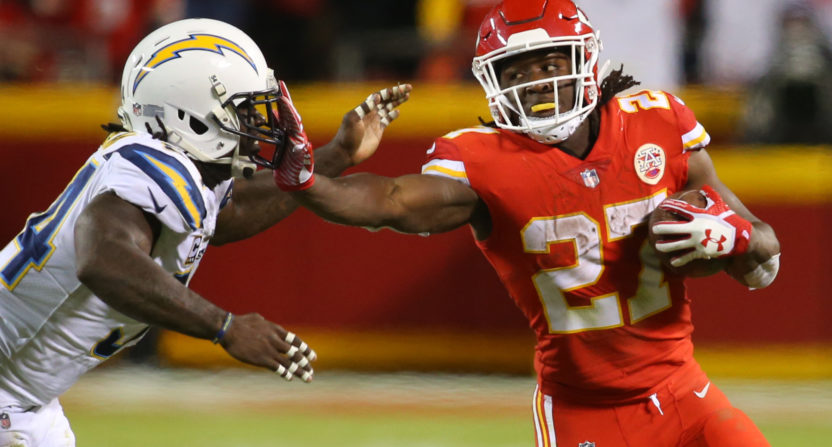 It’s been a weird year in the NFL, rookie class included. A pair of first-year cornerbacks have already become elite, a pair of third-round running backs are in the Pro Bowl and three Saints are ranked among the top five. At least that’s how I see it.

Here is how I rank the 2017 rookie standouts after Week 15’s results.

1. Buffalo Bills CB Tre’Davious White: The first-rounder out of LSU has already become a shutdown corner, and against Miami in Week 15 he recorded his third interception in a four-game span.

2. New Orleans Saints CB Marshon Lattimore: Also a shutdown corner with picks in back-to-back games, Lattimore is likely to be compared to White for years to come. Rare to see defensive backs excel this much as rookies. He’s off to the Pro Bowl.

3. Saints RB Alvin Kamara: 99 yards and another touchdown coming back from a concussion. The third-rounder out of Tennessee earned that improbable Pro Bowl nod.

4. Kansas City Chiefs RB Kareem Hunt: The third-round pick out of Toledo has bounced back from a midseason rut with 344 scrimmage yards and 5.5 yards per rushing attempt the last two weeks. Only he and Le’Veon Bell have more than 1,200 rushing yards, which is why he’s headed to the Pro Bowl.

5. Saints OT Ryan Ramczyk: The first-rounder out of Wisconsin is getting better and better each week. He was a Pro bowl snub.

6. San Francisco 49ers LB Reuben Foster: Every week it’s at least seven tackles for the highly-touted first-rounder out of Alabama. He’s a champ against the run and would be in Pro Bowl conversations had he not missed so much time early in the year.

7. Los Angeles Rams WR Cooper Kupp: The increasingly reliable third-round slot receiver wasn’t asked to do much in a blowout victory over the Seahawks, but he leads all rookie receivers in receptions and yardage.

8. Pittsburgh Steelers WR JuJu Smith-Schuster: After struggling and dealing with some turmoil, the league’s youngest player made a big impact with Antonio Brown out against the Patriots in Week 15, catching six passes for 114 yards.

9. Carolina Panthers RB Christian McCaffrey: The first-rounder out of Stanford leads all rookies with 73 catches. He has eight touchdowns and nearly 1,000 yards from scrimmage, making up for the fact he’s averaging just 3.7 yards per carry.

10. Rams S John Johnson III: Quiet week but he’s still got an edge over top honorable mentions T.J. Watt and Desmond King. The third-rounder out of Boston College has been extremely versatile in the Rams defensive backfield.