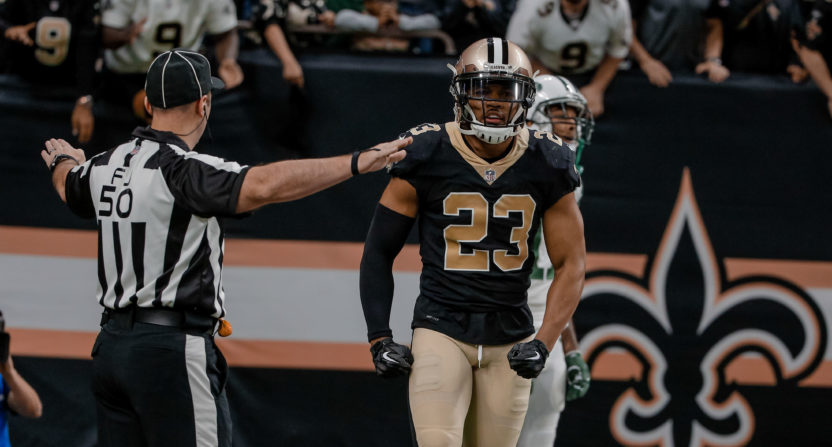 The 2017 NFL regular season is complete, which means the majority of the league’s rookies — those not lucky enough to be participating in the playoffs — are now essentially sophomores.

With that in mind, here’s the final edition of our 2017 rookie rankings.

1. New Orleans Saints CB Marshon Lattimore: The first-round Ohio State immediately became one of the league’s most feared cornerbacks in 2017, intercepting five passes and recording 18 passes defensed in 13 outings. He’s off to the Pro Bowl and should be a major factor in the playoffs.

2. Buffalo Bills CB Tre’Davious White: The first-rounder out of LSU put up similar numbers to Lattimore and was arguably better in coverage while playing three more games. But Lattimore did have an extra interception while also scoring a touchdown in three fewer starts. This really could go either way, but I think Lattimore made a slightly larger impact.

3. Kansas City Chiefs RB Kareem Hunt: The third-round pick out of Toledo rebounded from a midseason slump with a 5.0 yards-per-attempt average and five touchdowns in December, despite receiving just one carry (a 35-yard score) in Week 17. Hunt also managed to win the rushing title with 1,327 yards and is off to the Pro Bowl unless Kansas City makes the Super Bowl.

4. Saints RB Alvin Kamara: The third-rounder out of Tennessee averaged a league-best 6.1 yards per carry, and his cumulative totals (1,554 scrimmage yards and 14 total touchdowns) are insane considering his workload.

5. Saints OT Ryan Ramczyk: The first-rounder out of Wisconsin has already become one of the steadiest offensive linemen in football. He should have made the Pro Bowl.

6. Pittsburgh Steelers WR JuJu Smith-Schuster: The second-round USC product exploded in Week 17, catching nine of the 10 passes thrown his way for 143 yards while adding a touchdown on a kick return. Despite being the youngest player in the league, Smith-Schuster led all rookies with seven touchdown grabs.

7. Los Angeles Rams WR Cooper Kupp: The third-rounder out of Eastern Washington didn’t play in Week 17, but he still led all rookie receivers with 62 catches, scoring five touchdowns along the way.

8. Carolina Panthers RB Christian McCaffrey: It’s probably not a coincidence that the first eight players on this list are headed to the playoffs. McCaffrey had a so-so year on the ground, but the first-round pick out of Stanford caught 80 passes, scored seven total touchdowns and post over 1,000 yards from scrimmage.

9. Cleveland Browns DE Myles Garrett: Expectations were high and injuries held him back, but the No. 1 overall pick out of Texas A&M still managed seven sacks in just 11 games. He’s set to have a huge second season if he can stay healthy.

10. San Francisco 49ers LB Reuben Foster: The sample size is a little small, which is why I thought about giving this to Deshaun Watson for his half-season of work instead. But Foster was an absolute stud in run defense in his 10 games. Watch for the first-round pick out of Alabama to become a Pro Bowler very soon.