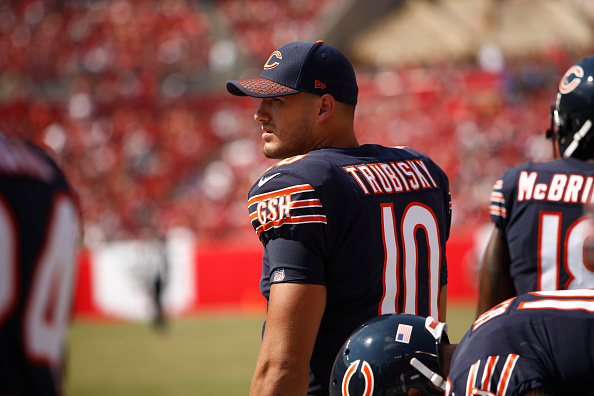 Throughout the 2017 NFL season, we’re monitoring the progress made by the league’s rookie quarterbacks by power ranking them based on their play, their circumstances or both.

Despite the fact that only two rookie signal-callers have thrown passes thus far, here’s how the rookie crop of NFL quarterbacks shakes out entering Week 3.

1. Mitchell Trubisky, Chicago Bears (last week: 4th): That’s right, a dude who hasn’t thrown a pass ranks first among rookie quarterbacks. That’s because the next two guys on the list have done more harm than good as starters, and because the Bears’ stopgap starter, Mike Glennon, has struggled.

DeShaun Watson returns from that vicious sack with a 49 yard rushing TD! pic.twitter.com/rr9fDlYlMx

2. Deshaun Watson, Houston Texans (last week: 2nd): The No. 12 overall pick wasn’t particularly good in his first NFL start, but the Texans did beat the Cincinnati Bengals and Watson made some memories with a splashy 49-yard touchdown run.

3. DeShone Kizer, Cleveland Browns (last week: 1st): The only rookie quarterback to start in Week 1 was a complete disaster in Week 2. The second-round pick has four interceptions to one touchdown pass and a passer rating (55.6) that ranks second-last among qualified quarterbacks.

4. C. J. Beathard, San Francisco 49ers (last week: 3rd): Starter Brian Hoyer has also been a disaster, and I doubt that new regime is married to him. If they decide to make a change, Beathard is probably the first option.

5. Nathan Peterman, Buffalo Bills (last week: 5th): The pressure’s already on Tyrod Taylor after the Bills offense failed to show up in Week 2.

6. Davis Webb, New York Giants (last week: 8th): It’d take a lot to send Eli Manning to the bench, but he’s off to a miserable start and has already been called out by his head coach.

7. Cooper Rush, Dallas Cowboys (last week: 6th: Dak Prescott struggled in his second game as an NFL sophomore, but it would take about eight games like those for anyone to suggest the UDFA out of Central Michigan should get a shot.

Not gonna happen, period: Rather than rank them ninth and 10th, we’re sparing you. Brad Kaaya of the Carolina Panthers and Josh Dobbs of the Pittsburgh Steelers won’t see the field this year unless something goes spectacularly wrong for either team.