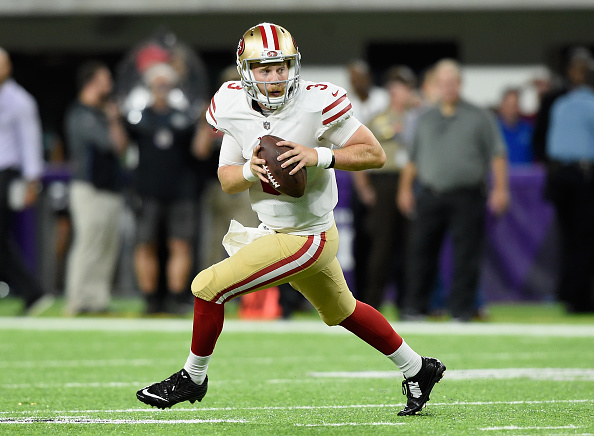 Throughout the 2017 NFL season, we’re monitoring the progress made by the league’s rookie quarterbacks by power ranking them based on their play, their circumstances or both.

Despite the fact that only four rookie signal-callers have thrown passes thus far, here’s how the rookie crop of NFL quarterbacks shakes out entering Week 7.

1. Deshaun Watson, Houston Texans (last week: 1st): As I explained here, Watson is putting together what could go down as the best rookie season ever for a quarterback. He’s a legit MVP candidate, having produced more points and touchdowns than any other player in football at the six-week mark.

2. C. J. Beathard, San Francisco 49ers (last week: 3rd): The third-round pick out of Iowa will make his first NFL start Sunday against the Dallas Cowboys. In relief of veteran Brian Hoyer in Week 6, he completed 19 of 36 passes for 245 yards, one touchdown and one pick while helping the 49ers outscore the Washington Redskins 24-12 after taking over.

3. Mitchell Trubisky, Chicago Bears (last week: 2nd): The No. 2 overall pick out of North Carolina threw just 16 passes, but limited his mistakes and was able to register his first career victory against a tough Baltimore Ravens team in Week 6.

4. Davis Webb, New York Giants (last week: 4th): Eli Manning has started 205 consecutive games and the Giants probably think they have life after winning their first game of the year in Denver. It’s unlikely Webb gets a shot anytime soon, but if they continue to suck you never know.

5. Nathan Peterman, Buffalo Bills (last week: 5th): Same as last week with the Bills coming off a bye. Since they’re competitive and starter Tyrod Taylor has been good despite lacking consistency, they won’t likely make a change this season unless or until they’re eliminated from contention in December.

6. Josh Dobbs, Pittsburgh Steelers (last week: 6th): Ben Roethlisberger hasn’t been right and there’s no telling if he’ll be able to lead this team all season. But Landry Jones is the backup, so who knows.

7. DeShone Kizer, Cleveland Browns (last week: 7th): Kizer is on pace to post the lowest qualified passer rating in the NFL this century, and he was so bad during the first five weeks that he was benched in Week 6. The bad has greatly outweighed the good, which is why he ranks behind three quarterbacks who are yet to throw a pass.

8. Patrick Mahomes II, Kansas City Chiefs (last week: 8th): Veteran starter Alex Smith has yet to thrown an interception and the Chiefs have yet to lose. Mahomes won’t get a chance to sniff the field unless something really bad happens.

9. Cooper Rush, Dallas Cowboys (last week: 9th): Dak Prescott is the clear-cut starter and that won’t likely change this season. But if he were to suffer an injury, there’s a chance they’d turn to veteran backup Kellen Moore instead.

10. Brad Kaaya, Detroit Lions (last week: 10th): After being cut by the Carolina Panthers, the sixth-round Miami product has returned to the team that drafted him. He still shouldn’t be expected to play this season.