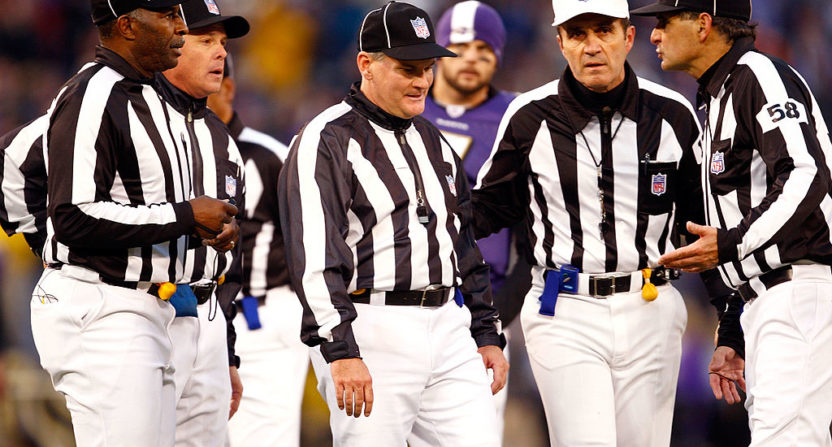 Referees, umpires, and in-game officials have never been the most popular people in sports. But given the way technology has made their flaws and mistakes stand out more than ever before, you could argue that the spotlight is on them like never before.

Recently it’s felt like every major football game, be it college or pro, has had at least one referee-related gaffe so wrong that it makes you doubt the boundaries of reality. Clear penalties not called. Clean plays called as penalties. Catches that aren’t caught and non-catches that are caught. It’s gotten to the point where U.S. Senators are debating the merits of investigating blown calls in the middle of a government shutdown. And through it all, the people who are supposed to be in charge of this stuff seem incapable of fixing it.

Mike Pereira, the rules analyst for Fox Sports and former Vice President of Officiating for the NFL, has a lot of ideas on what the league could be doing better. In an interview with NYPost.com about the state of officiating headed into Super Bowl LIII, Pereira reiterated his idea for an eighth official to join the crew: A video official.

Not a replay official, an eighth official, part of the crew, travels with the crew … and give him the ability to be on site in an enclosed booth with a technician, to look at the play on television in real time and correct obvious mistakes that are big plays and involve player safety and pass interference, and be able to correct some of this stuff. … He’s able to, in 15 seconds time, correct a mistake. I think that’s what needs to be done, quite frankly, to win back the confidence to a degree. It’ll look a little strange, but it won’t happen more than probably two or three times a game. It’s kind of a fail-safe to me.

Critics bemoan that the human element is slowly being stripped out of refereeing, but certainly, there’s a fine line between allowing for the human element and putting fail-safes in place to ensure that obvious blown calls are corrected more effectively. It’s one thing to allow for questionable holding penalties. It’s something else to allow for dubious decisions in the final moments of a game that affect the outcome.

The group of officials who will be overseeing the Super Bowl will have targets on them quite unlike any referees in pro football history. With so many big games altered by strange calls (or non-calls), everyone will be holding their breath until it happens in this one. Pereira says that he expects this crew will understand the pressure they’re under to perform.

Enormous. Enormous. You don’t think they don’t feel this? They know what’s on the line now when they step on the field. If it goes smoothly, then great. But if they end up with similar problems, then it’s gonna be even worse. But they know they’re under pressure, but I think it’s a good group, and I just don’t think we’ll have an outlier play like we had at the end of the game with New Orleans, but you never know.

For everyone’s sake, we hope not. If the Super Bowl’s ending ends up being heavily influenced by a referee decision, there might be some very big changes in store in the offseason.

1 thought on “Would a ‘sky judge’ help solve the NFL’s woeful referee problem?”