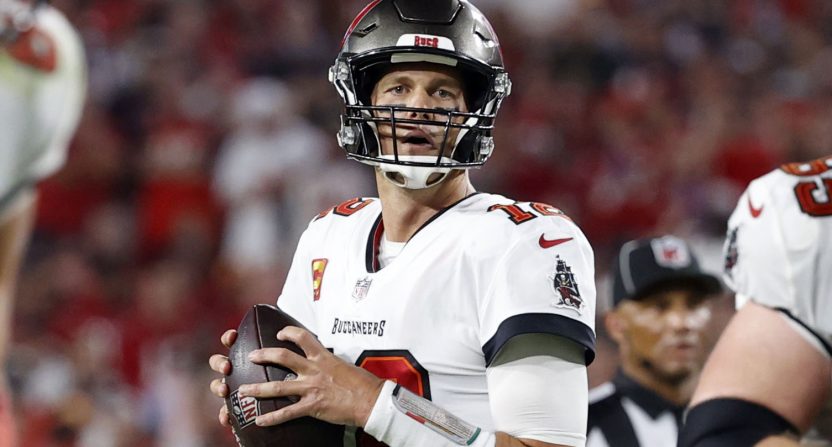 Throughout the 2021 NFL season, we’ll be ranking all 32 current starting quarterbacks from best to worst. Here’s the breakdown following Week 9.

A new team has led to the same results for Sam Darnold.

The former Jets QB was atrocious in the Panthers' loss to the Patriots on Sunday.https://t.co/pPmhlj0iRY

31. Taylor Heinicke, Washington Football Team: It’s not happening for Heinicke, who has a 3-to-6 touchdown-to-interception ratio during Washington’s current four-game losing streak.

28. Jared Goff, Detroit Lions: He’s averaging just 2.6 completed air yards per attempt. No other qualified NFL passer is below 3.0 in that metric.

26. Tyrod Taylor, Houston Texans: The veteran journeyman actually led the NFL with a QBR of 84.6 before going down early, but then he missed a ton of time before bombing in his Week 9 return. Meh.

25. Trevor Siemian, New Orleans Saints: Two touchdowns and no picks isn’t a bad starting debut in New Orleans, but we all know Siemian and his many limitations. He’s a career backup.

24. Jalen Hurts, Philadelphia Eagles: He’s not making a lot of big plays with his arm, but it by no means has been a complete mess of a sophomore season for the 2021 second-round pick.

22. Justin Fields, Chicago Bears: The rookie first-rounder came alive in a comeback effort against the Steelers. The numbers aren’t there yet, but you can see light at the end of the tunnel.

Justin Fields had more high-level throws on MNF than any rookie has had in a single game this year pic.twitter.com/9y6JvJFLw7

21. Ryan Tannehill, Tennessee Titans: It’s really been a dud campaign for the veteran, who has just 11 touchdown passes to eight interceptions.

20. Patrick Mahomes, Kansas City Chiefs: What’s wrong with the highest-rated qualified passer in NFL history? He ranks in the bottom-12 in yards per attempt.

18. Mac Jones, New England Patriots: He still isn’t making many plays, but the rookie first-rounder has an impressive 68.0 completion rate.

17. Kirk Cousins, Minnesota Vikings: Up, down, up, down. It’s a never-ending roller-coaster with this guy.

15. Teddy Bridgewater, Denver Broncos: He’s come back to earth on big-time passes and deep balls, but he still deserves to be in the middle of the pack because he’s accurate and limits his mistakes.

14. Daniel Jones, New York Giants: Jones is also finally limiting his mistakes, but the consistency isn’t there yet.

13. Baker Mayfield, Cleveland Browns: He just might be turning it around sans OBJ…again!

12. Aaron Rodgers, Green Bay Packers: The Packers keep winning, but they aren’t lighting up the scoreboard and Rodgers still had the sixth-worst bad throw rate in the NFL before missing Week 9 due to COVID-19.

10. Carson Wentz, Indianapolis Colts: Still just three picks all season for the Comeback Player of the Year candidate. He has a triple-digit passer rating.

9. Derek Carr, Las Vegas Raiders: Remember when we used to rip him for his big-play ability? Carr has a 109.7 rating on deep balls and a league-best 26 big-time throws, per Pro Football Focus.

8. Dak Prescott, Dallas Cowboys: We’ll chalk up a weak Week 9 performance to rustiness or something related to the injury that kept him out of Week 8, but it was quite ugly for Prescott. Still, he remains the league’s third-highest-rated passer.

6. Justin Herbert, Los Angeles Chargers: The reigning AFC Offensive Player of the Week has an 18-to-6 touchdown-to-interception ratio and the fifth-highest QBR among healthy NFL quarterbacks. He’s the real deal.

5. Lamar Jackson, Baltimore Ravens: That was 120 more rushing yards and three touchdowns as the Ravens came back to beat the Vikings in Week 9, but Jackson did throw two interceptions. He’s in the mix for MVP.

4. Kyler Murray, Arizona Cardinals: The sensational third-year dual-threat still ranks near the top of the league in most key categories, but he’s also thrown seven interceptions, fumbled seven times, and taken 18 sacks. He missed Week 9 due to an ankle injury.

2. Tom Brady, Tampa Bay Buccaneers: A pair of picks in a loss to a division rival wasn’t ideal before a Week 9 bye, but the 44-year-old still has a 25-to-5 touchdown-to-interception ratio and just four turnover-worthy plays.