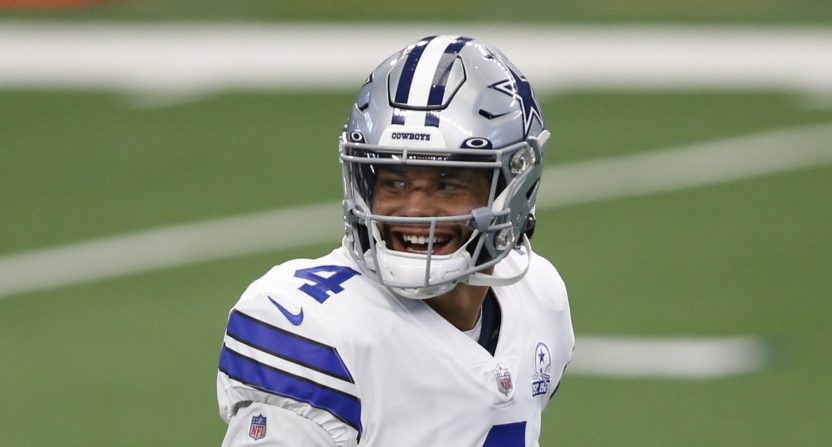 Throughout the 2021 NFL season, we’ll be ranking all 32 current starting quarterbacks from best to worst. Here’s the breakdown following Week 10.

32. Sam Darnold, Carolina Panthers: This job hasn’t officially gone to Cam Newton or P.J. Walker yet, so we’ll keep the mess that is Darnold in the bottom spot for now.

31. Trevor Lawrence, Jacksonville Jaguars: The rookie No. 1 overall pick has still thrown more interceptions (nine) than touchdown passes (eight). He has the lowest on-target rate in the NFL.

30. Zach Wilson, New York Jets: Before suffering a PCL injury in Week 7, the rookie No. 2 overall pick was the AFC’s lowest-rated passer with a 4-to-9 touchdown-to-interception ratio.

29. Jared Goff, Detroit Lions: He’s averaging just 2.5 completed air yards per attempt. No other qualified NFL passer is below 3.0 in that metric, which explains why he has the lowest QBR in the NFL. This might seriously be his last season as an NFL starter.

28. Taylor Heinicke, Washington Football Team: The 28-year-old was falling out of favor fast before exploding Sunday in a victory over the defending champions.

27. Tyrod Taylor, Houston Texans: The veteran journeyman actually led the NFL with a QBR of 84.6 before going down early, but then he missed a ton of time before bombing in his Week 9 return (the Texans were off in Week 10).

26. Justin Fields, Chicago Bears: The rookie first-rounder came alive in a comeback effort against the Steelers before a Week 10 bye. The numbers aren’t there yet, but you can see light at the end of the tunnel.

25. Matt Ryan, Atlanta Falcons: The 36-year-old had a 106.1 passer rating the last six weeks before bombing in Dallas. Same old.

24. Tua Tagovailoa, Miami Dolphins: It’s been an up-and-down sophomore season for Tua, who does at least rank second in the AFC in terms of on-target rate.

23. Ben Roethlisberger, Pittsburgh Steelers: Big Ben started slow and hasn’t exactly become a hero, but he had a solid 104.6 passer rating in his last four games before missing Week 10.

22. Teddy Bridgewater, Denver Broncos: In his defense, he’s been under a lot of pressure. Still, Bridgewater just isn’t making plays.

21. Baker Mayfield, Cleveland Browns: Just when it looked like he was turning it around post-OBJ, Mayfield bombed in a critical game. I’m losing hope.

17. Daniel Jones, New York Giants: Jones is also finally limiting his mistakes, but the consistency isn’t there yet. We’ll see how he looks coming off the bye.

16. Patrick Mahomes, Kansas City Chiefs: That was clearly a huge performance in Week 10, but Mahomes has a long way to go still. He’s 3.3 completed air yards per attempt, which ranks near the bottom of the league, and he’s tied for the NFL lead with 15 turnover-worthy plays.

15. Ryan Tannehill, Tennessee Titans: The vet has come around with solid numbers the last four weeks as the Titans continue to win. And critically, he committed just eight turnover-worthy plays all season.

14. Mac Jones, New England Patriots: You can see the progress for the league’s fourth-ranked quarterback in terms of completion rate.

13. Aaron Rodgers, Green Bay Packers: He’s not moving the needle very much at all. On the field, anyway.

12. Kirk Cousins, Minnesota Vikings: Say what you will about his consistency and his ability as a downfield passer, but Cousins has the highest PFF passing grade in the NFL right now.

11. Joe Burrow, Cincinnati Bengals: The league’s eighth-highest-rated passer really struggled in a Week 9 loss before the Bengals had Week 10 off.

10. Justin Herbert, Los Angeles Chargers: He’s lacked consistency for much of his sophomore season but remains strong on deep balls, on third down and late in close games.

9. Carson Wentz, Indianapolis Colts: He struggled against the Jaguars, but it was still a win and it’s critical that he’s still thrown just three picks this season.

7. Derek Carr, Las Vegas Raiders: The rate-based numbers aren’t all there, but Carr leads the league by a significant margin with 28 big-time throws.

6. Russell Wilson, Seattle Seahawks: There’s a degree of benefit of the doubt here, but it’s not good that the superstar bombed coming back from injury in Week 10.

5. Kyler Murray, Arizona Cardinals: The sensational third-year dual-threat still ranks near the top of the league in most key categories, but he’s also thrown seven interceptions, fumbled seven times, and taken 18 sacks. He missed Weeks 9 and 10 due to an ankle injury.

3. Matthew Stafford, Los Angeles Rams: He’s still the NFL’s QBR leader, but the 33-year-old has really come back to earth with a 69.4 passer rating in back-to-back losses.

2. Tom Brady, Tampa Bay Buccaneers: The league leader in DYAR remains in the mix despite four interceptions in back-to-back losses. Does anyone want the top spot?

1. Dak Prescott, Dallas Cowboys: He hit a bit of a wall there, with that calf injury likely playing a role. But after leading Dallas to a blowout Week 10 win, Dak has moved into the NFL lead with a 110.8 passer rating. The top spot here is admittedly totally up for grabs right now, but Prescott has the edge.