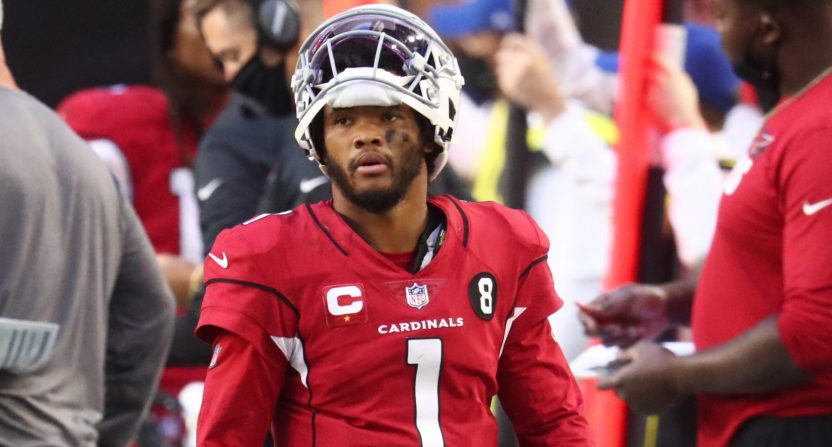 Throughout the NFL season, we’re ranking all 32 current starting quarterbacks from best to worst. Here’s the breakdown following Week 10:

32. Sam Darnold, New York Jets: It was Joe Flacco again for the Jets in Week 9 (and he looked much better than Darnold has). Darnold, who’s dealing with a shoulder injury, is the league’s lowest-rated qualified passer by a huge margin coming off the bye.

31. Drew Lock, Denver Broncos: It’s been abysmal. Not much point in having that cannon arm when you have one touchdown to five interceptions and a 30.0 passer rating on throws that travel 15-plus yards.

30. Carson Wentz, Philadelphia Eagles: The NFL’s interception leader with 12 hasn’t been himself all season.

29. Alex Smith, Washington Football Team: The comeback story is great, but that doesn’t change the fact the rusty veteran threw three interceptions in relief of Kyle Allen in Week 9 and wasn’t overly effective in Week 10.

28. Andy Dalton, Dallas Cowboys: It wasn’t pretty before he was concussed against Washington in Week 7, and he missed Weeks 8 and 9 as a result of that injury. If qualified, Dalton would be the NFC’s lowest-rated passer.

27. Gardner Minshew II, Jacksonville Jaguars: The sophomore sixth-round pick hasn’t been horrible, but he hasn’t dazzled and may be losing his starting job to rookie sixth-rounder Jake Luton.

26. Nick Foles, Chicago Bears: This isn’t working at all for Foles, who has an atrocious 52.4 rating on deep balls and ranks dead-last in the NFC with 6.0 yards per attempt.

25. Jimmy Garoppolo, San Francisco 49ers: The inconsistent Garoppolo is hurt again. Not much more you can say about Jimmy G at this point.

24. Baker Mayfield, Cleveland Browns: The inconsistent third-year No. 1 overall pick has the fourth-highest bad throw rate in the NFL.

23. Matthew Stafford, Detroit Lions: The now-injured 32-year-old ranks fifth in that same metric. Such a disappointing season for him.

22. Cam Newton, New England Patriots: Well, he finally threw his third touchdown pass of the season against the Ravens. Newton is no longer a star, but he’s played better the last couple of weeks and is still a factor with his legs.

20. Teddy Bridgewater, Carolina Panthers: The accurate veteran has the league’s top on-target rate, but just hasn’t been able to carry the Carolina offense.

19. Matt Ryan, Atlanta Falcons: He had a nice performance last week against Denver, but isn’t consistently moving the needle.

18. Daniel Jones, New York Giants: Is it finally coming together for the second-year top-10 pick? He’s turned the ball over just seven times in his last seven starts, and he’s the league’s highest-rated passer on deep throws.

17. Jared Goff, Los Angeles Rams: Goff has become the standard-bearer for “average,” which is far from ideal considering he’s a No. 1 overall pick in his prime. He might never be elite, and he’s cooled off after a strong start to his fifth NFL season.

16. Kirk Cousins, Minnesota Vikings: He’s sometimes considered a checkdown artist and it’s fair to wonder if he’d be a bottom-10 quarterback without Dalvin Cook’s kickass play, but Cousins has a 123.0 passer rating during Minnesota’s three-game winning streak. He’s also actually averaging the second-most air yards per attempt in the NFL.

15. Joe Burrow, Cincinnati Bengals: It’s been a bit of a roller-coaster ride thanks partly to a lack of support, but it’s quite impressive he’s thrown just five interceptions anyway.

14. Tua Tagovailoa, Miami Dolphins: That’s five touchdowns, zero picks, and just four sacks allowed for Tua, who has yet to lose as an NFL starter.

13. Ryan Tannehill, Tennessee Titans: The vet remains one of the league’s most efficient passers, but he hasn’t been as effective as usual during a recent rough patch for the Titans. Is the polish coming off?

12. Lamar Jackson, Baltimore Ravens: To his credit, the reigning MVP is the league’s highest-rated red-zone passer with 12 touchdowns and zero picks inside the 20. He hasn’t been the same with his arm overall, but is still on pace to push 1,000 yards on the ground.

11. Derek Carr, Las Vegas Raiders: Carr has the top on-target rate in the AFC, but he isn’t moving the ball down the field consistently enough to be considered a top-echelon quarterback.

10. Josh Allen, Buffalo Bills: It’s possible Allen isn’t totally back based on a stellar performance against a terrible Seattle defense, because he threw two picks in another rough one in Week 10. He now has an 89.8 passer rating in his last six outings.

9. Justin Herbert, Los Angeles Chargers: The lead Offensive Rookie of the Year candidate struggled a bit in Week 10, but remains a top-10 quarterback in most key categories. The future remains very bright.

8. Tom Brady, Tampa Bay Buccaneers: The 43-year-old put together a solid bounce-back performance in an impressive Week 10 victory. A 23-to-7 touchdown-to-interception ratio is superb for a man his age.

7. Ben Roethlisberger, Pittsburgh Steelers: The numbers are pretty damn impressive and his team is undefeated, but one thing to watch: Big Ben is averaging only 3.2 air yards per attempt, which ranks 30th among 33 qualified passers.

6. Russell Wilson, Seattle Seahawks: What the hell is going on? Wilson has plummeted out of the top tier of the MVP race with seven interceptions the last four weeks. He’s been sacked 11 times in back-to-back losses, and his 52.2 third-down passer rating is really disturbing as well.

5. Deshaun Watson, Houston Texans: The league’s sixth-highest-rated passer is the only bright spot in Houston.

4. Drew Brees, New Orleans Saints: Despite all of the disruptions, the 41-year-old has a 114.8 passer rating since Week 3. Now we’ll see how long he’ll be out.

3. Kyler Murray, Arizona Cardinals: His numbers still need to be better on third down and in the fourth quarter of one-score games, but that Hail Mary helped his MVP narrative. The sophomore has some magic going right now, and you can’t overlook the fact he’s one of just two NFL players with 10-plus rushing touchdowns.

2. Aaron Rodgers, Green Bay Packers: The league’s highest-rated passer has a 26-to-3 touchdown-to-interception ratio. He’s in the mix for his third career MVP.

1. Patrick Mahomes, Kansas City Chiefs: Coming out of the bye, Mahomes’ Chiefs are 8-1, his 25-to-1 touchdown-to-interception ratio is off the charts, and he’s on a better trajectory than Rodgers or Wilson. Dude has nine touchdown passes to zero picks and a 139.6 passer rating on third down, and a 143.5 rating in the fourth quarter of one-score games.