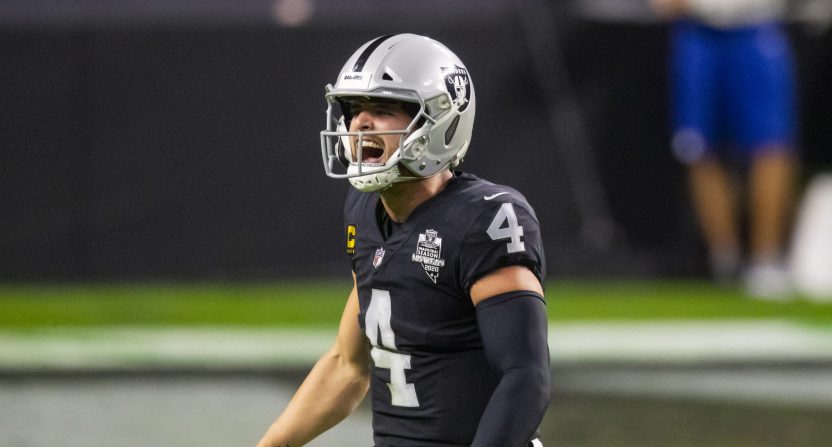 Throughout the NFL season, we’re ranking all 32 current starting quarterbacks from best to worst. Here’s the breakdown following Week 11:

32. Sam Darnold, New York Jets: We haven’t seen him in a while, but the third-year No. 3 overall pick remains the NFL’s lowest-rated passer.

30. Drew Lock, Denver Broncos: The second-year second-round pick continued to be fairly useless in Week 11 despite a win. I’d imagine he has six weeks left as Denver’s starter.

29. Carson Wentz, Philadelphia Eagles: No idea what the Eagles will do if this is the new, permanent Wentz, but he continues to lead the NFL in interceptions, sacks, and fumbles. His highest-rated game all season (91.1) was below the league average.

28. Alex Smith, Washington Football Team: The rusty 36-year-old’s story is awesome, but he’s really been no better than Dwayne Haskins Jr. So why exactly is Haskins holding a tablet on the sideline?

27. Gardner Minshew II, Jacksonville Jaguars: The sophomore sixth-round pick hasn’t been horrible, but he hasn’t dazzled and may be losing his starting job to rookie sixth-rounder Jake Luton.

26. Nick Foles, Chicago Bears: This isn’t working at all for Foles, who has an atrocious 52.4 rating on deep balls and ranks dead-last in the NFC with 6.0 yards per attempt.

25. Matthew Stafford, Detroit Lions: His Lions offense was shut out by the novice Carolina Panthers defense in Week 11. It’s unacceptable.

24. Andy Dalton, Dallas Cowboys: The former longtime Bengals starter hasn’t been great in relief of Dak Prescott, but he does have two triple-digit-rated performances under his belt.

23. Jimmy Garoppolo, San Francisco 49ers: The inconsistent Garoppolo is hurt again. Not much more you can say about Jimmy G at this point.

21. Matt Ryan, Atlanta Falcons: He completely bombed against the New Orleans Saints in Week 11. It’s been another dud season for the highly-paid former MVP.

20. Tua Tagovailoa, Miami Dolphins: It’s a work in progress, but you can’t get benched and stay in the top half of the rankings.

17. Lamar Jackson, Baltimore Ravens: This is becoming a legit fall from grace. The reigning MVP has an 83.5 rating since Week 5, and he hasn’t been as effective with his legs either. Significant regression here.

16. Tom Brady, Tampa Bay Buccaneers: Brady has a sub-10 passer rating on deep passes in losses and a triple-digit rating on those same passes in wins. He keeps bombing in primetime, against good teams, and on short rest. Don’t be fooled by his so-so broad numbers.

15. Philip Rivers, Indianapolis Colts: Consistency is a problem here, too, but the 38-year-old has posted four 105-plus passer ratings in his last five games. There’s some hope there.

14. Daniel Jones, New York Giants: His overall numbers remain terrible, but the second-year first-round pick had really cut down on his mistakes before the bye.

13. Josh Allen, Buffalo Bills: I really don’t know what to make of Allen still, but the ceiling is clearly quite high, so let’s watch this play out.

12. Jared Goff, Los Angeles Rams: Goff will never be a legend, but he knows exactly how to efficiently run that L.A. offense and has been doing a fantastic job lately.

11. Ben Roethlisberger, Pittsburgh Steelers: That 6.7 yards-per-attempt average is killing Big Ben, but the Steelers have yet to lose, and he’s one of the league’s 12 highest-rated passers anyway.

10. Kirk Cousins, Minnesota Vikings: Tough loss to Dallas in Week 11, but Cousins was still pretty good. He has a 128.2 passer rating in his last four games.

9. Ryan Tannehill, Tennessee Titans: The league’s seventh-highest-rated passer has a 22-to-4 touchdown-to-interception ratio after a triple-digit-rated performance in a crucial victory over the Ravens.

8. Justin Herbert, Los Angeles Chargers: The rookie top-10 pick was awesome in his second career victory. He’s running away with Offensive Rookie of the Year honors.

7. Russell Wilson, Seattle Seahawks: Amazingly, only three quarterbacks have now thrown more interceptions than Wilson. Still, he was good when it mattered in Week 11, and remains an MVP candidate with limited support.

6. Derek Carr, Las Vegas Raiders: Dude now has 19 touchdown passes to three picks after a fantastic performance against the Kansas City Chiefs. He really has taken his game to a new level this season, and he deserves Pro Bowl consideration.

5. Deshaun Watson, Houston Texans: Because his team sucks, nobody’s talking about the AFC leader in yards per attempt (8.5). Watson has a 114.0 passer rating since Week 3.

3. Kyler Murray, Arizona Cardinals: The rate-based passing numbers still aren’t there, but he was solid in a losing effort against the Seahawks. The reigning Offensive Rookie of the Year is now up to 29 combined passing and rushing touchdowns.

2. Aaron Rodgers, Green Bay Packers: The league’s highest-rated passer was hardly the reason the Packers lost to Indy in Week 11.