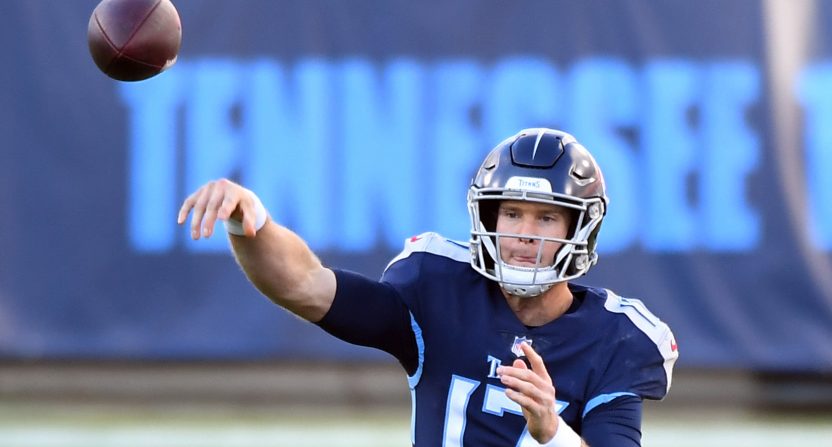 Throughout the NFL season, we’re ranking all 32 current starting quarterbacks from best to worst. Here’s the breakdown following Week 15:

32. Drew Lock, Denver Broncos: The league’s third-lowest-rated passer has the NFL’s worst qualified bad throw rate (23.5 percent). That dud against the Buffalo Bills might have sunk him.

30. Sam Darnold, New York Jets: The league’s lowest-rated passer has less support than Lock and has performed well in two of his last three games.

29. Gardner Minshew II, Jacksonville Jaguars: His numbers weren’t actually half-bad in a blowout loss to the Baltimore Ravens, but Minshew isn’t a game-changer.

28. Alex Smith, Washington Football Team: Even before his latest injury took him out of Washington’s Week 15 loss to the Seattle Seahawks, Smith was averaging just 2.6 air yards per attempt. The only qualified passer with a lower mark? Teammate Dwayne Haskins Jr.

27. Matt Ryan, Atlanta Falcons: Sure, his numbers were strong against the Bucs in Week 15, but Ryan again couldn’t get it done in crunch time. He possesses a sub-60 passer rating in the fourth quarter of one-score games.

26. Jimmy Garoppolo, San Francisco 49ers: The inconsistent Garoppolo is hurt again. Not much more you can say about Jimmy G at this point.

25. Ben Roethlisberger, Pittsburgh Steelers: Big Ben has completely lost it. He now ranks below the league average in most key categories, and only two qualified passers have averaged fewer air yards per attempt (Smith and Haskins).

24. Mitchell Trubisky, Chicago Bears: The general and advanced numbers still aren’t there, but Trubisky does deserve credit for helping to potentially save the Bears’ season. He’s posted a 99.7 passer rating in four starts since moving back into that role.

22. Matthew Stafford, Detroit Lions: He’s put together three consecutive triple-digit-rated performances, and the last one came when he was far from 100 percent, but it’s still pretty hard to trust the inconsistent veteran at this point.

19. Kirk Cousins, Minnesota Vikings: He’s the league’s eighth-highest-rated passer, but he’s just so damn hot and cold, and now he’s come back down from a hot stretch. They needed more from him in back-to-back losses to the Tampa Bay Buccaneers and Bears.

18. Joe Burrow, Cincinnati Bengals: Ryan Finley had a fun performance in the injured Burrow’s stead in Week 15. The rookie No. 1 overall pick has been done for weeks as a result of a major knee injury, but his rate-based numbers were promising under extremely tough conditions before that.

17. Jared Goff, Los Angeles Rams: He’s far too inconsistent, and is coming off a poor performance against the bloody Jets.

16. Derek Carr, Las Vegas Raiders: He threw just five passes before getting hurt in Week 15, so not much has changed here. He’s about as close to average as you’ll get.

15. Jalen Hurts, Philadelphia Eagles: Two starts into the rookie second-round pick’s career, the Eagles have scored 50 points, and Hurts has thrown four touchdown passes to zero interceptions against playoff-bound opponents. You couldn’t ask for a much better start.

14. Kyler Murray, Arizona Cardinals: The sophomore had a solid 400-yard performance as a passer against the Eagles in Week 15, but he still hasn’t been able to rediscover his rushing chops.

13. Justin Herbert, Los Angeles Chargers: It’s been an up-and-down year as expected, but that 27-to-10 touchdown-to-interception ratio is extremely promising.

12. Philip Rivers, Indianapolis Colts: At this point, it’s fair to wonder if Rivers has found his groove in Indy, and if a new setting could help him finally experience playoff success. It’s difficult to trust the old man, but the Colts have won five of their last six games, and Rivers has posted a 108.4 passer rating during that stretch.

11. Tom Brady, Tampa Bay Buccaneers: Make that a 114.0 rating in back-to-back wins for the 43-year-old Brady, who doesn’t appear to be running out of gas.

10. Dak Prescott, Dallas Cowboys: His numbers were off the charts before he suffered a season-ending ankle injury. Prescott is a franchise quarterback, period.

9. Russell Wilson, Seattle Seahawks: Far too many duds in the second half of the season for Wilson. It almost feels like he has an injury we don’t know about.

7. Baker Mayfield, Cleveland Browns: He’s up to 25 touchdown passes to just eight interceptions, only one of which has come in his last seven games. Unsurprisingly, the Browns have won five of their last six.

6. Josh Allen, Buffalo Bills: The third-year breakout star is now up to 30 touchdown passes compared to nine interceptions. He has an MVP-level ceiling, and he’s rising toward it.

5. Ryan Tannehill, Tennessee Titans: The league’s fourth-highest-rated passer has hit the triple digits in that metric in five consecutive outings for the playoff-bound Titans. He’s truly become a franchise quarterback.

4. Deshaun Watson, Houston Texans: It’s been a tough year for the Texans, but Watson is the only qualified quarterback in the league averaging more than 5.0 air yards per attempt.

3. Drew Brees, New Orleans Saints: We’ll give the far-from-fully-healthy veteran a pass for a poor performance in his return against the Chiefs.

2. Patrick Mahomes, Kansas City Chiefs: His off-the-charts numbers (36 touchdowns to five picks) don’t do justice to his dominance. Sometimes, it feels like he’s toying with the rest of the league.

1. Aaron Rodgers, Green Bay Packers: But Rodgers’ numbers are just so much better than everyone else’s. The two-time MVP has a 40-to-4 touchdown-to-pick ratio and a 118.0 passer rating, both of which are blowing away the league.