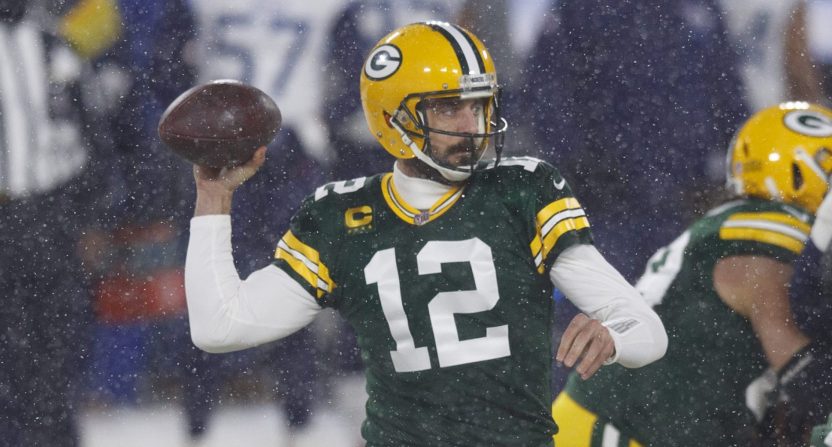 Throughout the NFL season, we’re ranking all 32 current starting quarterbacks from best to worst. Here’s the breakdown following Week 16:

32. Drew Lock, Denver Broncos: Dropped passes were a factor in Week 16, but the league’s second-lowest-rated passer just couldn’t get it done on big throw after big throw in a close game. He’s likely to be replaced this offseason.

31. Cam Newton, New England Patriots: Dude was benched in a blowout loss to the Buffalo Bills, which means he might finish his season (and his career?) with a 5-to-10 touchdown-to-interception ratio.

30. Mike Glennon, Jacksonville Jaguars: At this point, we might as well just list Trevor Lawrence in this spot.

29. Alex Smith, Washington Football Team: Even before his latest injury took him out of Washington’s Week 15 loss to the Seattle Seahawks, Smith was averaging just 2.6 air yards per attempt. The only qualified passer with a lower mark? Now-former teammate Dwayne Haskins Jr.

28. Tua Tagovailoa, Miami Dolphins: It’s just not happening for the rookie No. 5 overall pick, but this was always likely to be somewhat of a redshirt season. The Dolphins should move back to Ryan Fitzpatrick.

26. Jimmy Garoppolo, San Francisco 49ers: The inconsistent Garoppolo is hurt again. Not much more you can say about Jimmy G at this point.

25. Daniel Jones, New York Giants: Jones hasn’t been strong since returning from injury, and has taken 12 sacks the last two weeks. The 2021 season will likely make or break him.

24. Teddy Bridgewater, Carolina Panthers: He hasn’t posted a triple-digit passer rating since early-November, and 15 touchdown passes isn’t going to cut it. Bridgewater has to prove soon that he’s more than a game manager.

23. Matt Ryan, Atlanta Falcons: The veteran has “rebounded” with a 115.0 passer rating the last two weeks, but that’s coming too late, and he’s become far too inconsistent considering his lucrative salary.

22. Ben Roethlisberger, Pittsburgh Steelers: He might have seriously dropped into the bottom five if not for that impressive second half in which he took the game against the Indianapolis Colts into his own hands. Big Ben’s numbers aren’t impressive, but he might not be toast just yet.

21. Mitchell Trubisky, Chicago Bears: He still has his “Bad Mitch” moments, but there’s hope for a 26-year-old who has led the Bears to 30-plus points in four consecutive games and has a 108.5 passer rating during that stretch.

20. Matthew Stafford, Detroit Lions: Kudos to him for fighting through injuries as long as he could. Stafford is an average quarterback with above-average potential who needs a change of scenery.

17. Jalen Hurts, Philadelphia Eagles: The promise is there, especially with his rushing skills. Still, a poor passing performance in Week 16 was a reminder that he still has a long way to go.

15. Philip Rivers, Indianapolis Colts: He didn’t come through when it mattered in a big game in Week 16, and hasn’t that always been the problem?

14. Kyler Murray, Arizona Cardinals: He has a sub-90 passer rating during the second half of his sophomore season.

13. Baker Mayfield, Cleveland Browns: That was an ill-timed dud against the Jets, but Mayfield has still made strides this year. Week 17 will be crucial for him.

12. Joe Burrow, Cincinnati Bengals: The rookie No. 1 overall pick has been done for weeks as a result of a major knee injury, but his rate-based numbers were promising under extremely tough conditions before that.

11. Justin Herbert, Los Angeles Chargers: It’s been an up-and-down year as expected, but that 28-to-10 touchdown-to-interception ratio is extremely promising.

10. Ryan Tannehill, Tennessee Titans: The league’s fourth-highest-rated passer was a mess in a blowout loss to the Green Bay Packers in Week 16.

9. Russell Wilson, Seattle Seahawks: I mean, “he” technically beat the Rams in a critical game, but the defense did most of the work. Wilson hasn’t been right for quite a while.

8. Dak Prescott, Dallas Cowboys: His numbers were off the charts before he suffered a season-ending ankle injury. Prescott is a franchise quarterback, period.

6. Deshaun Watson, Houston Texans: Suddenly, despite all of the Texans’ problems, Watson is the AFC’s highest-rated passer.

5. Tom Brady, Tampa Bay Buccaneers: I was wrong to write the 43-year-old off. He has a ridiculous 130.8 passer rating over the last three weeks.

4. Lamar Jackson, Baltimore Ravens: Remember when Patrick Mahomes “regressed” after winning MVP, but still got it together down the stretch and led the Kansas City Chiefs on a Super Bowl run? This has a similar feel. Jackson has a 117.7 rating in four consecutive Baltimore wins.

2. Patrick Mahomes, Kansas City Chiefs: We’re giving the superstar the benefit of the doubt for now. But Mahomes and the Chiefs continue to cut it too close, and his sub-90 passer rating over the last four weeks has taken him out of MVP contention.

1. Aaron Rodgers, Green Bay Packers: The race is over. Rodgers’ 44-to-5 touchdown-to-interception ratio is off the charts. He might finish with the highest-rated passing season in NFL history.