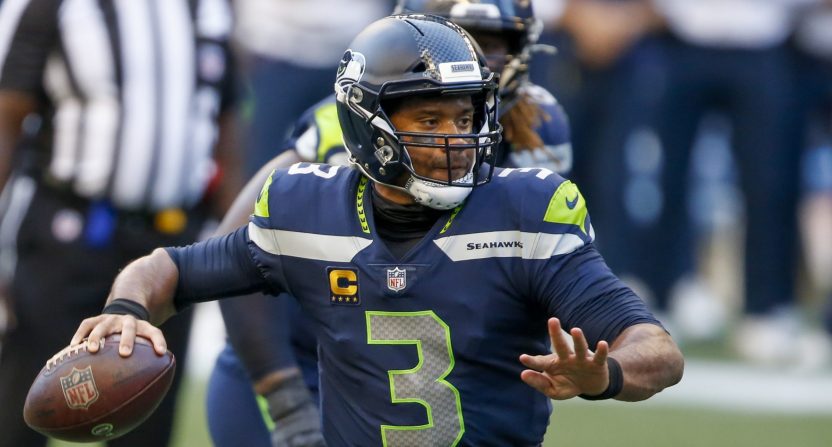 Throughout the NFL season, we’ll be ranking all 32 current starting quarterbacks from best to worst. Here’s the breakdown following Week 2.

31. Ryan Fitzpatrick, Miami Dolphins: It’s always a roller-coaster ride with Fitzpatrick, who’s also a bridge quarterback, but battled back from a terrible Week 1 performance with a triple-digit passer rating as the Dolphins went toe-to-toe with the Bills.

30. Carson Wentz, Philadelphia Eagles: His offensive line hasn’t done him any favors, but that’s no excuse when you’re supposed to be an elite quarterback. Wentz is the league’s second-lowest-rated passer.

29. Kirk Cousins, Minnesota Vikings: Meanwhile, Cousins is the NFL’s lowest-rated passer with a mark of just 61.9 and a sub-60 completion percentage. His 11-for-26, three-interception performance in Week 2 was epically bad.

28. Daniel Jones, New York Giants: Turnovers are still a problem for the sophomore. He hasn’t received much support, but also hasn’t brought his game to the next level early in 2020.

27. Sam Darnold, New York Jets: To his credit, he’s thrown just one interception. Unfortunately, that’s the only good thing we can really say about the third-year No. 3 overall pick.

26. Baker Mayfield, Cleveland Browns: Mayfield and Darnold are off to similarly disappointing starts, but at least the former has experienced more success in the past and is coming off a rebound performance against Cincinnati.

25. Dwayne Haskins, Washington Football Team: He has yet to throw a pick but has completed just 56 percent of his passes. The jury remains out in Year 2.

24. Matthew Stafford, Detroit Lions: Terribly disappointing start to the year for the veteran, who has a sub-60 completion percentage and a sub-85 passer rating in two losses. However, his receivers lead the league in drop percentage.

23. Teddy Bridgewater, Carolina Panthers: He has completed more than 70 percent of his passes, but already has two interceptions under his belt. We’ll see how he fares sans Christian McCaffrey.

22. Mitchell Trubisky, Chicago Bears: There’s no benefit of the doubt for Trubisky, who will have to keep this rolling to earn our trust. That said, his rate-based numbers put him in the middle of the pack, and only six quarterbacks have thrown more touchdown passes.

21. Philip Rivers, Indianapolis Colts: The 38-year-old bounced back from a Week 1 mess with a strong but not dominant showing in a victory over the Vikings. Still, the Minnesota defense is a mess, and it’s hard to trust him at this stage.

20. Tom Brady, Tampa Bay Buccaneers: The old man showed he still has something in him with an efficient but also far from dominant effort in a win over the Panthers. I’m still not convinced.

19. Drew Brees, New Orleans Sants: It looks like the 41-year-old might have found that cliff. He can’t hit anything at all down the field, and has yet to be a difference-maker at all for the Saints. This could be tough to watch.

18. Joe Burrow, Cincinnati Bengals: He has yet to earn his first win, but the rookie No. 1 overall pick has tossed just one interception, and he nearly led a comeback in the opener. He also has 65 rushing yards.

17. Drew Lock, Denver Broncos: The now-injured sophomore failed to take a step forward early in his 2020 campaign. Still, he’s very good at limiting mistakes, and his support wasn’t there either. We’ll give him some time when he returns.

16. Matt Ryan, Atlanta Falcons: He has thrown six touchdown passes to just one interception. He could’ve been better in the opener, but this 0-2 start isn’t on Ryan.

15. Deshaun Watson, Houston Texans: Watson is getting a break because he has been a stud with some consistency issues in the past, because he’s adjusting to life without DeAndre Hopkins, and because Houston’s early schedule is hell. His numbers aren’t abysmal; they’re just mediocre.

14. Jared Goff, Los Angeles Rams: Just like old times? Among those with two starts under their belt, only Lamar Jackson and Russell Wilson have higher yards-per-attempt averages than Goff. The two-time Pro Bowler has completed 69 percent of his passes.

13. Jimmy Garoppolo, San Francisco 49ers: He’s hurt now, but Garoppolo is the league’s sixth-highest-rated passer following a fantastic first-half performance against the Jets. Then again, it was against the Jets. Regardless, he has proven to be an above-average quarterback when healthy.

12. Ben Roethlisberger, Pittsburgh Steelers: His arm is holding up and he has t a 5-to-1 touchdown-to-interception ratio and a triple-digit passer rating for the 2-0 Steelers. No complaints, but he hasn’t faced a big challenge yet.

11. Derek Carr, Las Vegas Raiders: He’ll never get the ball down the field like other quarterbacks who are simply bigger difference-makers, but it has been clicking for the hyper-efficient Carr thus far in 2020. Plus, his Raiders are 2-0!

10. Gardner Minshew II, Jacksonville Jaguars: I still don’t know what to make of the second-year sixth-round pick, but he continues to blow away expectations. Minshew hasn’t throw a pick and is the league’s seventh-highest-rated passer.

9. Cam Newton, New England Patriots: The 2015 MVP looks close to his old self. The arm looks solid, and he has already rushed for four freakin’ touchdowns.

8. Ryan Tannehill, Tennessee Titans: I wonder if 2019’s highest-rated passer could actually keep it rolling in 2020, but his rating is a few points higher than far after a kick-ass performance against Jacksonville. Tannehill really looks like he has become a franchise quarterback.

7. Dak Prescott, Dallas Cowboys: He carried the Cowboys on an epic comeback against Atlanta, and again looks like a franchise quarterback thus far.

6. Kyler Murray, Arizona Cardinals: The top six is pretty obvious. Murray has joined the upper echelon with his dynamic play thus far in 2020. Could he push to be the league’s third consecutive sophomore MVP?

5. Josh Allen, Buffalo Bills: The league leader in passing yardage has six touchdowns, no picks, and 75 rushing yards for the 2-0 Bills. He also ranks second (among quarterbacks with two starts) to only Lamar Jackson in terms of air yards per attempt.

4. Aaron Rodgers, Green Bay Packers: Six touchdowns, no picks, and a 119.4 rating in two blowout wins for the highest-rated passer in NFL history. That’ll do.

3. Patrick Mahomes, Kansas City Chiefs: His numbers aren’t quite there with some of the fellow elite guys right now, but he has still thrown five touchdown passes to zero interceptions, and looks to be on track to compete for MVP honors again.

2. Lamar Jackson, Baltimore Ravens: The reigning MVP is averaging a league-high 6.2 air yards per pass attempt, which shows how much of the heavy lifting he does with his arm, let alone his legs.

1. Russell Wilson, Seattle Seahawks: The league’s best deep passer also leads the league with an on-target rate of 88.5, which is insane. He’s the league’s highest-rated passer, and his only pick was Greg Olsen’s fault. And what’s amazing is that he has been under pressure more than any other two-game starter thus far.