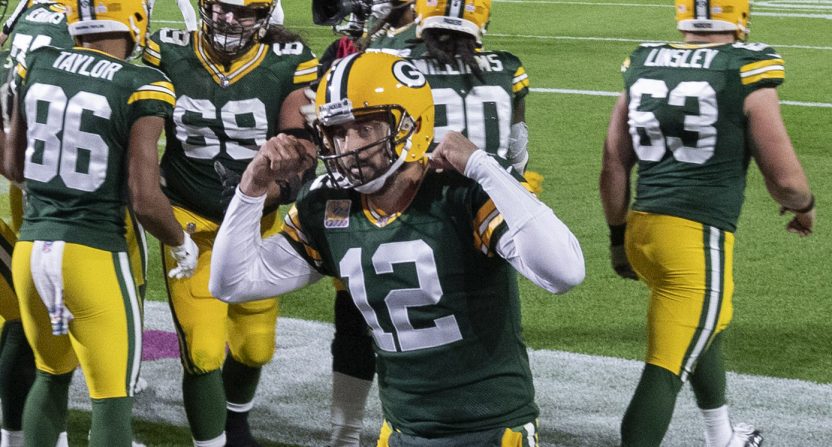 Throughout the NFL season, we’ll be ranking all 32 current starting quarterbacks from best to worst. Here’s the breakdown following Week 4.

32. Dwayne Haskins, Washington Football Team: He’s by no means the only thing that’s wrong with the WFT, but the sophomore pick will eventually have to carry that team on his shoulders to be worth that selection. That hasn’t happened yet.

31. Daniel Jones, New York Giants: Jones has limited support in the Giants offense, but faces the same predicament as Haskins in Year 2. Your team invested heavily in you and you’re not a difference-maker yet. Jones has just two touchdown passes to five interceptions.

30. Carson Wentz, Philadelphia Eagles: He’s still the league’s lowest-rated qualified passer after an improved but still less-than-stellar performance in San Francisco. A lot of support is a factor here too.

29. Ryan Fitzpatrick, Miami Dolphins: It’s always a roller-coaster ride with Fitzpatrick, who has shined at times but has still thrown more picks (five) than touchdowns (four).

28. Sam Darnold, New York Jets: He made more some more plays in a Week 4 loss to the Broncos, but the third-year No. 3 overall pick remains the league’s third-lowest-rated passer.

27. Drew Lock, Denver Broncos: Hate docking him points due to injury, but the second-year second-round pick has performed okay in a small sample and has a lot to prove when he returns.

26. Nick Foles, Chicago Bears: His first start as a Bear was no bueno, giving credence to the idea that Foles isn’t a long-term solution there or anywhere. He’s sporting a sub-60 completion percentage.

24. Cam Newton, New England Patriots: The passing numbers still aren’t there and none of this has felt particularly sustainable. Now he’s unfortunately dealing with COVID-19.

23. Matthew Stafford, Detroit Lions: The veteran just isn’t getting it done. His broad numbers aren’t bad, but he’s been off target far too often and isn’t closing.

22. Gardner Minshew II, Jacksonville Jaguars: He’s never going to be a superstar, but he has a 72.1 completion rate and twice as many touchdowns (eight) as interceptions (four) with limited support.

21. Kyler Murray, Arizona Cardinals: I’m particularly discouraged by Murray’s terrible 45.1 passer rating on third down and his 6.4 yards-per-attempt average, but he’s been a factor with his legs and has had some nice moments as well.

20. Teddy Bridgewater, Carolina Panthers: Weird start in Carolina for Bridgewater, who has the NFL’s third-highest completion percentage, but only four touchdown passes to three interceptions. Put it together and he’s as close to average as it gets.

18. Kirk Cousins, Minnesota Vikings: Not sure Cousins will ever be consistent, but he ranks third in the league with an 8.8 yards-per-attempt average following an electric, season-saving performance against Houston.

17. Jimmy Garoppolo, San Francisco 49ers: Before suffering yet another injury, Jimmy G was the league’s fourth-highest-rated passer. We’ll wait, but he’s sliding in the process.

16. Justin Herbert, Los Angeles Chargers: Meet the league’s highest-rated third-down passer. And did you see that deep ball against the Buccaneers? The kid is for real.

15. Tom Brady, Tampa Bay Buccaneers: Another pick-six was trumped by five touchdowns against the Chargers. That’s pretty ridiculous for a 43-year-old.

14. Deshaun Watson, Houston Texans: Storm clouds are surrounding the Texans, but Watson has actually posted a 110.7 passer rating over the last two weeks.

13. Baker Mayfield, Cleveland Browns: Wouldn’t blame you for not yet trusting Mayfield, but the third-year top pick has posted a 108.4 passer rating in three consecutive wins. He may be taking off.

12. Joe Burrow, Cincinnati Bengals: The rookie No. 1 overall pick has posted six touchdown passes to just one pick over the last three weeks, and he has the Bengals competing every Sunday. Pretty impressive considering a lack of pass protection.

11. Ben Roethlisberger, Pittsburgh Steelers: So far so good for Big Ben, who has thrown seven touchdown passes to one pick, and owns a triple-digit passer rating for the 3-0 Steelers. He got the week off because…

10. Ryan Tannehill, Tennessee Titans: Tannehill’s team is dealing with a COVID-19 outbreak which postponed his Week 4 meeting with Big Ben’s Steelers, so he doesn’t move much. He’s been solid across the board.

9. Jared Goff, Los Angeles Rams: A bit of a dud against the Giants, but he still posted a triple-digit passer rating. The key is he remains the league’s highest-rated passer in the fourth quarter of one-score games.

8. Derek Carr, Las Vegas Raiders: The NFL’s fifth-highest-rated passer continues to fly under the radar, and he’s even a top-10 passer on deep balls. He’s efficient, fairly consistent statistically, and extremely underrated. But he still isn’t in the top echelon.

7. Drew Brees, New Orleans Sants: The 41-year-old has been shorthanded for much of the year, but he still rediscovered his deep ball in Detroit.

6. Dak Prescott, Dallas Cowboys: His cumulative numbers are off the charts as he does his best to carry the depleted Cowboys. Dak makes big plays.

5. Lamar Jackson, Baltimore Ravens: So does Jackson, who redeemed himself after a tough performance against Kansas City with a triple-digit-rated passing effort and another strong showing on the ground in an easy win over Washington.

4. Josh Allen, Buffalo Bills: The MVP candidate has a perfect passer rating on deep balls and the AFC’s top rating in the fourth quarter of one-score games. The competition has stepped it up, but he isn’t missing a beat with 12 touchdowns to one pick.

3. Aaron Rodgers, Green Bay Packers: The league’s second-highest-rated passer made it look damn easy against the Falcons. In fact, that’s been the case all season.

2. Patrick Mahomes, Kansas City Chiefs: Make that 11 touchdowns to zero picks for Mahomes, who also made it look far too easy against a strong defense Monday night.

1. Russell Wilson, Seattle Seahawks: Still video-game numbers for Wilson, who leads the NFL with a 75.2 completion percentage, 16 touchdowns to one interception, a 9.4 yards-per-attempt average, and a 136.7 rating.