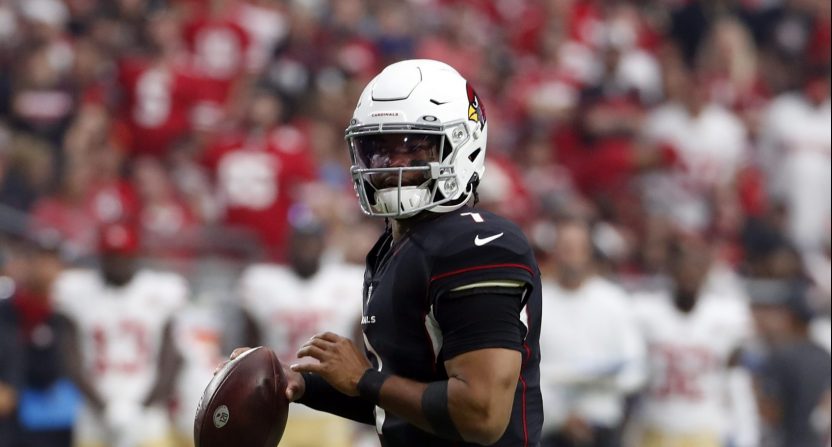 Throughout the 2021 NFL season, we’ll be ranking all 32 current starting quarterbacks from best to worst. Here’s the breakdown following Week 5.

32. Justin Fields, Chicago Bears: The sample remains small, but a QBR of 17.7 is no bueno.

31. Trevor Lawrence, Jacksonville Jaguars: The top pick has turned the corner a tad, but he’s thrown eight interceptions to six touchdown passes, and the Jags remain a mess.

30. Zach Wilson, New York Jets: The No. 2 overall pick’s rate-based numbers are superior to those of Lawrence, and he at least as a win under his belt.

29. Tua Tagovailoa, Miami Dolphins: He’s injured now, and he hardly outplayed replacement Jacoby Brissett before that. We’ll see if he can get back in the lineup this week.

28. Jared Goff, Detroit Lions: He has the lowest QBR in the league among qualified non-rookies.

27. Sam Darnold, Carolina Panthers: It was nice while it lasted, but he’s become Sam Darnold again with five interceptions the last two weeks.

26. Ben Roethlisberger, Pittsburgh Steelers: Big Ben had his best game of the season in Week 5, but he remains the league’s lowest-rated non-rookie regular starter. Ugh.

25. Ryan Tannehill, Tennessee Titans: It’s been a dud year so far from the 33-year-old. He’s already been sacked a league-high 20 times.

24. Jimmy Garoppolo, San Francisco 49ers: Even before getting hurt (again) in Week 4, Jimmy G had made zero big-time throws this season. Only a matter of time before Trey Lance is there for good.

23. Jalen Hurts, Philadelphia Eagles: He’s been less of a factor with his legs and has been inconsistent with his arm.

22. Matt Ryan, Atlanta Falcons: To his credit, the semi-washed 36-year-old is 21-for-26 with a 129.2 passer rating in the fourth quarter of one-score games. He’s coming around after a horrendous start to the year.

19. Taylor Heinicke, Washington Football Team: After an ugly performance against the Saints in Week 5, only Lawrence has committed more turnover-worthy plays than Heinicke.

18. Jameis Winston, New Orleans Saints: The broad numbers are strong, but he has to improve on that 60.3 completion rate, which ranks dead-last among qualified non-rookies.

17. Tyrod Taylor, Houston Texans: He’s hurt now, but the veteran journeyman actually led the NFL with a QBR of 84.6 before going down. He was doing a really done a solid job with little support, but rookie replacement Davis Mills is also coming off his best game yet.

16. Mac Jones, New England Patriots: By far the best rookie passer so far, Jones hasn’t made a lot of big-time plays, but he leads the AFC with an 83.2 on-target rate.

15. Joe Burrow, Cincinnati Bengals: The sophomore No. 1 overall pick ranks fourth in the NFL with an on-target rate of 82.4.

14. Carson Wentz, Indianapolis Colts: He’s still made just one turnover-worthy play all season, and he’s coming off back-to-back strong efforts. Might Wentz be back?

13. Teddy Bridgewater, Denver Broncos: He’s been under a ton of pressure and isn’t 100 percent coming off an injury, but Bridgewater is still a top-10-rated passer with just one interception.

12. Kirk Cousins, Minnesota Vikings: Not sure I trust him still, but Cousins does have the fourth-best PFF grade at the quarterback position.

11. Aaron Rodgers, Green Bay Packers: His on-target rate of 71.4 is still far too low, but the broad numbers put him in the second tier for now and there’s time to pounce.

10. Derek Carr, Las Vegas Raiders: We’ll see what happens to him without Jon Gruden, but Carr still leads the league with 19 big-time throws, per Pro Football Focus. He’s coming off a weak performance against the Bears, and it’s possible he’ll fall off now.

9. Patrick Mahomes, Kansas City Chiefs: The Chiefs haven’t been right, but that’s mainly on the defense. Mahomes has the top QBR in the NFL.

8. Lamar Jackson, Baltimore Ravens: Remember what they used to say about his arm talent? Jackson leads all quarterbacks with 5.8 completed air yards per attempt.

7. Matthew Stafford, Los Angeles Rams: It helps that he’s been under so little pressure in Sean McVay’s offense, but that doesn’t change the fact Stafford is an MVP candidate as the league’s third-highest-rated passer for a 4-1 team.

6. Tom Brady, Tampa Bay Buccaneers: That’s now a 15-to-2 touchdown-to-interception ratio for Brady, who has made zero turnover-worthy plays all season.

5. Justin Herbert, Los Angeles Chargers: PFF’s No. 3-ranked quarterback has 13 touchdowns to three picks for the 4-1 Bolts. He’s a star.

3. Josh Allen, Buffalo Bills: He started slow and needs to be a little more accurate overall, but those are nitpicks for an MVP candidate leading the league’s highest-scoring offense.

2. Russell Wilson, Seattle Seahawks: He’s still the NFL’s highest-rated passer by a relatively high margin, but we won’t see him for a while as a result of a finger injury.

1. Kyler Murray, Arizona Cardinals: The league’s fourth-highest-rated passer also ranks near the top of the NFL with a 101.0 rating on deep balls, a 123.5 rating on third down, and 120.2 rating in the fourth quarter of one-score games.