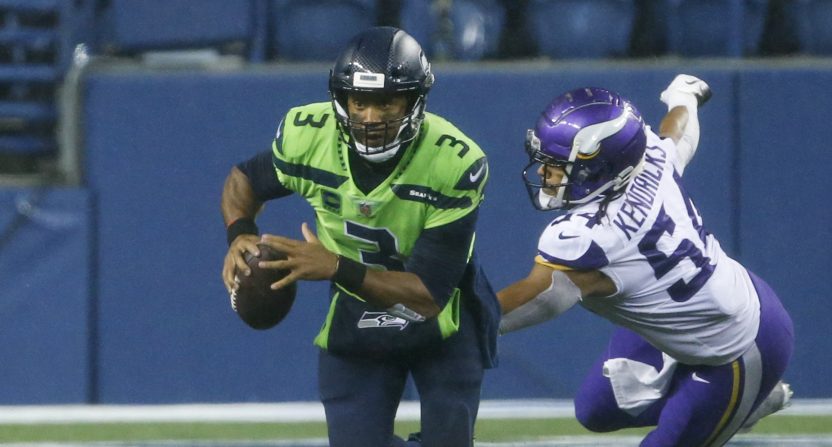 Throughout the NFL season, we’ll be ranking all 32 current starting quarterbacks from best to worst. Here’s the breakdown following Week 5:

32. Kyle Allen, Washington Football Team: It might only be a matter of time before Dwayne Haskins’ replacement is replaced by Alex Smith, or even Haskins. Allen performed okay in limited action in Week 5, but was the NFC’s lowest-rated qualified passer in 2019.

31. Daniel Jones, New York Giants: The sixth pick of the 2019 draft has thrown just two touchdown passes (to five picks) in five games for the 0-5 G-Men. The support isn’t there. but he still has to do a lot better than that.

30. Carson Wentz, Philadelphia Eagles: The league’s lowest-rated passer has thrown an obscene nine interceptions in five games, only one of which has resulted in a win.

29. Sam Darnold, New York Jets: He may or may not be Wally Pipped by Joe Flacco, but you’d have to think the now-injured bust-in-the-making is hanging on by a thread at Gang Green’s starter. He’s the league’s third-lowest-rated passer.

28. Drew Lock, Denver Broncos: Hate ranking him this low while he’s hurt, but the second-year second-round pick has performed okay in a small sample, and has a lot to prove when he returns.

25. Matt Ryan, Atlanta Falcons: What a dud season from the former MVP. He ranks 20th or worse in completion percentage, yards per attempt, and passer rating. And the Falcons are 0-5.

24. Ryan Fitzpatrick, Miami Dolphins: It’s always a roller-coaster ride with Fitzpatrick, but the 37-year-old has completed more than 70 percent of his passes, and already has three triple-digit-rated performances under his belt. Not bad for a bridge starter.

23. Andy Dalton, Dallas Cowboys: There’s little doubt that the longtime former Cincinnati Bengals starter is one of the league’s top backups, but mediocre numbers for half a decade running don’t get him out of the bottom realm here in place of the injured Dak Prescott.

22. Joe Burrow, Cincinnati Bengals: He’s taking far too many sacks, and a lot of them are actually on him. At least he’s limiting his big mistakes and has looked decent in key moments.

21. Cam Newton, New England Patriots: The passing numbers still aren’t there, and none of this has felt particularly sustainable. Now he’s unfortunately dealing with COVID-19, and the Pats haven’t played since our last installment.

20. Matthew Stafford, Detroit Lions: The veteran just isn’t getting it done. His broad numbers aren’t bad, but he’s been off target far too often and isn’t closing. He was off in Week 5.

19. Kirk Cousins, Minnesota Vikings: No complaints about his last couple of performances, but the pick total is still too high, the variation is too dramatic, and the overall numbers aren’t pretty.

18. Gardner Minshew II, Jacksonville Jaguars: Minshew might never be a superstar, but the sophomore sixth-round pick is hardly the reason Jacksonville has lost four in a row. He has a solid 10 touchdown passes to four picks this season.

17. Kyler Murray, Arizona Cardinals: The second-year No. 1 overall pick remains the league’s lowest-rated third-down passer, but he’s completed 17-of-18 passes for seven touchdowns and no picks in the red zone.

15. Baker Mayfield, Cleveland Browns: He hasn’t been consistent or accurate enough, and he got away with a pair of interceptions in Week 5. He’s not quite where most Browns fans would probably like him to be.

14. Jimmy Garoppolo, San Francisco 49ers: Not going to hold that abysmal Week 5 performance against Jimmy G, because he wasn’t healthy and he was damn efficient before getting hurt in Week 2. The benefit of the doubt still exists here.

13. Tom Brady, Tampa Bay Buccaneers: That wasn’t pretty against Chicago, but the Bears have a strong defense, and Brady’s numbers continue to be damn strong for a 43-year-old.

12. Justin Herbert, Los Angeles Chargers: The rookie top-10 pick’s deep ball is a work of art, and he’s the league’s highest-rated passer on third down. He’s running away with Offensive Rookie of the Year honors.

11. Deshaun Watson, Houston Texans: Despite tumult and limited support in Houston, Watson has a 110.1 passer rating in his last three games.

10. Ben Roethlisberger, Pittsburgh Steelers: He’s still not in the top echelon, but is up to 10 touchdown passes to one interception. We’ll see if that holds up when the competition becomes more fierce.

9. Lamar Jackson, Baltimore Ravens: He still has a triple-digit passer rating and is one of the most unique offensive threats in the league, but Jackson has clearly experienced regression in Year 3.

8. Ryan Tannehill, Tennessee Titans: The league’s highest-rated passer since the start of 2019 has nine touchdown passes to one interception for the 4-0 Titans after dominating the Bills Tuesday night.

6. Drew Brees, New Orleans Sants: He made plays when it mattered Monday night, but is rarely a game-changer with his arm. He’s on the fringe of the top tier at age 41.

5. Josh Allen, Buffalo Bills: The AFC’s highest-rated passer entering Tuesday came back to earth with a tough outing against Tennessee, but his broad numbers are still off the charts.

4. Derek Carr, Las Vegas Raiders: It’s time to stop underestimating Carr, who doesn’t have a killer arm and isn’t consistently dominant, but now has 11 touchdowns to one pick and the league’s fourth-highest passer rating for a winning team.

2. Aaron Rodgers, Green Bay Packers: The league’s second-highest-rated passer made it look damn easy against the Falcons. In fact, that’s been the case all season, and he was off on a bye this week.

1. Russell Wilson, Seattle Seahawks: What more do you want from the league’s highest-rated passer and the quarterback for the sport’s only 5-0 team?