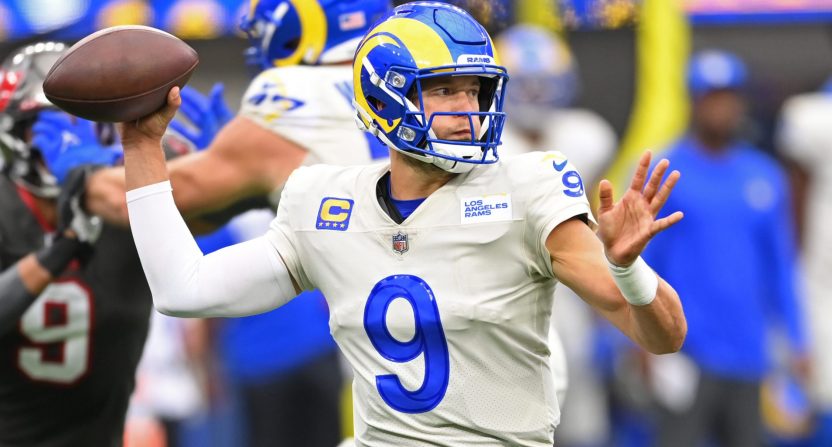 Throughout the 2021 NFL season, we’ll be ranking all 32 current starting quarterbacks from best to worst. Here’s the breakdown following Week 8.

31. Taylor Heinicke, Washington Football Team: It’s not happening for Heinicke, who has a 3-to-6 touchdown-to-interception ratio during Washington’s current four-game losing streak.

28. Jared Goff, Detroit Lions: Yikes. He’s averaging just 2.6 completed air yards per attempt. No other qualified NFL passer is below 3.0 in that metric.

27. Taysom Hill, New Orleans Saints: We’re placing him here by default because he’s yet to make a start in place of the injured Jameis Winston.

26. Justin Fields, Chicago Bears: The rookie No. 11 overall pick gets out of the bottom tier thanks to a 19-for-27 passing day that included 103 rushing yards. You get the feeling he’s breaking out before our eyes.

25. Jimmy Garoppolo, San Francisco 49ers: He was solid in a Week 8 win over the Bears but has still made just two big-time throws all season. He’s not a game-changer.

24. Jalen Hurts, Philadelphia Eagles: It hasn’t been consistent or pretty, but the sophomore has quietly racked up 17 big-time throws, which ranks fourth in the NFL at Pro Football Focus.

23. Matt Ryan, Atlanta Falcons: He was coming around a bit before laying an egg again in a Week 8 loss to the Panthers. He’s a below-average NFL quarterback.

22. Ben Roethlisberger, Pittsburgh Steelers: Ditto for this future Hall of Famer, who has defined “meh” all season in Pittsburgh.

21. Ryan Tannehill, Tennessee Titans: Two picks for another disappointing 30-something-year-old quarterback in Week 8. He hasn’t been right all year. We’ll see how he reacts to that huge Derrick Henry injury in Tennessee.

20. Baker Mayfield, Cleveland Browns: He’s not the main problem in Cleveland but still has the fifth-highest bad throw rate in the league.

19. Tua Tagovailoa, Miami Dolphins: Back to earth in Week 8 for the second-year first-round pick, who struggled again and still has just 10 deep completions all season.

18. Patrick Mahomes, Kansas City Chiefs: He may be the highest-rated passer in NFL history, but it’s hard to list him above the middle of the pack considering that he ranks tied for third in football with a ridiculous 12 turnover-worthy plays so far. Something isn’t right.

17. Carson Wentz, Indianapolis Colts: He was really putting it back together before blowing up in a critical spot in Week 8. No bueno.

16. Teddy Bridgewater, Denver Broncos: Nice rebound in Week 8 for the oft-uninspiring veteran. He ranks fourth in the NFL with a 70.4 completion rate.

14. Kirk Cousins, Minnesota Vikings: No consistency as per usual for the frustrating 33-year-old.

12. Justin Herbert, Los Angeles Chargers: The sophomore’s hit somewhat of a midseason rut but remains the highest-rated qualified deep passer in the NFL.

11. Tyrod Taylor, Houston Texans: The veteran journeyman actually led the NFL with a QBR of 84.6 before going down early. He was doing a really done a solid job with little support, and now he’s on his way back.

10. Aaron Rodgers, Green Bay Packers: The Packers keep winning, but they aren’t lighting up the scoreboard and Rodgers still has the sixth-worst bad throw rate in the NFL.

7. Joe Burrow, Cincinnati Bengals: The sophomore now leads the AFC with an on-target rate of 80.8 percent.

5. Dak Prescott, Dallas Cowboys: The numbers are there in basically every category for Prescott, who has Dallas in the Super Bowl picture but missed Week 8 due to injury.

4. Russell Wilson, Seattle Seahawks: He’s still the NFL’s highest-rated passer by a considerable margin, but he’s still out due to a finger injury.

3. Josh Allen, Buffalo Bills: The broad numbers aren’t quite there yet, but he gets it done deep, on third down and in the fourth quarter of close games. He also leads the league’s highest-scoring offense.

2. Tom Brady, Tampa Bay Buccaneers: A pair of picks in a loss to a division rival isn’t ideal, but the 44-year-old still has a 25-to-5 touchdown-to-interception ratio and just four turnover-worthy plays.

1. Matthew Stafford, Los Angeles Rams: The 33-year-old is officially dominating with a 22-to-4 touchdown-to-interception ratio. He leads the league in QBR, DVOA and ranks second to only Wilson with a passer rating of 118.0. I’m beginning to despise the fact he wasted so many years in Detroit.