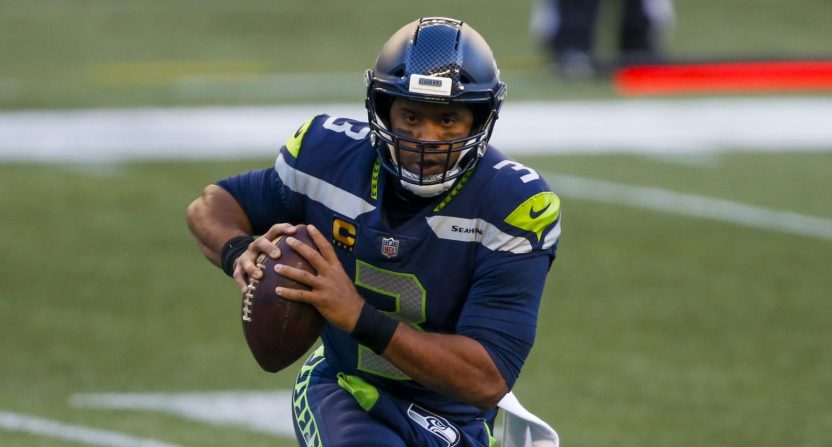 Throughout the NFL season, we’re ranking all 32 current starting quarterbacks from best to worst. Here’s the breakdown following Week 8:

32. Sam Darnold, New York Jets: The third-year No. 3 overall pick is running out of rope. He’s the league’s lowest-rated passer by a wide margin, and the Jets are 0-8.

31. Daniel Jones, New York Giants: Despite a nice drive late in a loss to the Tampa Bay Buccaneers, that was a horrendous performance on national television Monday night. So many brutal misfires on relatively easy throws and two more interceptions.

30. Cam Newton, New England Patriots: It just hasn’t worked out. His legs have helped, but that 2-to-7 touchdown-to-interception ratio is a joke.

29. Carson Wentz, Philadelphia Eagles: The hell happened to the former MVP candidate? Wentz was abysmal against a bad Dallas Cowboys defense in Week 8. He leads the league with 12 interceptions, and is the NFL’s third-lowest-rated passer.

28. Kyle Allen, Washington Football Team: He hasn’t played as well as the numbers indicate and doesn’t get much of the benefit of the doubt based on last season, but Allen actually has four touchdown passes to one pick and a passer rating just shy of the triple digits. He’s coming off his bye.

27. Andy Dalton, Dallas Cowboys: It wasn’t pretty before he was concussed against Washington in Week 7, and he missed Week 8 as a result of that injury. If qualified, Dalton would be the NFC’s lowest-rated passer.

26. Nick Foles, Chicago Bears: It’s become ugly for Foles, who hasn’t played as well as Mitch Trubisky and ranks ahead of just Darnold with a 6.1 yards-per-attempt average. He won’t likely keep this job all season.

25. Gardner Minshew II, Jacksonville Jaguars: I’ll give him this — he’s been superb on third down, and he’s always been good in key moments. But outside of those spots, the second-year sixth-round pick is mediocre. He’s coming off a bye, and is now out with a thumb injury.

24. Drew Lock, Denver Broncos: The league’s second-lowest-rated passer redeemed himself with a strong comeback performance in the second half against the Los Angeles Chargers, but he was a mess prior to that. The jury remains out.

23. Tua Tagovailoa, Miami Dolphins: We’re keeping him out of the bottom tier based on his ceiling, but he didn’t do much of anything in his debut as a starter in Week 8.

22. Jimmy Garoppolo, San Francisco 49ers: Another poor performance, and he’s hurt again. Not much more you can say about Jimmy G at this point.

21. Kirk Cousins, Minnesota Vikings: Dalvin Cook did most of the work in a Week 8 victory over the Green Bay Packers, but the inconsistent Cousins was at least efficient in a limited manner. There’s some room for him to get it together.

19. Matthew Stafford, Detroit Lions: Like Ryan and Philip Rivers, it’s been a roller-coaster ride with Stafford too. He took five sacks as the Lions were blown out by Rivers in Detroit in Week 8.

18. Philip Rivers, Indianapolis Colts: It’s been a roller-coaster ride for the veteran, but he’s thrown six touchdown passes to one interception in back-to-back wins. There’s some hope there, but can we really trust him at this point in his career?

17. Baker Mayfield, Cleveland Browns: The fluctuations have become ridiculous for Mayfield, who laid an egg against the Las Vegas Raiders one week after sending a message in a victory over the Cincinnati Bengals. That’s now four games with a sub-73 rating, four games with a rating of 100 or higher.

16. Teddy Bridgewater, Carolina Panthers: Consistency has been a problem for Bridgewater, but his numbers are solid overall.

14. Josh Allen, Buffalo Bills: Allen remains one of the league’s 10 highest-rated passers, but dating back to Week 5 he’s got a sub-80 passer rating and as many interceptions as touchdown passes (four).

13. Lamar Jackson, Baltimore Ravens: The reigning MVP hasn’t put together a truly strong passing performance since Week 2. He’s clearly regressed; he now ranks in the bottom 12 in yards per attempt. His rushing prowess keeps him above the median here.

12. Joe Burrow, Cincinnati Bengals: The top pick has really put it together with five touchdowns to one pick the last two weeks as the Cincy offense has come alive. He’s already an above-average quarterback.

11. Ben Roethlisberger, Pittsburgh Steelers: He has the Steelers rolling at 7-0, but he’s got the seventh-lowest yards-per-attempt average in the league.

10. Justin Herbert, Los Angeles Chargers: The rookie sensation is now the league’s eighth-highest-rated passer. His deep ball is a thing of beauty, and he’s been excellent on third down.

9. Drew Brees, New Orleans Saints: The 41-year-old has a 111.2 passer rating the last five games despite the absence of Michael Thomas.

8. Tom Brady, Tampa Bay Buccaneers: Meanwhile, the 43-year-old Brady has 17 touchdown passes to one interception and a 5-1 record the last six weeks.

7. Kyler Murray, Arizona Cardinals: Those legs are such a huge factor; Murray has already rushed for a ridiculous 437 yards and seven (seven!) touchdowns. But that deep ball is improving as well, and he’s 22-for-27 with 10 touchdowns and no picks in the red zone. He doesn’t move following a bye.

6. Deshaun Watson, Houston Texans: Houston sucks, but Watson now leads the league with a yards-per-attempt average of 8.8. He’s building what might be his best season yet. He’s also stays put following a bye.

5. Ryan Tannehill, Tennessee Titans: We’ll give the league’s fifth-highest-rated passer a break for a rough performance against Cincinnati.

4. Derek Carr, Las Vegas Raiders: He hasn’t done much the last two weeks, but he didn’t need to in order to beat the Raiders. He’ll need a strong performance soon to remain in the top echelon, but the numbers keep him there for now.

3. Aaron Rodgers, Green Bay Packers: Rodgers wasn’t the reason the Pack lost to the Vikings in Week 8. With 20 touchdowns to two interceptions, he remains an MVP candidate.

2. Patrick Mahomes, Kansas City Chiefs: But Mahomes has him beat with a 21-to-1 touchdown-to-interception ratio for the 7-1 Chiefs.

1. Russell Wilson, Seattle Seahawks: The league’s highest-rated passer by a wide margin moves back into the top spot after a dominant performance against the 49ers in Week 8.