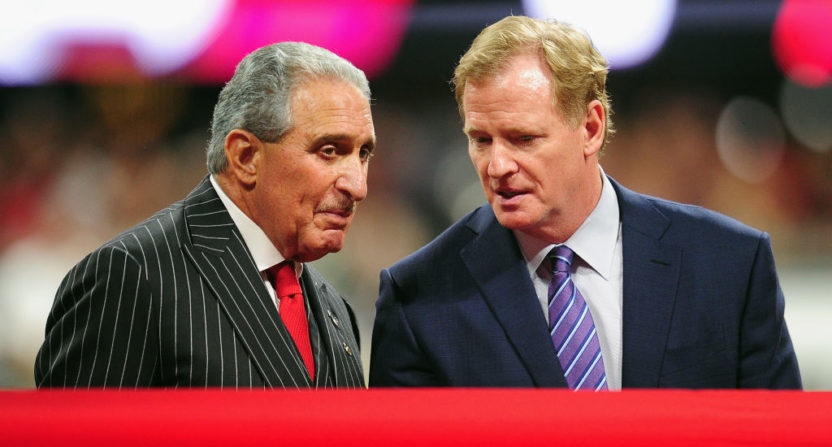 One thing is clear: the national anthem protests aren’t going away anytime soon. NFL officials, several owners and a group of players met this week to discuss how the league, its organizations and its players should address the issue moving forward. According to the New York Times, the league did not instruct teams and players to end the protests .

Through the first two weeks of the season, the protests had been confined to half a dozen players with a handful of others showing gestures of solidarity. Then President Donald Trump called for “son of a bitch” NFL players who are protesting to get “fired,” and as you can probably guess if you didn’t already know, players, team officials and league executives didn’t appreciate those remarks at all.

In Week 3, over 200 NFL players, including some full teams, knelt or showed solidarity by linking arms. The movement also spread to MLB with A’s catcher Bruce Maxwell kneeling last Saturday with his hand over his heart.

According to the NY Times, the general consensus around the NFL is to not push Trump, who’s known for making inflammatory, off-the-cuff comments. But it appears the league is honorably defending its players’ rights above all else, as this quote from Falcons owner Arthur Blank shows:

“The players have a right to speak their minds, but on the other hand, it can make it difficult because there isn’t anyone in America who doesn’t want to honor America,” Arthur Blank, the owner of the Atlanta Falcons, said in an interview. “You talk to other owners and the commissioner, they feel the same way, they support the players.”

Part of the issue is ever since Trump’s scathing comments about the NFL and its players, the protests’ original message about social injustice has become shrouded. For example, during preseason Packers quarterback Aaron Rodgers previously said he supports players who choose to protest during the anthem in “a battle for racial inequality.” But after Thursday night’s win over the Bears, Rodgers addressed media and called the protests “an invitation to show unity in the face of some divisiveness from the top.”

"As much as some people want us to just shut up and play football … sports and politics have always intersected." Strong take from Rodgers pic.twitter.com/c4e1kEBD8R

And even with the NFL sticking up for its players, they can’t provide protection from pissed off fans. Titans tight end Delanie Walker posted to Instagram that he’s been receiving death threats ever since he defended NFL players’ right to protest. While many Americans have called the protests unpatriotic and disrespectful to the military, Walker explained he’s protesting to honor the armed forces after gaining inspiration during a USO Tour in the Middle East this past spring:

The Tennessee Titans fans are the best in the NFL. What we do on the field every Sunday would mean nothing without knowing we are supported by the city of Nashville and the fans that have been by our side over the years. One of the many things I gained from spending time in the Middle East on the NFL’s USO Tour this spring, is an appreciation for America’s core values and an even greater appreciation for the men and women that defend those values.  In being asked about our team’s decision on Sunday to stay in the locker room for the National Anthem, I used strong words to defend our right to make our own choices. Both my choice to spark dialogue for positive change and the fans’ choice to attend our games. It’s that freedom of choice that makes our democracy the envy of many around the world. The death threats that my family and I have received since my comments are heartbreaking. The racist and violent words directed at me and my son only serve as another reminder that our country remains divided and full of hateful rhetoric. These words of hate will only fuel me in my efforts to continue my work reaching out to different community groups, listening to opposing voices, and honoring the men and women in the Armed Forces who risk their lives every day so that we may have this dialogue. I am proud to represent the many faces of Titans fans and believe that only through a more respectful discourse can we achieves the goals of unity, peace and racial equality that I know we all strive for. Titan Up

That’s a beautiful message from Walker, but unfortunately his message about the military — one that other players have expressed, too — does not appear to have gotten through to those who have criticized this movement. Those who are protesting believe they are standing up for the flag and the military, not disrespecting them.

Even if you disagree with the protests’ original message about racial inequality or the manner in which they’ve been executed, using hateful, violent and especially racist language won’t move this conversation anywhere.