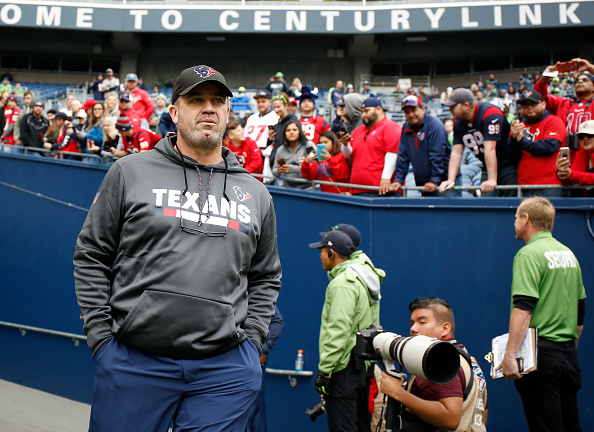 This Weekend in NFL Stupid highlights the dumbest moments and decisions in football throughout the season. For Week 8, we start with TWIS’s returning champion.

It feels as though O’Brien gets mentioned in this column more than any other figure in the NFL. The Houston Texans head coach makes poor roster decisions and isn’t good with situational stuff either. It’s hard to believe he actually decided just eight weeks ago that Tom Savage was better suited to start at quarterback than Deshaun Watson, who is putting together a superstar-caliber season. But it’s just as troubling that he didn’t allow Watson to put Sunday’s epic battle with the Seattle Seahawks away.

Leading 38-34, Houston had a first down at the two-minute warning. But Seattle had three timeouts, which meant the Texans would need at least one first down in order to avoid giving Russell Wilson and Co. one more chance. They proceeded to hand the ball off on three consecutive plays to running back Lamar Miller, who picked up eight yards on three predictable runs.

Why not let your mobile MVP candidate quarterback roll out and make a play or three? Watson rushed eight times for a team-high 67 yards on the day, and he’s rushed for more yards this season than any other quarterback in football. Can anyone imagine him being shut down on three straight play-action rollouts? The ball should have been in Watson’s hands. That was Houston’s best chance to pick up that game-sealing first down, which never came.

A punt and three Seahawks plays later, the Texans were handed a tough-to-swallow loss.

Everything the Lions did inside of field-goal range

Detroit became the first team in NFL history to score fewer than 20 points despite racking up 475 yards of offense and committing zero turnovers, according to PFT’s Michael David Smith. You have to do some awfully stupid things in order for that to happen.

They lost 20-15 to the Pittsburgh Steelers despite reaching the Pittsburgh 33-yard line on seven separate drives. They failed to reach the end zone on all seven of those possessions, even though they reached the red zone on five of them. They settled for five field goals and were stopped twice on fourth-down gambles, despite the fact a field goal would have given them the lead in the first situation and would have cut Pittsburgh’s lead to two points on the second occasion.

Jim Caldwell and offensive coordinator Jim Bob Cooter badly botched multiple opportunities in the second half of a close, winnable home game. It was just dumb.

Weird offensive approach from the Raiders

Derek Carr and the Oakland Raiders ripped down the field to score on their first possession Sunday against the Buffalo Bills, and then Carr completed a 40-yard deep pass to Michael Crabtree on the first play of their next drive. But then Carr threw just one deep pass for the remainder of the first half and just three for the remainder of the game, even though said game was slipping away from them.

“I can’t answer to that,” head coach Jack Del Rio said afterwards when asked about the lack of home-run swings, per PFT and the East Bay Times. “I wasn’t — nobody was saying, ‘Don’t take a shot’ — I can’t speak to that right now.”

But they also ditched the running game in the second half — DeAndre Washington and Jalen Richard had just two carries for 16 yards in the third and fourth quarters — so it’s not clear what exactly they were doing while trying to keep up with the Bills in a huge road game.

The New England Patriots did not beat the Los Angeles Chargers

No, the Chargers once again beat themselves. And it wasn’t just about this…

What the heck is Travis Benjamin doing ? This only works in the backyard #Chargers #Patriots #LACvsNE #NFL pic.twitter.com/n26QHhAroE

But also their unwillingness to take chances and roll the dice. Take, for example, their very first drive, when they had a 4th-and-1 at the New England 33-yard line but settled for a 51-yard field goal with a so-so long-distance kicker. That kicker — Nick Novak — missed, and the Chargers were left with nothing while giving the Pats a short field.

You simply have to give that a shot, because there’s little risk associated with going for it and the reward has a chance to be huge when you’re up against a superior opponent.

“I think it was a long fourth-and-one; it was more like a fourth-and-two almost,” head coach Anthony Lynn said Sunday, per Mike DiGiovanna and Dan Woike of the Los Angeles Times. “So yeah, I thought we should kick at that point. I felt comfortable with the kicking game.”

The lead to the story from the Times said it best: “You don’t beat the defending Super Bowl champions on the road by playing timid, conservative football.

But dude, you have to go down immediately. What if that ball is dislodged from your hands? The Chicago Bears could have been given a fresh set of downs with good field position and about 75 seconds remaining in a one-score game.

This time, they inexplicably called timeout with 42 seconds on the first-half clock when facing a 3rd-and-goal at the Minnesota Vikings’ 1-yard line. If you still have a timeout in your back pocket (they did), there’s no reason to call timeout there. Instead, you let the clock run down to about 10 seconds before either taking a timeout or running the third-down play. DeShone Kizer scored on the third-down play, but that left the Vikings 34 seconds with which to work.

Sure enough, they got a field goal in before half time.

NFL coaches are so damn stupid.

The Jets led for much of the day Sunday against the defending NFC champion Atlanta Falcons. But with that being the case in a windy rainstorm, they barely attempted to run the ball. They handed it off just 21 times compared to 37 pass plays, with just nine runs on 30 plays from scrimmage in the second half.

Veteran running back Matt Forte was surprised, and he wasn’t afraid to state that publicly which is usually a bad sign.

“I’m definitely surprised by that, because we knew the weather was going to be like that,” Forte said, per PFT and Manish Mehta of the New York Daily News. “It continued to rain the entire game. I think we only ran the ball 20 times. (There) should have been at least one person getting 20 carries — something like that — with the way the weather was. I thought we were going to grind them out on the ground like that, but it ended up not turning out that way.”

The fact penalties can’t be challenged

Because no face mask was grabbed here…

This was called a face mask in the Bears game and it’s the worst penalty ever. pic.twitter.com/ioDgMEUsz2

And this wasn’t offensive pass interference…

Tyrell Williams does a good job to get out of the way, two Patriots collide, and OPI wipes out a Chargers TD. pic.twitter.com/U8uhVutjkO

But both calls were made, there was nothing either the Saints or Chargers could do about it and both calls could have been difference-makers.

Why not let coaches challenge whatever the hell they want?