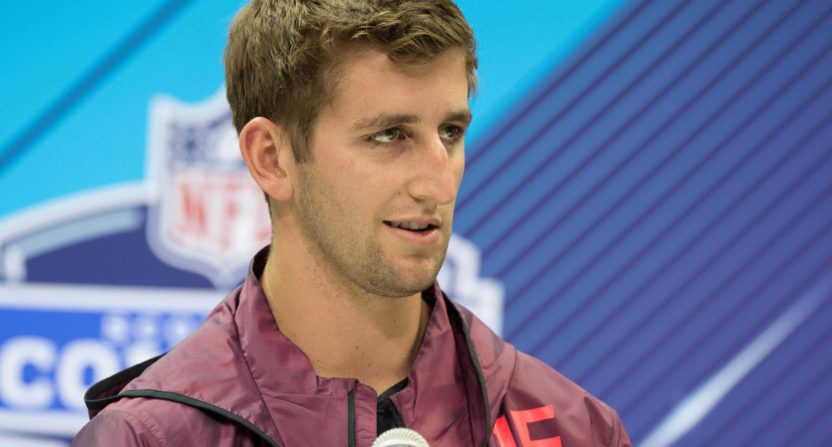 Josh Rosen checks all the boxes of an NFL quarterback. He stands 6-feet-4, scouts rave about his mechanics, he’s sufficiently athletic, he put up gaudy college stats in a major conference, his intelligence is unquestioned, etc.

And yet reports suggest that NFL teams are wary of Rosen. Why? Because he’s too smart, or something.

This passage from a Peter King column published on SI.com Monday sums up a bizarre, counterintuitive and borderline offensive whisper campaign against Rosen that threatens to damage the quarterback’s draft stock.

I had never met Rosen before Saturday, but this is what I was led to believe listening to the proverbial NFL grapevine:

1. Football isn’t that important to him, because he’s a rich kid whose mom is the great-great-granddaughter of the founder of Penn’s prestigious Wharton School of Business, and whose dad is a renowned spinal surgeon, and who once put a hot tub in his college bedroom. Rich kids can’t have the same drive as lower-middle-class kids.
2. He’s a crappy leader, he questions authority, and his teammates roll their eyes at him.
3. He’s too smart for his own good. He’s anti-Trump (once wearing a hat to a Trump golf course with “F— Trump” on it), into politics and cares a lot about the planet. Quarterbacks need to be myopic. Football only.

Rosen can’t be a top prospect because his family has money? He’s too smart for the most cerebral position in sports? Opposing the president makes him less likely to be an effective quarterback? This isn’t football scouting, it’s amateur psychoanalysis, and it’s embarrassing for the entire league.

Dissing Rosen for things entirely unrelated to football fits with a grand tradition of teams evaluating prospects on all the wrong criteria. Scouts and executives’ stubborn focus on this kind of nonsense is what leads to outrageous and offensive questions in pre-draft interviews and provocative leaks to the media.

In a way, it’s also what leads to racist draft commentary. Teams (and therefore reporters and analysts) are so focused on finding archetypes that they forget to look for good football players. Lamar Jackson supposedly can’t be an NFL quarterback because he runs. Josh Rosen allegedly can’t be one because he thinks.

As many have pointed out, Rosen is not the only quarterback to share his views on Trump via a strategically placed hat, and the other guy who did it is widely acknowledged as the greatest quarterback in NFL history. Rosen is also far from the first NFL player to come from money or the first to have a head on his shoulders. To act like those traits mean he can’t throw an oblong ball into tight spaces is disingenuous and silly. It’s punishing him for having and voicing opinions — about politics, the NCAA or whatever — that don’t conform perfectly to the NFL worldview. It’s knocking him being just a bit different.

Obviously, there are fair gripes about Rosen, as there are about every draft prospect. If people who have worked with Rosen have found him difficult to coach, as King reports, that’s something NFL teams should take into consideration. But intelligence and individuality do not disqualify players from football success, as much as league executives seem to wish they did.