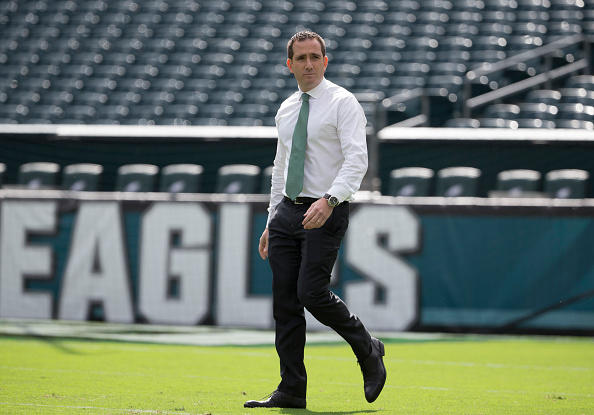 Hello folks, I’m here to be your translator. See, several NFL teams made some rather major moves ahead of Tuesday’s NFL trade deadline. But because they’re NFL teams, they all remained relatively tight-lipped about the rationale for said moves.

I know how to speak NFL franchisese, however, so here is what each team was saying when they pulled the trigger on their in-season moves…

What they said: “Look, I just met Jimmy for the first time. There’s a lot of options at our disposal. We’re just getting to know him. Honest to God, we need to get him in the playbook, so that’s where we’re going to start, first thing’s first. But, I can tell you, second-round picks are very valuable in this league, particularly where we are at as an organization. And so, this is a guy we wanted and were willing to give what we thought was a very valuable commodity in exchange for him. So, we’re excited moving forward that he’s going to be a part of our future.” — General Manager John Lynch.

What they meant: “Brian Hoyer was a stopgap and we’re already pretty damn sure rookie third-round pick C.J. Beathard isn’t the long-term answer. We were willing to part with a second-round pick now in order to give eight starts to a guy we feel really strongly about, and we’re hoping he proves he can be our franchise quarterback. But if he doesn’t, we will at least have the ability to move on without any financial implications and can then focus on either Kirk Cousins or the top of the first round of the draft.”

Patriots trade away Garoppolo in exchange for a second-round pick

What they said: “His career is moving forward, he’s a talented individual. He is a great person to coach. I met with him weekly. As his career moves forward, we have to look at our team, this year and beyond. We probably had in my mind, the best quarterback situation in the league for the last 2 1/2 years. It is just not sustainable the way things are set up. Not something we wanted to walk away from. I felt we rode it out as long as we could, over a period of time, explored every option possible to sustain it. At this point, felt like we had to make a decision. Very complex situation on multiple levels. This is really the last window that we had, we did what we felt was best for the team. There were many things involved in this whole process.” — Head Coach Bill Belichick.

What they meant: “We love second-round picks more than anything in the world except maybe discipline and punctuality. We realize we could have gotten more for Garoppolo in the offseason, but we had to make sure our 40-year-old starter didn’t finally hit a wall in the 2017 offseason. Once we confirmed that Tom Brady was again an MVP candidate and we realized that our defense sucks enough that we’re unlikely to win without him regardless of who our backup is, it made sense to get something for Jimmy G. before he hits free agency in 2018.”

What they said: “We’re just really excited to add the player and his leadership and the guy. He’s a man’s man.” — General Manager John Schneider.

What they meant: “Holy shit, we just added a three-time Pro Bowler in order to address our biggest weakness and add protection for our oft-banged-up franchise quarterback. This dude is a beast who immediately makes us better, especially since we didn’t have to give up any active players due to the fact cornerback Jeremy Lane failed his physical. This is a dream come true, but why the hell was nobody else willing to outbid us?”

What they said: Nothing.

What they meant: “We were on fire without Brown so why try to fix what ain’t broken? And if you’re not going to fix what ain’t broken, why not get something for him? Plus, he challenged our beloved team owner over his protest comments, he’s been the most outspoken member of the team for years and he held out for the first seven weeks of the season. Can’t be seen letting an inmate run this prison!”

What they said: “You’re always looking to win now and win in the future, and I honestly think that’s what this does.” — General Manager Brandon Beane.

What they meant: “Honestly, we figured we were at least a year away from contending when we traded away Sammy Watkins and Ronald Darby in August. Turns out we were wrong, and now we’re 5-2 and our fans are fired the hell up. We have to try to compete in what is a wide-open division in a wide-open season, and we probably wouldn’t have been able to do that with Zay Jones and Deonte Thompson playing large roles in the offense.”

What they said: “This was more about getting more speed on the field. We’ve got some young players who we think have some real ability. Kelvin was a very good player and was productive for us. It was more getting a mix of skill sets on the field and more speed.” — General Manager Marty Hurney.

What they meant: “We know Benjamin was quarterback Cam Newton’s favorite target but this is a business, we don’t feel losing Benjamin will be the difference between winning it all and not winning it all, and his contract was set to expire after next season anyway. We’d rather not pay him the $8.5 million he was due for his fifth-year option in 2018, especially because our offense is moving in a new direction with Christian McCaffrey and Curtis Samuel. Plus, this was a chance to do a favor for our old pal Brandon Beane!”

What they said: “If there are opportunities to improve our team and improve where we’re at, we have a responsibility to the people on the field, the people off the field, our fans, to evaluate everything.” — Executive VP of Football Operations Howie Roseman.

What they meant: “We’re gunning for a championship, LeGarrette Blount is about to turn 31, we lack proven and healthy talent beyond that in the backfield, Ajayi has the ability to be a game-changer and a fourth-round pick was a small price to pay even if he doesn’t make much of an impact.”

What they said: “Our thing is it was time for us to move on. We’d had conversations about kind of what we were going to do down the road. We felt like this was a good opportunity. We put some feelers out to see where other teams were at, and we’ve got some younger players there that we feel like we were going to move forward with and that was kind of the decision we came to.” — Head Coach Adam Gase.

What they meant: “We aren’t going to compete this year anyway and after studying him carefully we believe Ajayi will begin to decline. We’ve also openly called him out for his work ethic without explicitly using his name. On that note, anyone interested in Jarvis Landry? Oh, it’s too late?”