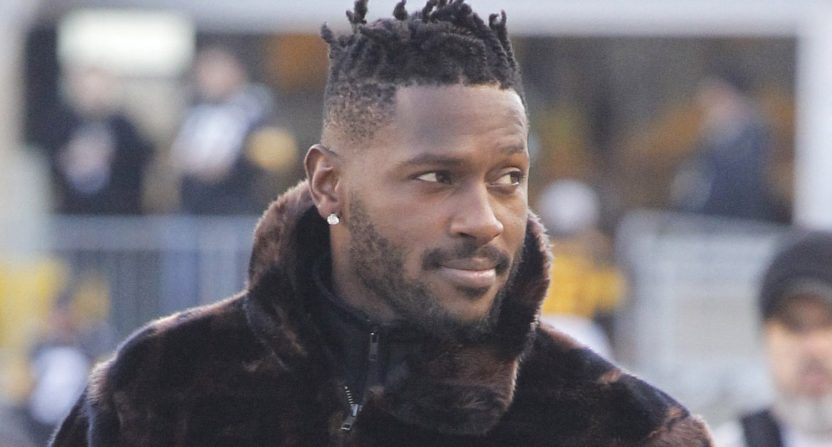 Kevin Colbert had no reason to deliberately compress his estimate. If anything, you’d imagine he’d be compelled to exaggerate. And yet when the Pittsburgh Steelers general manager was asked last week how many teams had inquired about a trade for on-the-market wide receiver Antonio Brown, he said he’d heard from only three organizations.

In other words, more than 90 percent of the rest of the NFL hadn’t inquired about the most accomplished active receiver in the NFL.

That goes to show how toxic Brown is.

It’s not surprising there’s at least some interest in the four-time first-team All-Pro, but the reality is he’s just not worth the risk at this point. All indications are he wants a new contract with significant guaranteed money elsewhere, and he’s proven to be a nuisance, a headache, and an unpredictable prima donna who could easily turn on his next team as quickly as he turned on his last one.

It’d be one thing if Brown were still really good, but that’s not the case either.

Steelers head coach Mike Tomlin reportedly told his players that those in charge in Pittsburgh tolerated Brown’s behavior and his infamous tardiness “because of what he brings on the field.”

“But the minute production stops,” he added, per ESPN.com’s Jeremy Fowler, “you don’t overlook it.”

He’s no longer as productive, and they’re no longer overlooking it.

Brown’s on the wrong side of 30 now, and his rate-based numbers — yards per catch, receptions per game, yards per game and even, to an extent, catch rate — plummeted in his age-30 season.

Precedents indicate he’ll continue to decline on paper and otherwise, which is why this would be an ideal time to dump the unstable Brown.

Aside from the cap hit, that explains why the Steelers are down to make a deal.

Speaking at the NFL Scouting Combine on Wednesday, Colbert wouldn’t rule out a potential trade to an AFC North rival. It’s another indication the Steelers can’t find a dance partner, and that shouldn’t be particularly surprising.

Antonio Brown is losing stature on and off the field. He’s likely to do more harm than good going forward, especially when you take into account what he’d cost in a trade and against the payroll.

Stay away. Stay far away.