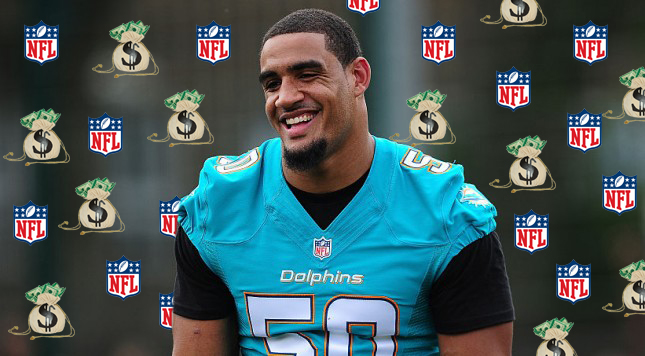 The opening days of NFL’s free agency period is typically its most expensive, and this year was no exception. With teams having more money than ever to spend, thanks to a $155 million per-team salary cap and numerous carrying over cash from previous seasons, there was no doubt that the dollars were going to fly, and will continue to fly in the days ahead.

Of the 65 deals inked as of 5pm ET on Thursday—and the 53 for which complete financial details are available, teams have spent a whopping $1,257,945,000 in contract dollars, with just under half—$587,285,000—of it guaranteed to be spent, either by actually paying the player’s guaranteed money in full over the course of the contract or by eating that money later on in dead cap space following roster cuts.

Unsurprisingly, teams with the most to spend were the teams that spent the most cash in free agency’s early days. In terms of contracts offered, the New York Giants lead the way in 2016 free agent spending, at $193.75 million, thanks mostly to the five-year, $72 million deal given to defensive end Olivier Vernon and the five-year, $46.25 million contract signed by defensive tackle Damon Harrison.

The Jacksonville Jaguars are second, with $174.3 million in spending, the Oakland Raiders are third, spending $135.5 million so far, the Houston Texans rank fourth, spending $126 million and the Philadelphia Eagles round out the $100 million club at No. 5, spending $101.5 million thus far. With more deals to come.

This spending, of course, is reflective of the entire contract values and not what teams will be on the hook for, in a lump sum immediately. And this money from all these contracts won’t come close to being paid out in full. What matters most during free agency is the guaranteed money. And the five teams that led in total contract value are, of course, the ones to have the most of it committed to guaranteed cash.

The Giants have $105.3 million in new guaranteed money, the Jaguars $65.7 million, the Raiders $64.4 million, the Texans $63.0 million and the Eagles, $51.6 million. That means 54.4 percent of the total new contract value the Giants have given out since Wednesday is guaranteed; for Jacksonville, that percentage is just 40.45 percent. Meanwhile, the Denver Broncos have guaranteed 71.4 percent of their new contracts; but that is a relative number, as their only signing thus far has been offensive tackle Donald Stephenson to a $14 million deal that has $10 million of it guaranteed (this does not factor in Von Miller’s franchise tag figure of $14.129 million just yet because he has not signed it).

Throwing money around, though, does not guarantee a team’s success. Championships, as they say, are not won in free agency and typically the teams that post consistent winning records are those who are quiet during this time and careful with their money, instead building through the draft and younger players.

Of the five teams that have spent the most in free agency in the past 10 years, only one, the Eagles, have a record better than .500, according to ESPN. While it’s hard to doubt the Giants’ additions of Vernon and Harrison won’t make the defense—and thus the whole team—better, typically splashing out for big-ticket free agents on a regular basis isn’t the path to more wins. But three of those five high-spending teams may have learned their lessons from the spending follies of the past—the Miami Dolphins haven’t made many significant signings (though they did extend an $18 million offer sheet to Denver Broncos RFA running back C.J. Anderson and have taken on Byron Maxwell’s contract from Philadelphia via trade), and Washington and the Cleveland Browns have yet to spend any money.

Team spending has yet to reach 2015’s level, when a total of $1,982,599,552 was spent on contracts and $796,606,999 on guaranteed money. And this is also a much thinner free agency class when it comes to big-money talent. But it would not be surprising if, once the dust completely settles a few months from now, that overall spending and guarantees are up from a year ago.

The Giants have already outspent 2015’s biggest spenders, the New York Jets, by around $15 million and the Jaguars are presently just $4 million below last year’s top mark. With the salary cap continually rising and teams having greater opportunities not just to spend but to stockpile cash for future years, contract values and guaranteed spending will also go up, even in instances where it may not be smart to spend, or at times, overspend. It’s the business season in the NFL and, as one wideout might put it, business is booming.

NFL Top Spenders, By Team, As of Thursday 5PM ET (in Millions)