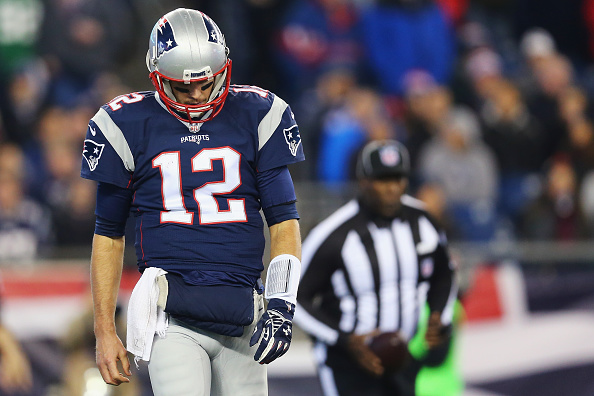 There are 32 teams in the NFL and 20 will be ending their seasons in a month. The next four weeks will go a long way in determining which 12 make the playoffs and which sorry losers will be spending the new year fishing, golfing or doing anything other than playing postseason football.

Thirty-two teams, 12 playoff participants, but how many actual contenders are left this season? How many of those 32 that will turn into 12 will be the one to hold up the Lombardi Trophy in Feburary? Six? Five?

Before looking at the remaining contenders, it’s rather clear that we’ve hit on some pretenders who will still manage to make the playoffs this season.

Indianapolis may make the playoffs by nature of being in the worst division in football, and yes I know the NFC East still exists. The Colts were trounced on Sunday night by the Steelers to drop to 6-6. Yes, Andrew Luck is hurt, but even if he comes back in time for the playoffs, should the Colts still win the division—they are tied with the horrifically mediocre Houston Texans who lost to Buffalo on Sunday—Luck has no help around him to dare contend.

Kansas City could make the playoffs too, but they are exactly what Andy Reid’s teams are almost every year: decent enough to compete, but not good enough to win anything. You can throw the Jets in that mix too if you’d like. I would not, but right now they are in line to make the playoffs over the Pittsburgh Steelers (more on them in a bit).

In the NFC, the whole damn conference feels like pretenders except for two teams. The Minnesota Vikings were 7-2 and looked like they could run away with the NFC North, but have crashed back down to Earth, losing two of their last three to fall out of first place in their division for basically the first time all year.

The Falcons looked like the best team in football for the first five weeks, but have lost six of their last seven games, with the only win coming over lowly Tennessee. The NFC East will have to have a team in the playoffs, and with a Dallas victory on Monday night that could be, once again, the Philadelphia Eagles, who just beat New England to get to 5-7. That’s unbelievable, really.

Now for the contenders, knowing this list will get whittled down over the next four weeks as well.

Still, the rash of injuries to key members of New England’s squad should be no excuse for the mistakes made by the special teams and defense and, well, offense that led to a horrible loss against a team that gave up 90 points in its two previous games combined.

Moreover, the Patriots have fallen out of the first-round bye with their second loss in as many weeks, tied on record but trailing in the head-to-head and other tiebreakers with Cincinnati and Denver.

And yet, the Patriots are probably still the favorites to get back to the Super Bowl.

The AFC really only has three Super Bowl contending teams, and each has impossible-to-ignore flaws.

New England is a triage unit. Denver has the best defense in football, but on offense they are 20th in yards per game and 19th in points. It’s amazing that replacing Peyton Manning with Brock Osweiler has made the team this much better, but the quarterback controversy heading into the playoffs will come—and is looming, as no matter how well the youngster plays, it’s naïve to think Manning won’t find a way to become part of the story over the next six weeks­—adding fuel to the fire of an inexperienced signal caller and Gary Kubiak in the playoffs, a combination that should give every Broncos fan pause.

Cincinnati has looked as good as anyone in the NFL for the majority of the season, and after dismantling the Browns on Sunday, Marvin Lewis’s squad is in a great position for a bye, home field and path right to the Super Bo—

Okay, I couldn’t do it. I couldn’t say Super Bowl and Cincinnati in the same sentence—okay I just did, yes—because as good as the Bengals are, and as well as quarterback Andy Dalton is playing this season, he and Lewis have combined for exactly zero playoff wins in their careers.

It may be unfair to constantly point that out, and one season’s failure does not hamper another’s success. Still, six playoff games in 12 years and zero wins is telling us something; probably that Cincinnati has to win one game before we can even consider them winning three.

And that leaves one team that isn’t even in the playoffs if the season ended today (breaking news: it doesn’t) in the Pittsburgh Steelers, surely the best 7-5 team on the planet when everyone is healthy.

The Steelers managed to go 2-2 in the weeks Ben Roethlisberger was out, including a win over the Arizona Cardinals, and yet, they lost to Baltimore and Kansas City, with their other three losses coming to New England, Cincinnati and Seattle. They’re on the fringe of being a contender, at best, but with that offense—even without Le’Veon Bell—they will be a tough out when (not if) they make the playoffs. The Steelers are the team nobody wants to play in the playoffs. We can see that coming already.

Now let’s count the contenders in the NFC together. There’s, one, the undefeated Carolina Panthers, the class of the NFL with the quarterback in Cam Newton that is a sure lock for the MVP this season. Newton accounts for too much of the Panthers’ offense that it could be a problem come playoff time, but right now, his play and Jonathan Stewart running the ball and that defense make Carolina the odds-on favorite to make the Super Bowl.

The Panthers are 16-1, including the playoff loss in Seattle last season, since Cam Newton almost died in a car crash one year ago this week. It’s amazing he’s even able to walk, let alone play football at this level.

That said, the Panthers have just one win in the postseason in the Ron Rivera era, coming at home against the Arizona Cardinals with me on my couch eating a salami sandwich at quarterback. The Bengals and Panthers making the Super Bowl seems like a likely scenario given the circumstances of the season, but given history, it looks impossible.

There’s, two, the Arizona Cardinals, who look like the best of the rest, as they’re the only other team in the NFC with ten or more wins.

Arizona is number one in total offense in the NFL with MVP (runner-up) candidate Carson Palmer, and the Cardinals’ defense is ranked fourth in the league behind Denver, Seattle and Carolina.

The Cardinals are good, and they’ll have a chip on their shoulder from last year having to go to 7-9 Carolina to play the Wild Card round despite 11 wins.

Arizona at Carolina for the right to get to the Super Bowl would be some contest, but there are two other teams with a chance to muck that up, and they have a combined nine losses so far this year.

Nobody will want to play Green Bay in the playoffs. Sure they have some bad losses and they’re a Hail Mary away from being out of the playoff race, but they did win on Thursday and they do lead the NFC North and they will make the playoffs and will probably get to host Minnesota while Seattle will have to travel to the NFC East winner and it will be all set up for Aaron Rodgers going into Carolina in the divisional round and I don’t care if the Panthers are still undefeated at that point and the Packers have nobody left to throw to or run the ball I’m not sure many people will pick against Rodgers in that situation. Phew.

The same can be said for Russell Wilson and the Seahawks.

Seattle is 5-1 since losing at home to Carolina, and they’re playing like a different team, even without Marshawn Lynch in the lineup. Seattle is 7-3 since Kam Chancellor returned from his holdout, working their way to second in total defense in the NFL behind Denver, and in the last three weeks the combination of offense and defense has been Super Bowl-caliber, let alone payoff-ready.

Sure, they let up 456 yards and 30 points to Ben Roethlisberger and the Steelers two weeks ago, but they had four interceptions that game and Wilson threw for five touchdowns and more than 350 yards himself that game. They have something other Seattle teams may have lacked: balance.

This Sunday the Seahawks absolutely annihilated the Vikings in Minnesota, holding Adrian Peterson to 18 yards on 8 carries, giving up the only score on a kickoff return. Wilson threw for three scores with no turnovers and Thomas Rawls rushed for more than 100 yards and a score.

Seattle looks scary right now, even with tight end Jimmy Graham on the shelf for the rest of the year, and they are an absolute contender as the run to the playoffs heats up.

So with four weeks to go the list of actual contenders looks like this, then: New England, Denver, Cincinnati, Pittsburgh, Carolina, Arizona, Green Bay and Seattle. That’s it. Those are the teams that look like they have a chance to win the Super Bowl.