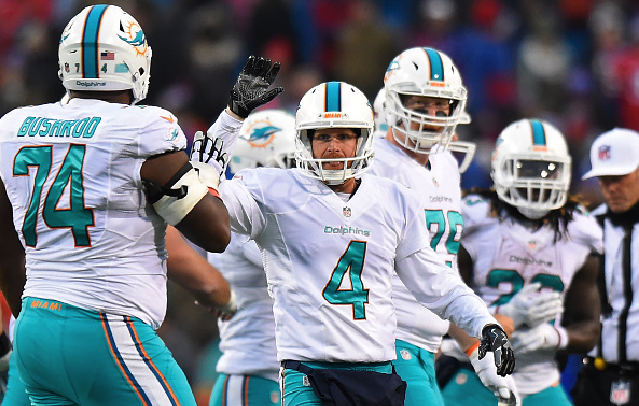 No matter which, if any, winter holidays you and yours celebrated this weekend, there was plenty of reason to stand up and cheer about NFL football. From shocking upsets to glorious victories, season-ending door slams and surprising doors opening, a lot of great games kept us in suspense from Christmas Eve until the wee small hours of Dec. 26.

On Thursday night, the New York Giants were who we thought they were: A team with a very good, but not incredible defense and a wide receiver great enough to overcome his flawed quarterback’s many flaws — most of the time.

This was not that time, though, as the Philadelphia Eagles both ended the Giants’ late-season push for an NFC East title and introduced serious doubt as to whether the Giants can make any noise in the playoffs.

For a brief, glorious LeSean McCoy-driven instant, it looked like the Buffalo Bills were going to keep their playoff hopes — and Rex Ryan’s job — alive. Then the Bills defense failed to prevent a game-tying field goal, Bills kicker Dan Carpenter missed his second attempt of the evening and Dolphins kicker Andrew Franks nailed the overtime game-winner.

In one of the few predictable results, the Atlanta Falcons jumped out to a 20-3 lead over the Carolina Panthers before putting it in the cooler and winning 33-16. Washington did what they needed to do against the frisky Chicago Bears, winning 41-21 and staying alive in the playoff race.

If there was any doubt that the proverbial switch had been flipped in Green Bay, it was utterly and thoroughly removed by Aaron Rodgers and company on Saturday. Though the Vikings were able to move the ball and score against the Packers defense, Rodgers’ 347 yards and four touchdowns were too much to overcome — as were two lost Vikings fumbles.

Though the final score, 38-25, was relatively close, the only time the Vikings held the upper hand was a scary moment in which Rodgers took a sack, crumpled, then lay on the turf collecting his breath. A minute later, he was on the sideline giving the thumbs-up while the crowd chanted “MVP!”

After reports he’d been hospitalized with kidney stones, Jets head coach Todd Bowles toughed it out and skippered his crew. Maybe he should have let someone else take the heat for the 41-3 roasting his Jets suffered at the hands of the red-hot New England Patriots.

The happiest Christmas of all came to Cleveland, where a blocked Josh Lambo field goal attempt with minutes to go, and this Lambo miss with seconds to go, let the Browns hang a shingle in the “W” column:

Josh Lambo : 1/3 FG's (Had one blocked & missed the game-tying FG at the buzzer) pic.twitter.com/FydKCBh89b

Poor Tennessee Titans fans. After massive, season-saving upsets of the Denver Broncos and Kansas City Chiefs, their team just had to beat the two-win Jaguars to set up a winner-take-all season finale against the lifeless Houston Texans.

Somehow, the talent-stocked Jaguars we’d spent all spring talking up finally showed up to EverBank Field, walloping the Titans 38-17 and losing promising second-year quarterback Marcus Mariota to a broken fibula.

To literally add insult to injury, the impolite Houston Texans went out and beat the Cincinnati Bengals 12-10. So instead of win-and-in, Titans backup Matt Cassel will play a game of absolutely no consequence next week. Good thing he’s got a lot of experience with those.

Oakland Raiders fans thought they got the gift they wanted, a 33-25 win over the Indianapolis Colts. A season-ending broken tibula suffered by quarterback Derek Carr, though, has Raider Nation feeling like the kids whose grandmothers got them “Bass Jaxx” headphones instead of Beats By Dre:

A logo just close enough to Beats by Dre to trick grandmothers into greatly disappointing their grandkids. pic.twitter.com/WPl2mpfmkI

The San Francisco 49ers and Los Angeles Rams did not disappoint on Christmas Eve: Their game looked to be all but unwatchable and yeah, it was completely unwatchable. Outside of a few drives led by Good Colin Kaepernick (28-of-38 for 266 yards, two passing TDs, one rushing TD and an INT), this game was utterly unnecessary and completely forgettable.

Yes, I know, the 49ers had a late fourth-quarter comeback to win after two quarters of scoreless play by both sides, but that just means they ended the game one point less bad than the Rams.

The New Orleans Saints have no shot at making the playoffs, but that doesn’t mean they’re going to let a division rival waltz into the Superdome and waltz out with a win. New Orleans continues to be a really tough place to get a win, and the Bucs are now out of Wild Card position.

But another team’s unbeatable home-field advantage was broken through: The Seattle Seahawks not only got housed 34-31 by the eliminated Arizona Cardinals, they dropped out of first-round bye position. Instead of starting the playoffs in the second round in a stadium where they’re undefeated on the year, they’ll be hosting a first-round game in front of fans who just saw them take a pratfall.

In the late-afternoon slot, the Baltimore Ravens and Pittsburgh Steelers added another all-time classic matchup to a rivalry that has to be considered the league’s best. Though Pittsburgh jumped out to an early lead, the Ravens slowly took control of the game and held it deep into the fourth quarter.

The catch that saved Christmas. https://t.co/SvEG9CtuP3

Then, three lead changes in the last eight minutes ended up with the Steelers reveling in another AFC North title — and the Ravens completely eliminated from the playoffs.

In the late game, the Kanas City Chiefs proved to the world just how good they can be — and proved the Denver Broncos aren’t as good as they were last year in any phase of the game.

But the greatest holiday present any of us received is Chiefs nose tackle Dontari Poe entering the NFL record books as the fattest fat guy ever to throw a fat guy touchdown:

They say Santa Claus isn't real.
But here's a fat guy wearing red delivering a present through the air on Christmashttps://t.co/BjVhmFWMyH

The football gods have blessed us, everyone!