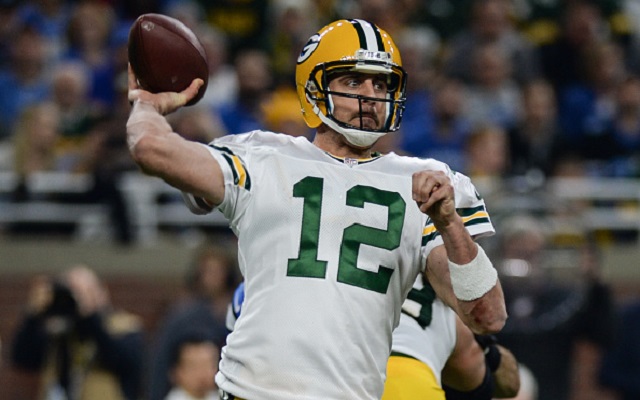 And just like that, it’s over. The 2016 NFL regular season flared out in one blazing burst of action in Week 17. The last few pretenders fell away, and the contenders battled for bragging rights and pole position. Some of the eliminated teams gave their fans something to cheer about over the offseason, while others seemed to be getting an early start on their long spring and summer of golf.

In Cincinnati, head coach Marvin Lewis made an on-field statement to go with his released one: He isn’t going anywhere yet, and his Bengals still have enough talent to beat quality AFC North competition. The Baltimore Ravens, who came into Week 16 with a great chance to win the division, exited Week 17 with a meaningless 27-10 loss.

One of the most talented players in the game, Indianapolis Colts quarterback Andrew Luck, showed how much he loves this stuff with his schoolyard celebration of a meaningless game-winning, come-from-behind touchdown against the Jacksonville Jaguars:

In another game played only for AFC South pride (of which, you know, there isn’t a lot), the Tennessee Titans proved a point by jumping out to a big lead against the Houston Texans and hanging on, 24-17. But when new Texans starter Tom Savage left the game with a concussion, former starter Brock Osweiler proved a point, too: He led a comeback that fell just short, and seemed to rally his team behind him as they head into the playoffs.

Any talk of the Dolphins repeating their seed-spoiling feat of 2015 was quickly squashed by Tom Brady and company, who left no doubt they’re the AFC’s No. 1 team with a 35-14 win. The Minnesota Vikings pasted the Chicago Bears, too, leaving no doubt that the Vikings are still good (and the Bears still aren’t).

New York Jets quarterback Ryan Fitzpatrick got a (teeny tiny) measure of revenge against the Buffalo Bills, who last year ended Fitzpatrick’s dream season with a three-interception nightmare. Fitzpatrick completed 20 of 30 passes for 210 yards, two scores — and no interceptions. Of course, he’s probably never going to start another NFL game, but still.

Cowboys backup quarterback Tony Romo (that still feels weird to type) finally got on the field for one drive against the Philadelphia Eagles, and it was just long enough to do this:

How would you name @tonyromo's first TD of the season?

No more talk about “rust,” then — and no talk about how the Cowboys will be doomed in the playoffs if rookie Dak Prescott can’t go the distance.

Oh, and the Eagles won or something, I don’t know.

In Pittsburgh, we almost had the upset of the season: The Cleveland Browns, coming off their only win of the season, jumped out to a 14-0 lead against the Steelers’ JV team (seriously, backups started at every Steelers skill position). A legitimate second-half back-and-forth, highlighted by a costly goal-line fumble that turned a Browns pick-six into a Steelers touchback, resulted in an unlikely — and thoroughly unwanted — overtime period.

But even though Robert Griffin III led the Browns on a 17-play drive that got as close as 1st-and-goal on the two-yard-line, the Browns somehow had to settle for a 34-yard field goal. That opened the door for Landry Jones and company, who promptly drove for the game-winning touchdown. The Browns couldn’t manage to end their season on a two-game win streak, but did manage to secure the No. 1 overall pick in this spring’s rookie draft.

The Arizona Cardinals took out their frustrations on the Los Angeles Rams, 44-6, and the Denver Broncos took out theirs first on Raiders backup quarterback Matt McGloin, then his injury replacement Connor Cook. Broncos head coach Gary Kubiak had reportedly decided to make this his last game as a head coach due to health reasons. His players made it count, robbing the Raiders of the AFC’s No. 2 seed.

That seeding was instead clinched by Kansas City, as the Chiefs went out and beat the Chargers 37-27. Though the Chargers made it interesting for their fans in what might be the last NFL game in San Diego, the Chiefs were too much to handle.

Devonta Freeman takes it 7️⃣5️⃣ yards to the

What was supposed to be a shootout in New Orleans turned into a blowout, as the Atlanta Falcons raced to claim the NFC’s No. 2 seed for themselves. But a 35-13 halftime lead slowly disappeared in the fourth quarter as the Saints did that thing they do. Drew Brees hung a 19-point fourth quarter on the Falcons defense, and broke 5,000 yards passing for the fourth year in a row — but none of it was quite enough to stop the Falcons from claiming a 38-32 road win and a first-round bye.

The Seattle Seahawks used to have a lock on that position themselves — but going 3-3 over the season’s last six games ruined everything, and their 25-23 escape from miserable San Francisco didn’t do much to restore the fear factor that used to come with going to Seattle in the playoffs.

And Kirk throws a pick.

In the day’s second-most significant action, Washington hosted the New York Giants in what amounted to a win-and-in game for them. Yet the Giants, with nothing to play for, still proved too much for Kirk Cousins and company to overcome. He mixed two fate-sealing picks in with some really good throws and drives, leaving Washington the outside looking in — and obligated to pay a whole bunch of money to a quarterback who just proved he isn’t quite good enough to beat the best.

This turned the Sunday Night Football game from a Thunderdome situation — two teams enter, one team leaves — into a battle for seeding and hosting rights between two playoff teams.
The Packers, who were four-point favorites, came in and did what most expected them to—even if it wasn’t until the second half.

Up until halftime, it was a conservative affair, with rumbling power backs Aaron Ripowski and Zach Zenner controlling the tempo for the Packers and Lions, respectively. A scoreless first quarter set the table for a 14-10 Lions lead… but then, you know, Rodgers.

He finished the day with 27 completions on 39 attempts, for exactly 300 yards and four touchdowns. Matthew Stafford went 26-of-41 for 347 and two, but a game-sealing end-zone interception with 1:30 left on the clock killed any hope of Stafford extending his own NFL record for fourth-quarter comebacks in a season.

In the end, Rodgers made as strong a late-season MVP push as anyone could: The week before Thanksgiving, with his team at 4-6, he said his team “could run the table,” and then he went out and made sure they did.