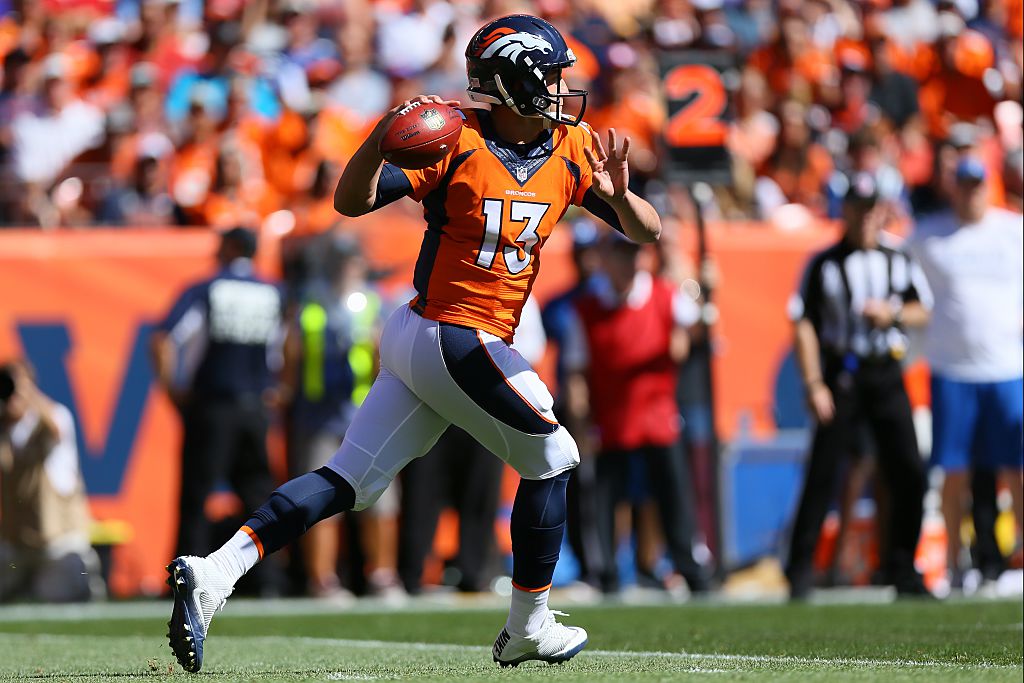 All the analysis, previews, breakdowns and smack talk boil down to a simple hierarchy: If any two given teams played, who’d win? That’s what power rankings are all about, and I’m going to spend the rest of the year at The Comeback slotting all 32 teams exactly where they belong.

32. Chicago Bears
Coming into the season, one could make a rational argument that the Bears could be right on the Packers’ heels well into December. With a decimated defense, hobbled skill-position talent and Brian Hoyer under center, it’s hard to see where their next win comes from.

31. Cleveland Browns
It was the tale of two Codies: Cody Kessler, notorious third-round draft reach, and Cody Parkey, newly signed free agent kicker. Unexpectedly, Kessler quarterbacked the Browns well enough to beat the Miami Dolphins in Miami, but Parkey missed three field goals. Even on their third-string quarterback, there’s a spark of something here, but until they start actually beating people I can’t put the Browns any higher.

30. Jacksonville Jaguars
After high expectations and a valiant Week 1 defeat, the Jaguars look completely defeated. This is a 10-win roster on its way to a three- or four-win season; Gus Bradley has to be feeling serious heat.

29. Miami Dolphins
The unit that’s kept them afloat, the defense, would have allowed 30 points to the Browns if it weren’t for Parkey. Yes, they clawed out a totally undeserved win, but the scope of Adam Gase’s rebuilding project seems to grow with every single game.

28. San Francisco 49ers
What to make of the NFC West? The 49ers blew out the Los Angeles Rams in spectacular fashion, the Rams beat the Seattle Seahawks in a black-eyed cage match and the Seahawks handled the 49ers. I still say this is a talented defense, but the boom-or-bust offense is doing them no favors.

27. Tennessee Titans
Another round of applause for Dick LeBeau, who’s making knockoff designer handbags out of butcher paper and twine, but what offensive talent this team has is being criminally misused.

is Devonta Freeman that ridiculous, or is the Saints defense that bad? Three of these moves are 🔥🔥pic.twitter.com/vpFw16hd3k

26. New Orleans Saints
I spent two weeks thinking this Saints team is good, but highly variable. After getting outclassed by the Falcons, I think they might be bad and highly variable.

25. Baltimore Ravens
This is the ugliest, least inspiring 3-0 start I’ve ever seen. I had to fight myself not to drop them after edging the Jaguars 19-17.

24. Detroit Lions
Technically, the Lions lost by seven. Actually, their first-half pass coverage was so completely discombobulated, so woefully out-of-position, so utterly rent by Rodgers that it almost looked like sabotage. Until the linebackers who actually know the defense get healthy — or until defensive coordinator Teryl Austin stops pulling a Costanza, whichever comes first — this playoff-worthy offense is anchored in the bottom half of the rankings.

23. San Diego Chargers
Okay, so we’ve established who the Chargers are: A team that can score a lot of points and lose to just about anybody except the Jaguars. But they’ve played the Jaguars, so…

21. Los Angeles Rams
They aren’t just above the Seahawks because they beat the Seahawks; the Rams have now beaten a potential rival for an NFC Wild Card spot. That’s huge.

19. Oakland Raiders
Turns out the Raiders can win a game that isn’t a shootout. Or, was their 17-10 win over the Titans just a shootout at half-speed? *pondering emoji*

18. Tampa Bay Buccaneers
This is the last week I keep the Buccaneers up here on scholarship. A great Week 1 win matched my expectations and running into a Week 2 buzzsaw felt like a fluke result. There’s no excuse for losing to the Rams at home, though, and I can’t keep penciling them in as a playoff contender if they’re not playing like it.

17. Buffalo Bills
There was a hint of vintage wagon-circling as the Bills won a must-win game against the Cardinals. Shady McCoy looked like a star reborn with his position coach Anthony Lynn installed as offensive coordinator. I expect the Bills to be better than the first two weeks going forward, but I can’t believe this is the new normal.

16. Houston Texans
I mean, that was an embarrassment. That was a complete, prime-time, circle-game collapse against a great football team’s JV squad. The loss of J.J. Watt hurts them, of course, but there’s more than enough talent here for this team to keep winning as often as they lose.

15. Dallas Cowboys
Two extremely close games against two questionably strong opponents left me struggling to evaluate this Cowboys squad. A thorough dismantling of the miserable Bears isn’t enough to put them any higher than this, but it’s a great sign this team is picking up steam.

14. New York Giants
There’s only so long a team can dance on a razor’s edge; in an awesome back-and-forth against Washington, they finally lost. The Giants are going to play a lot of exciting games this year, which is very much in the vein of the old apocryphally Chinese curse, “may you live in interesting times.”

All 6 of Ryan Fitzpatrick's interceptions. You probably had a better Sunday from your couch
pic.twitter.com/WdoybMtW8Y

13. New York Jets
Ryan Fitzpatrick’s “Tin Cup” moment doesn’t change the fact that this is a talented team that’s going to win a lot of games. Can’t in good conscience rank them Top 10 right now, though.

12. Washington
Okay, they won. It was ugly and great and wild and bonkers but they eked out a divisional win. With or without Josh Doctson, this team is in position to be 3-2 when they host the Eagles in Week 6; that’s when the real test comes.

11. Atlanta Falcons
All preseason long, 2016 Matt Ryan looked like 2015 Matt Ryan. It was the same story in the opener, too — but in the last two weeks, Ryan’s completed 71.9 percent of his passes for five touchdowns, one pick, a 122.9 passer rating and a whopping 9.94 average yards per attempt. If he keeps playing like this, the Falcons are going to give the Carolina Panthers a serious run for their money.

Jets cough up the

10. Kansas City Chiefs
THERE’s that defense. Nothing like a down-on-his-luck riverboat gambler playing quarterback for the other team to get a defense feeling its oats. If they play anywhere near as well against the Pittsburgh Steelers, the Chiefs’ disappointingly slow start will have them 3-1 (and 2-0 in the division) going into their Week 5 bye.

9. Cincinnati Bengals
If Trevor Siemian is making all his layups AND all his three-balls, the Denver Broncos are impossible to stop. No shame in the Bengals’ 29-17 loss.

8. Green Bay Packers
And for the umpteenth time in the last few years, Mike McCarthy and Aaron Rodgers answer all the questions about the offense by beating the Lions. There’s only so long that’ll work — but for right now, few teams would feel good about their chances against the Packers.

7. Carolina Panthers
Increasingly loud questions about the Panthers defense didn’t really turn out to be the problem against Minnesota — except, of course, that what the Vikings did to Cam Newton is what the Panthers usually do to other teams. They’ll still win a lot of games, but these are two teams that could meet in January and one’s way ahead of the other.

6. Pittsburgh Steelers
It can’t get more ugly than the Steelers’ near-shutout loss to the Eagles, but this is a preseason title contender who rolled through the first two weeks and are getting back their All-Pro tailback this week. Six is as low as I can drop them.

5. Philadelphia Eagles
Contrariwise, five is as high as I feel comfortable putting the Eagles right now. Yes, they’re No. 2 in scoring offense and No. 1 in scoring defense, but a lot of that has to do with playing the two worst teams in the league in their first three weeks. After their bye this weekend, they’ll play four road games (including all three divisional road games!), plus the Vikings, in their next run of five. THAT will tell us truly about this team.

4. Arizona Cardinals
Like the Buccaneers, this is the last week the Cardinals are on scholarship. They’re loaded, but they’re going to have to play like a Super Bowl favorite more often than once in four weeks if they’re going to stay up here.

3. Minnesota Vikings
What can you say about this defense? They held a team averaging 33 points a game to just 10 — and none after the first quarter. The offense is more than talented enough to win games against good teams by big margins, even without Adrian Peterson.

2. Denver Broncos
All Siemian needed to do was get above an 80 passer efficiency rating or so for this team to get back to double-digit wins. Right now he’s at 95.9, 11th-best in the NFL, and the Broncos are steaming towards a No. 1 seed…

1. New England Patriots
… or maybe No. 2, because holy cow these Patriots. Even if the smoke-and-mirrors gameplan for Jacoby Brissett shatters and dissipates against the Bills this weekend, the Pats will still be 3-1 and in the drivers’ seat of the AFC East when they get Tom Brady back. Bill Belichick is off to his best coaching job yet, and they’ve still got key players healing up. Right now, there’s no ceiling on how good this team could be.