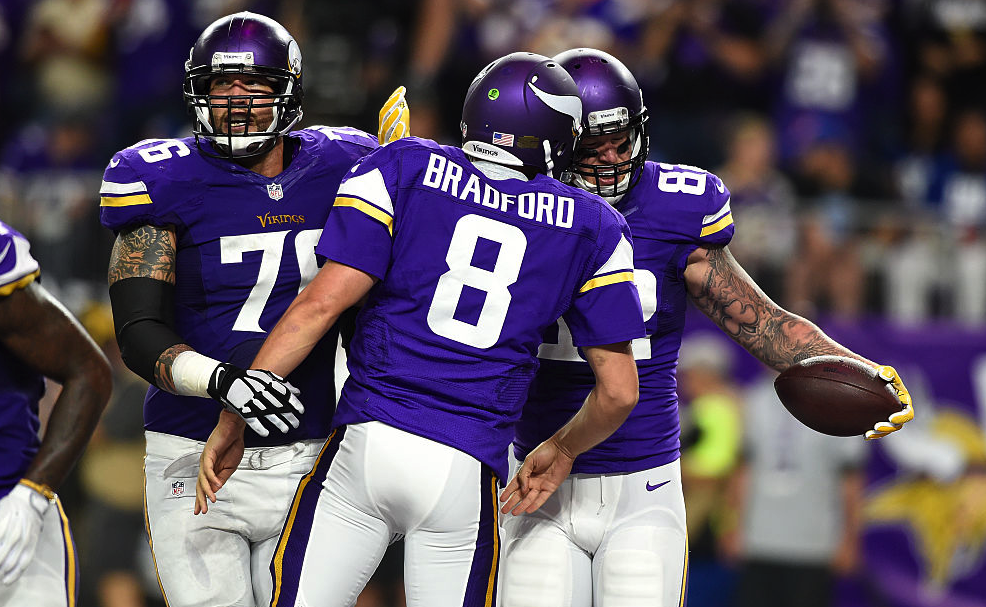 All the analysis, previews, breakdowns and smack talk boil down to a simple hierarchy: If any two given teams played, who’d win? That’s what power rankings are all about, and I’m going to spend this season at The Comeback slotting all 32 teams exactly where they belong.

32. Cleveland Browns
This team keeps being feistier than they should be, and showing signs of serious improvement despite all kinds of adversity. That having been said, they still haven’t beaten anybody—and don’t look likely to start soon.

31. Indianapolis Colts
If the Colts could arrive at the stadium any earlier than the fourth quarter, maybe they’d be a little higher on this list. But A) they can’t, and B) this week’s sudden release of veteran defenders Antonio Cromartie and Sio Moore point to a team in freefall. Getting the division-rival Jacksonville Jaguars off the schneid in London is a terrible look.

30. Detroit Lions
I swear, this team is way too talented to be this low, but the grace period is over.This loaded, high-scoring offense just played a decimated Chicago Bears defense and put up six offensive points.

29. Chicago Bears
They won a game! With Brian Hoyer at quarterback and a cast of backups on defense! And they lost receiver Kevin White in the process! But they won!

28. Tampa Bay Buccaneers
Frankly, the Bucs are lucky I didn’t drop them any lower. But there isn’t much shame in getting whupped by this year’s edition of the Denver Broncos, and they still have more healthy talent on one side of the ball than the Bears have on two.

You know how this ends.
TOUCHDOWN @JAGUARS! #INDvsJAX #Jaguars https://t.co/KfZAU3GohX

26. Jacksonville Jaguars
They won a game! And the defense actually looked really good in spots! And Blake Bortles threw touchdown passes! Now if they could only do it against a team outside of their own miserable division!

25. Tennessee Titans
Is “No. 30, then barely beat the Colts” better than “No. 27, then barely lost to the Texans”? Goodness gracious, the AFC South is terrible.

24. Kansas City Chiefs
I know this is a better-than-bottom-third team, but Andy Reid is just not putting this talent in position to win. Justin Houston would fix a lot of problems, but not nearly all of them.

23. San Francisco 49ers
Once again, this team proves they’re much stronger at home, just not strong enough to beat the awakening Seattle Seahawks. Somehow they have the 15th-best scoring offense despite Blaine Gabbert’s passer efficiency rating flirting with the dreaded Kordoza line at 73.1.

22. San Diego Chargers
Oh, Chargers. What are we going to do with you? Always scoring lots and lots of points, (almost) always losing narrowly. That Saints game was another who-scores-last coin flip, and so…

21. New Orleans Saints
…I’m going to keep these two teams next to each other. Now that the Saints have eliminated all traces of Rob Ryan from the building, it’s like he was never there. They’re fourth in scoring offense and dead last in scoring defense. In Week 1, they lost 35-34. This week, they won 35-34. Saints fans should brace themselves for a lot more of the same — and hope they win as many as they lose.

20. New York Jets
Fitzpatrick’s matchup against one of the best secondaries ever assembled was going to result in a lot of picks, period—but that defense should have done a lot better against the worst offensive line in the NFL. Dropping them until they prove they belong in the upper half.

Steve Smith is living proof that age is just a number…

19. Baltimore Ravens
The Least Impressive 3-0 Team Ever finally loses one — but just barely and to their polar opposite. The release of one-time workhorse Justin Forsett points not to dire problems, as in Indy, but the growth and depth of the position. The offense is warming up, but the defense needs to hold the line if they’re going to keep getting results.

18. Washington
No cookies are awarded for beating the Browns, but avoiding total humiliation and erasing their 0-2 start means something.

17. New York Giants
The Vikings defense has the look of a legendary unit right now, but that offense is too talented to keep hanging their defense out to dry. Ben McAdoo has to fix this.

"The #Rams are the most disrespected, underrated 3-1 team in the NFL." pic.twitter.com/KECtHNq2rl

16. Los Angeles Rams
I still don’t really believe this team has the offensive talent to get the Rams above .500 for the first time since 2003, but a quarter of the way into the season they’re leading the NFC West. There will be some regression at some point, but I can’t justifiably drop them any lower than the midpoint.

15. Arizona Cardinals
The Cardinals still rank in the top half of the league in scoring offense (15th) and defense (11th), but right now this is a 1-3 team with no quarterback. When Carson Palmer comes back healthy and Robert Nkemdiche figures out the defense, they’ll be better than this—but until then, they’ll keep dropping.

Ezekiel Elliott is going to be a legend for the Cowboys… #FeedZeke pic.twitter.com/A8PPZvgfg3

13. Dallas Cowboys
Ezekiel Elliott is finally earning that draft status, taking pressure off Dak Prescott and keeping the ball out of opponents’ hands. A one-score victory over the 49ers isn’t a signature win, but it’s the kind of Ws this team has to grind out if they’re going to have any chance at the division title.

12. Oakland Raiders
We’ve seen them win two shootouts and a slugfest, and their one loss so far—a single-score deficit to the Atlanta Falcons—looks a lot better now than when it happened. A lot of people pegged the Raiders to take big steps forward this year, and they’re hitting their stride.

11. Buffalo Bills
It’s hard to imagine a more emphatic statement than the Bills just made: A 16-0 dismantling of the New England Patriots, in Gillette Stadium, getting them back to .500 after a disastrous start. That said, they’ve still got a lot of work to do before I put them up with the cream of the AFC.

10. Carolina Panthers
This team is maddening. We know they have the firepower to hang a 50-burger on somebody, but the 28th-ranked scoring defense is making life miserable for Cam Newton and company. There’s no way this 1-3 team is going to finish 4-12, but right now it’s hard to see even the reigning league MVP leading this squad back to the playoffs.

9. Seattle Seahawks
Uh-oh. A road game against the wound-licking Jets looked like a perfect trap game for a Seahawks offense that’s been doing more running away than rushing for yardage. Instead, they pick up an emphatic win—and serious momentum.

8. Green Bay Packers
The way-too-early bye seems to have come at the perfect time for the Packers, who can hit the reset button after a disappointing start. They’ve risen through the ranks thanks to a convincing win over the Lions at home, and some time off for us to appreciate it.

7. Cincinnati Bengals
The Bengals present a rankings problem opposite from the Cards: I want to ding them for not being as impressive as I expected, but everyone is losing to Denver and I can’t very well drop them after beating up the Dolphins on primetime. This team should be playing better, but the results aren’t bad enough for me to drop them any lower.

6. Atlanta Falcons
What can you say? After an ominous preseason and unimpressive Week 1, the Falcons have been as hot as anybody. Nothing is slowing down the Julio Jones and the Falcons passing game—or the Falcons run game, for that matter. As long as the defense is playing with a lead, this team will be a very tough out.

5. Philadelphia Eagles
The spectacular win over the Pittsburgh Steelers was our first real “yes, the Eagles are for real” moment; to put them any higher requires more than one such display. Beating the Lions this weekend probably won’t do it, unless they beat the Lions by 40.

4. New England Patriots
Last week in this space, I anticipated a letdown from Jacoby Brissett — and, therefore, a Bills win. The problem is that it looked like there were 22 Jacoby Brissetts out there. Tom Brady coming back will cure a lot of the brief ill effects of the offense, but that defense can’t no-show like that against division opponents, no matter who’s under center.

Bradford to Rudolph.
Too Easy.
Another six for the @Vikings.#NYGvsMINhttps://t.co/GvT4yNf7Xz

3. Minnesota Vikings
An absolutely tremendous, potentially historic defense is making it easy for Sam Bradford and the cobbled-together offense. There’s no sign that’s going to stop any time soon.

2. Denver Broncos
An essentially flawless first quarter of the season would have given them the No. 1 spot, but the injury to Trevor Siemian trips them up. I know he played well in relief, but I can’t call a team giving a rookie quarterback his first start the toughest out in football.