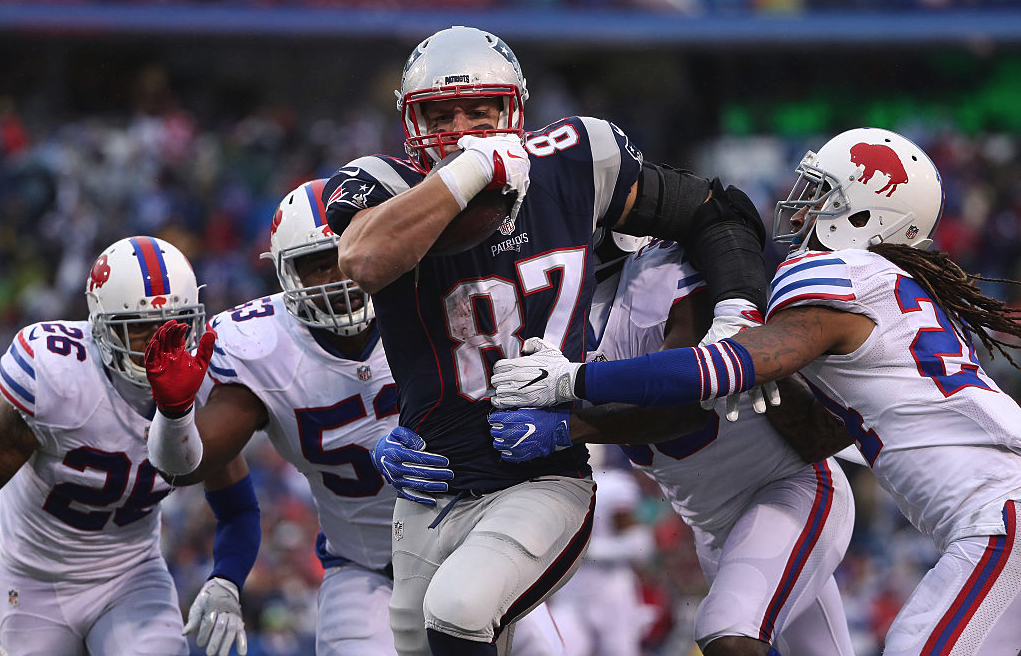 Who’s better than who in the NFL? That’s what fans really want to know. Halfway through the 2016 season, that seems a bit clearer. Yet questions remain. Which teams are Super Bowl contenders and playoff hopefuls, and which ones might fade after hot starts?

32. Cleveland Browns
So close… and yet so far. They made the Jets work for it, but didn’t get that all-important W. The return of Josh McCown definitely made an impact on the offensive side of the ball. Maybe the addition of Jamie Collins will put them over the hump? Until then, 32nd.

31. Jacksonville Jaguars
The Jaguars lost so badly to the deeply mediocre Tennessee Titans that I almost considered dropping them to dead last. This is a team with the talent to win more games than they lose in almost any division — and they’re clearly the worst team in a historically bad division.

30. San Francisco 49ers
Six-team bye weeks wreak havoc on us poor power-rankers. I don’t believe you have to leave teams wherever they were ranked just because they didn’t play, but I struggle to justify moving a bad team up multiple slots just because they haven’t freshly reminded us how bad they are.

When @QuincyEnunwa smells the end zone, nothing can stop him.

29. New York Jets
Brutal. The Browns nearly ended any pretense the Jets had at maintaining a respectable season…

… then again, keeping up appearances the rest of the way might even be worse.

28. Indianapolis Colts
The Colts still have a top-10 scoring offense (26.0 points per game, 29th), but 28th-ranked scoring defense (28.8 ppg). They’ve been alternating wins and losses since an 0-2 start, but it’s hard to see the pattern holding when they play Green Bay in Lambeau Field this week.

27. Miami Dolphins
Another bye-week enigma, the Dolphins are on a two-win streak. Their next five opponents are the Jets, Chargers, Los Angeles Rams, 49ers and Baltimore Ravens. They could easily win take three or four from those five, and would certainly be rocketing up these rankings if it happened. Until then… no.

25. Chicago Bears
Huzzah! A mighty MNF upset of the Minnesota Vikings means… not much, probably, unless it’s followed up with a few more strong performances. We knew the Bears had talent on both lines, but Smokin’ Jay Cutler was hardly on fire and Jordan Howard isn’t going to rip off 202 yards from scrimmage every week.

24. Baltimore Ravens
Another bye-week team, which gives me a chance to remember that they just lost to… the Jets. And four other teams before that. And fired their offensive coordinator somewhere in there, and their offense hasn’t been any better since. If they don’t give the limping Pittsburgh Steelers a very good game, this team is taking a serious power-rank nosedive.

23. Tampa Bay Buccaneers
On one hand, the Bucs took one of the league’s hottest teams into overtime. On the other, they played a home game against a team that set the NFL single-game record for accepted penalties and couldn’t win in regulation.

22. Pittsburgh Steelers
After a terrible performance with a subpar backup quarterback against the league’s best team, the Steelers took a bye week off in hopes we’d overlook it and ranking them higher here. I feel like marking this team “incomplete” until we see more from Landry Jones in better circumstances.

21. Carolina Panthers
There’s the Carolina Panthers defense we’ve been waiting all season for! It’s too bad it seems more like the failings of Carson Palmer making the Cardinals ineffective than the Panthers’ young defensive backs figuring it out.

20. Tennessee Titans
I’d love to give the Titans more credit for so thoroughly dismantling a divisional rival in prime time, but Thursday Night Football still feels more like an afterthought than a showcase, and great googily moogily are the Jags horrible at football right now.

19. Detroit Lions
After eeking out a dramatic Week 1 win over the Colts, the Lions have now lost road games to the Packers, Bears and Texans. Matthew Stafford is the league’s fourth-highest rated passer at 103.4, but the Lions’ decimated back seven is allowing opposing quarterbacks to post an average rating of 113.7.

18. Houston Texans
Yes, the Texans’ vaguely undeserved win over the Lions gives them the slightest of edges here. The two teams are basically Bizarro World versions of each other.

17. Cincinnati Bengals
Uggggggggggh. The best thing about having a matchup as interesting (and telling) as Cincinnati-Washington in London was that we wouldn’t have to wait long to figure out which of these teams is actually good.

Since they tied, now we’ll have to wait at least another week…

16. New York Giants
Nothing’s changed since we last saw the Giants: Their No. 10 scoring defense is playing just well enough to let OBJ beat teams singlehandedly (or not) as best he can. That’s not a formula for season-long success, especially in a division as loaded as the NFC East.

15. New Orleans Saints
All the signs may have been pointing toward a New Orleans upset of the Seattle Seahawks, but you have to give the Saints every grain of credit they earned by actually going out and doing the damn thing.

14. Washington
See: Bengals, Cincinnati. Of course, Washington has won more games so far this year, but they’ve overachieved in that arena almost as much as Cincinnati’s underachieved. Neither of these teams appears ready to make a serious playoff run.

13. Arizona Cardinals
I mean, I should probably rate them lower just based on the increasingly worrying play of Carson Palmer. But we’re already near the mathematical middle of the pack — and we know this team has way too much talent to power-rank more people ahead of them than behind them.

12. Seattle Seahawks
There was the marathon crucible tie in Week 8. There was the disappointing road upset in Week 9. There’s the injury sapping quarterback Russell Wilson of nearly all his improvisational magic. There’s the reality that this team is always aces in November and December. But is 12 a little too high, even despite all that?

Nah. Once some of the bumps and bruises heal, they’ll be one of the best teams in the league. But if you’re an NFL team who’s spent the last five years trying to get a W off the ‘Hawks, now’s the time.

11. Buffalo Bills
Well, for about a quarter and a half it looked like the Bills *might* be able to eke out a win, or at least a respectable loss, against the — ah ha ha ha ha ha nope.

Just before the second half, Bills kicker Dan Carpenter hit the upright and missed. On the answering drive, Patriots kicker hit the upright and it went in. It felt like far more than a decisive six-point swing just seconds before halftime. It felt like the Football Gods swooping down over the Ralph and pronouncing, “Here is why the Bills are the Bills and the Patriots are the Patriots.”

10. San Diego Chargers
The Chargers were never going to beat the Broncos twice in three weeks, but they came awfully, awfully close. Oh, and for the record: There’s nothing wrong with Philip Rivers throwing it four times from two yards out.

9. Kansas City Chiefs
Just as they proved they’re actually for real, they lost their quarterback and another running back. Fortunately for them, they’re hosting the Jags this week — whom they should beat with or without their injured stars.

8. Green Bay Packers
I still don’t think Aaron Rodgers, Mike McCarthy and the Green Bay Packers are all the way back to normal. But they threw for an awful lot of yards and touchdowns, and very nearly beat one of the NFC’s best teams in the process, so I guess I’ll have to leave them up here.

.@stefondiggs with the 25-yard TD grab to give the #Vikings 6. https://t.co/aX7zLFykRV

7. Minnesota Vikings
Once is a fluke, twice is a trend and three times is a habit. If the Vikings drop their third in a row after starting 5-0, it will officially be time to panic in Minnesota. Fortunately, the Lions pass defense cures whatever ails an ailing offense, so the panic button will probably go un-pushed.

6. Oakland Raiders
Okay, I don’t know if I believe that the Raiders are going to finish the season 12-4, but they’re one of the league’s best stories and funnest teams to watch. It would be the best thing ever if they pulled a Major League and made a wildly inconvenient run to a title while the owner’s trying to move the team.

Welcome to the No Fly Zone.

4. Denver Broncos
Before Trevor Siemian went out in Week 4 with a concussion, his passer rating was 99.6. Since he returned against the Chargers in Week 6, he’s posted a 75.9 mark. That’s good enough for the Broncos to beat good teams like the Chargers sometimes, but not always. Their fifth-ranked scoring defense keeps them up here, but the offense needs a solution at running back — and more from Siemian than they’ve been getting.

3. Philadelphia Eagles
They toppled the undefeated Minnesota Vikings. They controlled 7/8th of their game against the rampaging Dallas Cowboys and only ceded in overtime. They have the 10th-best scoring offense and fourth-best scoring defense. By any measure, they deserve to be ranked at least this high.

But y’know, they’ve also lost three of their last four, so…

2. Dallas Cowboys
You can’t say enough about the Dallas Cowboys, how they’ve gone all-in on two rookies and at the halfway mark of the season only lost one game by one point. You also would be remiss to not admit rookie quarterback Dak Prescott has shown some cracks in the armor over the past couple weeks. He’s got to find a way to hit returned wideout Dez Bryant deep without derailing the entire offense.

1. New England Patriots
They blew out the only team that had hung a loss on them this past week, and now it’s hard to see the next time they lose.

As good as Brady’s been — he’s been phenomenal, with a passer rating of 133.9 — I actually think this offense hasn’t quite hit its ceiling yet. That, to an extent, is balanced by the fact that the Patriots haven’t yet faced a good defense in good form. That will change after their Week 9 bye, when they play the Seattle Seahawks, but until now they’re an absolutely unquestioned No. 1.