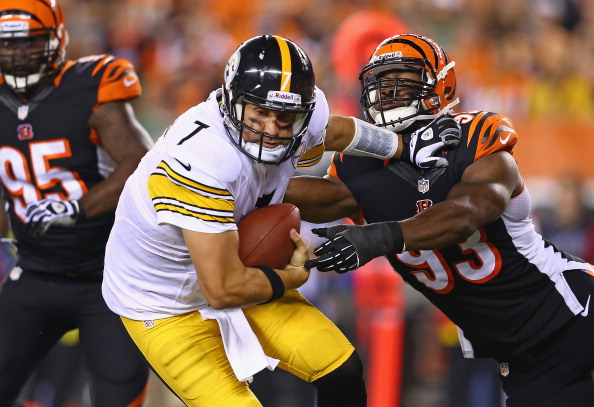 When the Pittsburgh Steelers’ offense stares down the Cincinnati Bengals’ defense in the teams’ Wild Card round playoff contest on Saturday night, expect one thing: Passing, and lots of it.

It’s not just that throwing the football has been the calling card of Pittsburgh’s offense this year—it has, with its 4,603 yards ranking it third in the league. But with running back DeAngelo Williams sidelined with an ankle injury, Fitzgerald Toussaint and Jordan Todman will handle rushing duties. And without Williams (and Le’Veon Bell, who suffered a season-ending knee injury in Week 8), the pressure to advance the football will fall mostly on the shoulders of quarterback Ben Roethlisberger.

In one sense, this is a good thing. Roethlisberger has been here before. Eight of his 12 NFL seasons, including this one, have ended with at least one playoff appearance. He’s been in three Super Bowls, winning two. But the road has been an unkind place for the quarterback this season and, in concert with how well the Bengals’ defense has been performing and Williams’ injury, it could be exactly the wrong time he needs to carry his offense on his back.

Roethlisberger played in just six of the Steelers’ eight regular-season road games this season, with Pittsburgh going 3-3. And Roethlisberger had his hands in all of those outcomes. He’s struggled passing on the road this year, with five touchdowns to nine interceptions (and three of those five scores thrown in Week 17 against the Cleveland Browns). He does have a win in Cincinnati over the Bengals, a 33-20 victory in Week 14, but Roethlisberger had no touchdown passes in the game and he threw one interception.

Cincinnati’s defense has been extra-good at wreaking havoc on opposing quarterbacks this year. While it ranks just 20th in passing yards per game allowed at 249, it is second in passing touchdowns allowed with 18, is tied for ninth in sacks with 42, and third in interceptions with 21. And if the run game goes the way it did in the Wild Card round a year ago, when the Steelers had no Bell, Roethlisberger is going to be forcing throws against an aggressive, ball-hawking defense.

Against the Ravens in the playoffs last year, Roethlisberger completed 33 of his 48 pass attempts for 356 yards, and threw one touchdown to two interceptions, while the run game netted only 68 yards on 19 attempts. The Steelers lost, 30-17, directly as a result of Roethlisberger pushing himself with the lack of a competent run game.

The high number of passing yards are a red herring from that game, and potentially this weekend. Just because Roethlisberger has a high number of yards, or even a stellar completion percentage, that doesn’t mean the Steelers will win. As ESPN Pittsburgh’s David Todd points out, Roethlisberger has thrown for over 275 yards in three of his 15 playoff appearances. All three were losses, including his last two.

And all those weapons at Roethlisberger’s disposal may not be as big a help against the Bengals as they have been against other opponents this year. Wide receiver Antonio Brown is a record-setter and easily the best player at his position presently, but the Bengals are better at containing him than any other defense he’s faced, allowing him just 79.5 yards on average through 11 meetings. Brown had 47 yards and a touchdown against the Bengals in Week 8 this year and 87 yards in Week 14. And while fellow receiver Martavis Bryant is a big-play threat, with 765 yards and six touchdowns this year on just 50 catches, he’s disappeared in the last two weeks, totaling four catches for six yards on six targets.

Bryant has also struggled with drops, leading the Steelers’ with 11, which is tied for fourth at the position according to Pro Football Focus, though he’s tied at 38th among receivers for targets, at 88. This has prompted Roethlisberger to call out Bryant this week (from a place “of love”) to “toughen up,” saying, “You’ve got to get tough and you’ve got to make tough plays and you’ve got to make tough catches and you have to find ways to do everything you can to help this team.”

If the Bengals contain Brown and Bryant again has a bad game, the ways that Roethlisberger can lead Pittsburgh to a victory will shrink considerably.

Given Cincinnati’s pass defense, Roethlisberger’s road performances this year and Williams’ injury, Saturday night’s game could cause the Steelers’ offense to struggle. How much Roethlisberger throws, and to whom—whether a Steelers’ player or a Bengals’ defender—will dictate Pittsburgh’s chances to head to the AFC’s Divisional Playoffs the following weekend.