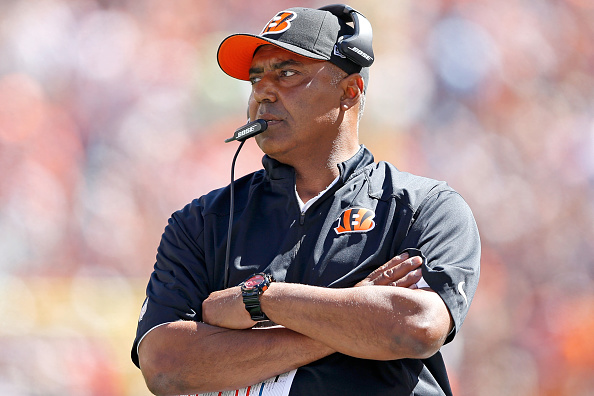 The last time the Steelers traveled to face the Bengals for an NFL playoff game, the city of Cincinnati was awash in excitement. The Bengals were playing in their first postseason game in 15 years, and in Marvin Lewis’ third season as the head coach, the transformation from one of the worst-run pro franchises into a team that had won the AFC North and was thinking about maybe, possibly, going to the Super Bowl was nearing completion.

They had experienced the Lost Decade of the 90s with coaches Dave Shula, Bruce Coslett and Dick LeBeau and had been rewarded with a team that featured Carson Palmer at quarterback, Chad Johnson at receiver, and Rudi Johnson (1,458 rushing yards) at running back. These Bengals were the most tantalizing version of the team to hit the Queen City since Boomer Esiason was slinging and Ickey Woods was dancing.

Then this happened on the Bengals’ second snap from scrimmage.

And in some ways, the city and its football team never recovered. The Bengals lost 31-17 that day and still haven’t won a playoff game in Lewis’ tenure, and if Cincinnati falls (again) to Pittsburgh (again) at Paul Brown Stadium (again) without the services of its starting quarterback (again), it’ll be time for the Bengals to look for Lewis’ replacement. At that point, Lewis’ teams will have had seven chances to advance out of the first round of the playoffs, and they will have failed each and every time.

After Kimo von Oelhoffen destroyed Carson Palmer’s knee in 2005, the Bengals won the AFC North title again in 2009, going 6-0 against their division opponents. The Bengals were a 2.5-point favorite in the wild-card round vs. the Jets, who were led by a rookie quarterback named Mark Sanchez. The Bengals lost that one, too.

There’s little doubt that when Lewis was hired after the 2002 season, he changed the course of the franchise. He’s been the steadying force for owners that oftentimes don’t seem to care about its fans and a group of players that, for a time, were in neverending legal limbo.

When talking about the greatest coaches in team history, Lewis is No. 2 behind Paul Brown. He’s been — and will always be — an asset to the franchise. But if the Bengals lose this Saturday night to the Steelers — if they fall yet again in the first round — the time will come to move the franchise in another direction. Because if Lewis can get the team to the postseason but can’t shove them past even the wild-card round, the Bengals have no hope of ever winning the Super Bowl.

Lewis’ teams haven’t always been great, and he hasn’t always done such a great job with his team’s talent. He didn’t get above the career .500 mark as a head coach until the 2013 season, and his game management, particularly with timeouts called and replay challenges made, oftentimes is a disaster.

In some ways, he reminds me of Hall of Fame baseball manager Bobby Cox, the man who helped the Braves to 15 MLB playoff appearances but only managed to win a single World Series. Cox was a wonderful regular-season manager, massaging the personality of his teams and molding them into the most consistently-good baseball organization since the Mickey Mantle-era Yankees. But when the Braves made the playoffs, the team suffered because Cox usually wasn’t as strong with game management as the opposing manager. He could get the Braves to the base of the mountain, but the rope usually snapped halfway up the ascent.

Lewis is the same way. His locker-room management skills are beyond solid. His players and coaches believe in him, and his longevity as the Bengals coach — after Bill Belichick, he has the longest tenure of any coach in the NFL — is a testament to the success of the culture he’s created.

Lewis doesn’t deserve to lose his job if the Bengals lose to the Steelers — especially since he’ll be playing a backup quarterback in AJ McCarron — but if Cincinnati falls for the fifth-straight time in the wild card round, a change needs to be made.

I’m not advocating firing Lewis, mind you. Instead, I’m saying install Lewis as the general manager or put him in charge of roster management. He knows personnel. He knows how to hold a locker room together. He knows how to get a team to the postseason, where a Super Bowl title is just over the horizon. But Lewis’ path, for some reason, is blocked by an obstacle he hasn’t had success in moving.

Maybe somebody else will have a different idea of how to get around that barrier. Lewis has earned the right to keep his job, but if the Steelers prevail Saturday, it just might be time to give somebody else a chance to take the Bengals beyond the first round.