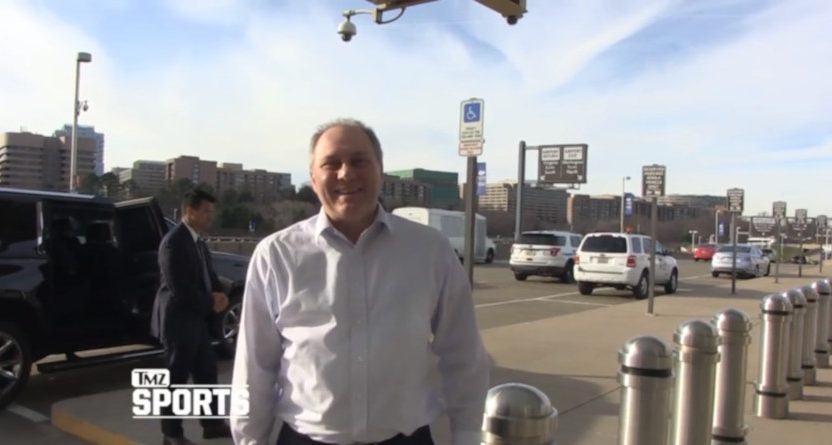 Republican and Democratic Louisiana congressmen apparently can agree on one thing; trying to call the NFL to account over a missed call in the Saints’ NFC championship game loss to the Rams Sunday. To start with, Republican congressman Steve Scalise (pictured above), the representative for Louisiana’s first district and the House minority whip, advocated for a do-over in response to a TMZ reporter’s question, saying “Frankly, they should play a makeup game.”

“We keep getting one step closer. Last year, that was on us, but this year, to have the refs literally blow a no-call that everybody in the country saw except the guy who should have made the call, it stings a lot.” The TMZ reporter later asks “So apparently, I’ve heard that they may actually reverse this call and replay it, do you think that’s something they should consider?” Scalise responds “The NFL’s going to look at rules changes, but clearly, looking at something like those 15-yard penalties, shot to the head, not making the call that everybody knows they should have made, with the technology, there’s ways to solve it, just like there’s other things that they’ve revisited. Frankly, they should play a makeup game. If the Saints played the Rams on Saturday, I think it’d be the highest-watched sports event all year.”

But Scalise isn’t the only Louisiana politician complaining about this. As per Mike DeBonis of The Washington Post, Democratic congressman Cedric Richmond (the House assistant majority whip, whose Twitter bio includes “Representing the 2nd Congressional District of Louisiana and the Who Dat Nation”) is actually talking about calling Roger Goodell in to answer officiating questions:

NEW: @RepRichmond tells me he's spoken to his colleagues on Judiciary antitrust subcommittee about hauling in Roger Goodell and NFL to answer Qs about blown @Saints call.

Of course, DeBonis added that this might not be entirely serious:

ICYMI: Today, I sent a letter to @nflcommish expressing my deep disappointment with the outcome of the NFC Championship game on Sunday. Our @Saints deserved better. pic.twitter.com/NowSLktk8T

Of course, these comments are probably smart politically; Saints’ fans are outraged about this call, and elected officials on both sides of the aisle saying they share that outrage probably won’t be bad for their polling numbers. And it’s also interesting to see just how far that outrage goes; Scalise says he’s upset and “they should” play a makeup game, but isn’t actually putting any pressure towards that (which is good, as that’s not happening) and is largely focusing on discussion about changing the rules so that doesn’t happen again, and Edwards also recognizes that Goodell is “unlikely to change the result of the game,” while Richmond may have mentioned calling Goodell before their committee to discuss the NFL’s procedures here, but doesn’t seem likely to actually do that. So this is all just a bunch of posturing unlikely to actually accomplish much, beyond being something that looks relatively good for these officials with relatively low levels of effort.

But still, it’s a little weird to have all these elected officials weighing in on what the NFL should or shouldn’t do, especially when they have a clear bias based on the team from their area. And it’s funny to think about what would happen if the NFL somehow did make the crazy move of replaying this game; would California’s governor and congressmen then complain in response, and would the NFL then alter its response further? That’s not going to happen, but it’s worth keeping in mind that most politicians’ comments about sports results don’t actually produce anything more than most upset fans’ remarks, and that even more than your standard issue, every sports issue affecting a result between two teams comes with two obvious sides. And whatever conclusion the NFL does eventually come to (or not) about changing its rules to make pass interference reviewable, it probably won’t be as a result of lobbying from governors and congressmen. So this is really a lot of sound and fury, but it’s not signifying much.

1 thought on “No, the NFL isn’t going to replay the NFC title game, despite posturing from Louisiana congressmen from both parties”