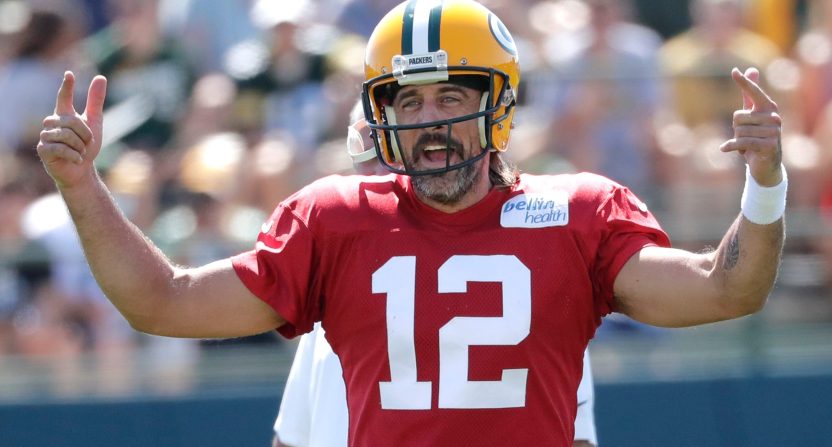 Aaron Rodgers is not afraid of controversy, and he may have welcomed a minor one by wearing a shirt that parodied former president Donald Trump’s controversial MAGA slogan.

No still photography allowed in the locker room and he didn’t talk today, but Aaron Rodgers is wearing a “Rodgers/Lazard ‘23 MAKE GREEN BAY GREAT AGAIN” T-shirt.

Rodgers/Lazard ’23 mirrors a typical election campaign sign and promotes the Aaron Rodgers to Allen Lazard connection on the field. The more controversial aspect of the shirt lies with “MAKE GREEN BAY GREAT AGAIN,” an obvious spoof of Trump’s “Make America Great Again” slogan which became a symbol of far-right extremism after it was latched onto by the MAGA-wing of the Republican Party.

While promoting “MAKE GREEN BAY GREAT AGAIN” may not have been intended as a political statement, the glaring ode to “MAGA” is hard to ignore.

Rodgers recently joined The Joe Rogan Experience where the duo spent time mocking President Joe Biden. And last year, the quarterback was championed by Republicans for his refusal to get vaccinated against COVID-19. Although Rodgers claimed he didn’t want to be part of the politicization of the vaccine, wearing a MAGA parody shirt might not help his cause, as proved by the reactions to Schneidman’s tweet.

Does the back say “Immunized?” https://t.co/It5MwoR9Vv

Aaron Rodgers deserves all the smoke he gets. https://t.co/7VSt7mSuAd

I’m sure this will end well. https://t.co/RRn36GMYwR

Aaron Rodgers setting up the packers up for failure lol https://t.co/evDfxVSXVG