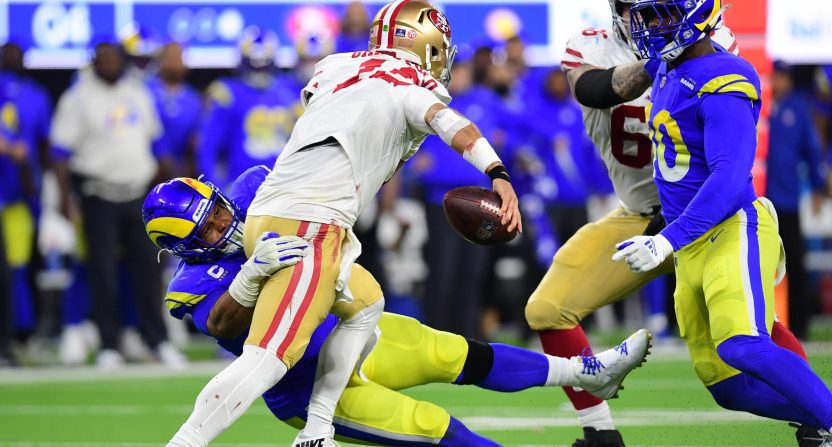 The San Francisco 49ers went on an incredible, improbable run to make the NFC Championship Game, but they’re surely kicking themselves after losing the game 20-17 to the Los Angeles Rams.

The 49ers had a 17-7 lead entering the fourth quarter, but they proceeded to make big mistakes — and blow great opportunities — on both sides of the ball to assist the Rams’ comeback and victory.

San Francisco’s three drives in the fourth quarter featured two punts and a game-sealing interception. And the 49ers’ usually-effective run game wasn’t able to do much of anything — 20 carries for 50 yards and no touchdowns in the game — against Aaron Donald and company, which prevented San Francisco from being able to at least chew clock and move the chains. That also forced quarterback Jimmy Garoppolo to have to try to make more plays, which didn’t go well- especially on the final drive.

"I"m afraid that it's going to have to be Jimmy Garoppolo that gets it done." 😬 – Troy Aikman pic.twitter.com/aUyhfFKtzb

The biggest missed opportunity for the 49ers came when they had a 17-14 lead with just under 10 minutes remaining, and Los Angeles had the ball at its own 15-yard line. Rams quarterback Matthew Stafford gifted an arm punt to San Francisco’s Jaquiski Tartt, and the safety flat-out dropped the ball.

And on the next play, Stafford connected with Odell Beckham Jr. for a 29-yard play, but 15 more yards were added on due to a helmet-to-helmet hit from Jimmie Ward.

Three minutes after the Tartt drop, the Rams tied the game on a Matt Gay field goal.

Tartt tweeted about the dropped interception after the game:

No excuses!! I deserve all the criticism my way! Opportunity I dream of I came up short!!! Let my brothers down!! It Still won't define me as a person/player. Only will get stronger and better… #Believdat

That still gave the 49ers time to tie the game or go 75 yards to win it (they also had one timeout remaining), but the ensuing “drive” was a disaster.

On first down, Garoppolo threw an incomplete pass.

On second down, Garoppolo threw a checkdown pass behind the line of scrimmage to Jauan Jennings that wasn’t at all worth it considering the time remaining and their field position. Even worse, it turned into a three-yard loss.

And on 3rd-and-13, well, yikes. Garoppolo tried to avoid being taken down by Donald for a sack and made a desperate toss that was picked off by Travin Howard for a game-sealing interception.

As called on Rams radio: pic.twitter.com/k7TBm3tVqZ

49ers head coach Kyle Shanahan also made a very questionable decision in the fourth quarter, choosing to punt on 4th-and-2 at the Los Angeles 45-yard line with 10 minutes remaining

Here’s how the football world reacted to the 49ers’ miscues:

Two-play meltdown from Tartt and Ward. Completely changes the game

The three-play sequence that completely turned this game around:

the decision to punt on 4th & 2 when you’re winning in the 4th qtr vs. *this* offense is worse than tartt’s drop. there’s no defending that decision. you have a chance to put a team away and you don’t. both offenses have been rolling this half. read the room. go for it.

People are going to put this loss on Jaquiski Tartt’s drop, but Kyle Shanahan’s decision to punt on 4th-and-2 and Jimmy Garoppolo’s horrendous final two drives had just as much of an impact.

Gonna be a rough night trying to sleep for Jaquiski Tartt.

I truly feel for him.

Jimmy Garoppolo finished 2-of-10 with an Int when pressured.

Garoppolo threw an NFL-high 8 Int when pressured this season, 5 of them since Week 18. pic.twitter.com/u0Qx7HtUlB

And in the end Jimmy finished the game in the most Jimmiest of fashions!! Football always has a way of making sense to me.

I wish I played the game in the NFL so I could comment on that Jimmy G pass.

Jimmy G's final 2 drives as a 49er with the NFC championship on the line:

Jimmy G wanted to leave no doubt that Trey Lance will be the 49ers QB in 2022.

Jimmy Garoppolo made it easy for the 49ers. Trey Lance is the team’s 2022 starting quarterback.