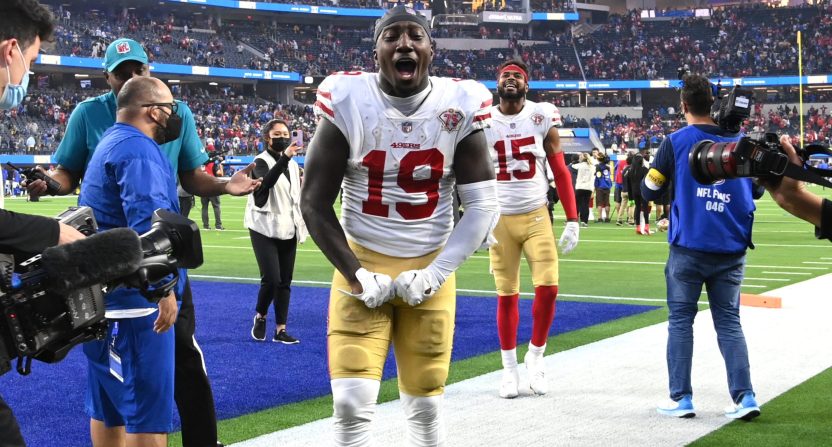 The San Francisco 49ers took down the Los Angeles Rams 27-24 in overtime on Sunday at SoFi Stadium to clinch an NFC Wild-Card spot.

The 49ers needed a win over the Rams or a New Orleans Saints loss vs the Atlanta Falcon- and things looked rough for the 49ers for a while. Los Angeles led San Francisco 17-0, and the Saints were beating up on the Falcons en route to a 30-20 win.

But the 49ers dominated in the second half. Star wide receiver Deebo Samuel — four receptions for 95 yards, eight carries for 45 yards, and even a 24-yard touchdown pass — and a committment to the run game from head coach Kyle Shanahan keyed the second-half comeback for San Francisco.

Deebo! The Niners needed that. 🏈💨 pic.twitter.com/tvkeEtFRc4

10 straight run plays by the 49ers set up this trick-play pass touchdown!

San Francisco has come back to tie it up vs the Rams. pic.twitter.com/1HorTZiAQp

Matthew Stafford and Cooper Kupp connected — as they frequently do — to give the Rams the lead back with 2:29 remaining in regulation.

But the 49ers got a touchdown of their own to tie the game back up and send it to overtime.

Deebo continues making ridiculous plays to keep the 49ers in this. pic.twitter.com/d0JRJIyrxX

The 49ers have tied it! Incredible game. pic.twitter.com/oa7LWBJNYU

In overtime, the 49ers got a go-ahead field goal from Robbie Gould with 2:45 remaining.

And the 49ers locked up the playoff-clinching victory when Ambry Thomas intercepted a deep pass from Stafford.

THE 49ERS ARE IN THE PLAYOFFS! pic.twitter.com/zyA6ITTSDk

Despite the loss, the Rams still clinch the NFC West division title due to the Arizona Cardinals losing at home to the Seattle Seahawks. However, the Rams drop from the No. 2 seed to the No. 3 seed with the loss; the Tampa Bay Buccaneers have the No. 2 seed. The Rams will host the Cardinals in the Wild-Card round.

The 49ers clinch the No. 6 seed and will go on the road to face the Dallas Cowboys.

First round bye: No. 1 @packers #NFLPlayoffs

Here’s a sampling of how the NFL world reacted to 49ers’ incredible comeback win:

The 49ers had the lowest minimum win probability of any team to eventually win a game in the NGS era, including the famous Miami Miracle and Super Bowl LI.#SFvsLAR | #FTTB pic.twitter.com/ZDj66G7B51

The 49ers had just a 0.4% chance of winning after punting with 1:57 remaining in the game.

In order to come back and win, the 49ers had to:

🔸 Force a three-and-out
🔸 Score a TD without any timeouts
🔸 Prevent the Rams from scoring in regulation
🔸 Win in OT#SFvsLAR | #FTTB pic.twitter.com/V0uL0Rxut5

Sean McVay is no longer undefeated when leading at halftime…

He was 45-0 prior to the 49ers' comeback victory 🤯 pic.twitter.com/BSWL7XrR5o

The 49ers are going back to the playoffs. Gotta bring back this classic. pic.twitter.com/0EWTbXo5of

Deebo Samuel has 8 rushing touchdowns this season, the most by any wide receiver in a single season in NFL history. pic.twitter.com/fmR86iuZOa

He is the 8th WR in NFL history with a receiving, rushing and passing touchdown in the same season. pic.twitter.com/kglRtLXCzU

Deebo Samuel takes the handoff and finds Jauan Jennings wide open (6.7 yards of separation) in the end zone for a 24-yard TD pass.

Samuel has aligned in the backfield on 11 snaps today (39%, career-high), scoring a rushing and passing TD on those plays.#SFvsLAR | #FTTB pic.twitter.com/26IJaAfwN3