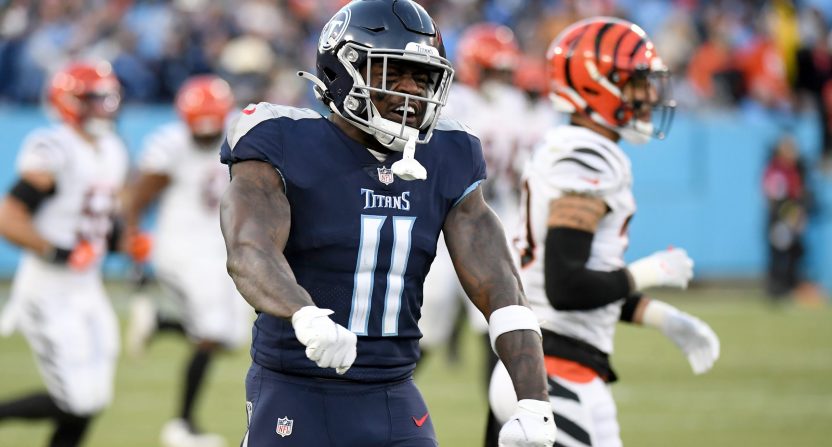 Crazy things are happening on the wide receiver front in the first round of the 2022 NFL Draft on Thursday night. From picks 8-18, six wide receivers were drafted.

Additionally, during those picks, there were two trades involving veteran receivers.

The Baltimore Ravens traded Marquise Brown to the Arizona Cardinals.

And in a stunning blockbuster trade, the Tennessee Titans have sent A.J. Brown to the Philadelphia Eagles in exchange for the No. 18 and No. 101 picks (so much for the Tennessee front office shooting down the Brown trade rumors).

We've traded picks 18 and 101 to the Titans for WR A.J. Brown.@LifeBrand_AI | #FlyEaglesFly pic.twitter.com/BKTNOL5B8u

Not only did the Eagles trade for Brown, but they also immediately signed him to a lucrative contract. Brown has signed a four-year, $100 million extension with the Eagles that features $57 million guaranteed.

Brown is a physical specimen at wide receiver, listed at 6’1″, 226 pounds and looking like a running back with the ball in his hands.

Tannehill takes advantage of the free play and lands a massive pass to A.J. Brown. pic.twitter.com/6ZsD1My6jt

Over three NFL seasons, Brown has 185 receptions, 2,995 receiving yards (16.45 AVG), and 24 touchdown receptions. And he’s still just 24 years old (25 in June). This is a significant addition for the Philadelphia offense, and quarterback Jalen Hurts now has two explosive young weapons to throw to in Brown and DeVonta Smith.

While the Titans got rid of a star wide receiver in this trade, they hope that they drafted a future star in Arkansas wide receiver Treylon Burks. Tennessee used the No. 18 pick acquired from the Eagles to select Burks.

The Brown trade also came after the Eagles traded up to draft Georgia defensive tackle Jordan Davis with the No. 13 pick.

After their big trade, the #Eagles select at No. 13 #Georgia DT Jordan Davis. After bringing Fletcher Cox back for another year, they select a potential replacement. They jump the #Ravens to do it.

Here’s a look at how the football world is reacting to the blockbuster trade:

“THIS IS BIG” @JasonKelce and @AdamLefkoe were LOVING the A.J. Brown Eagles trade 😭

Tap in to B/R Gridiron Draft Night now for live reactions to every pick before everyone else https://t.co/fAH0lWnaoT

Eagles moved up to draft Georgia DT Jordan Davis, completed a blockbuster trade for former Titans’ WR A.J. Brown…and did it without giving up either or their double first-round picks in the 2023 draft.

AJ Brown and Jalen Hurts were working out together just last week. They're now teammates. pic.twitter.com/i0JNoIeWwU

There were other pieces and moves involved, but not a bad trade off in the end for Philly.

AJ Brown and DeVonta Smith…so much fun for my guy Jalen Hurts.

Thats a great trade by the Eagles for Brown. Hill went for a lot more. Hill's a better player but Brown is younger and has one cost controlled year left. Comes off like a salary dump of sorts for the Titans

"A.J. Brown has been traded to the Philadelphia Eagles"

I like this approach a lot for them. Burks can do a lot of the same things Brown can do. #NFLDraft