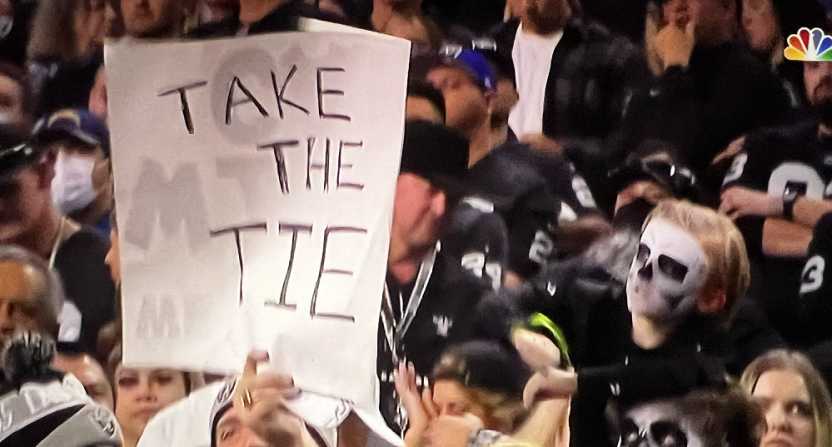 An absolutely crazy NFL scenario played out into the final seconds of Week 18- until the Las Vegas Raiders made a walk-off field goal with no time remaining in overtime.

The Jacksonville Jaguars stunned the Indianapolis Colts 26-11, keeping Indianapolis out of the playoffs. With that result, the Los Angeles Chargers and Las Vegas Raiders could tie on Sunday Night Football… and both teams would reach the playoffs, while the Pittsburgh Steelers (who beat the Baltimore Ravens in overtime 16-13) would be left home.

Cris Collinsworth and Al Michaels on the possibility of a Chargers-Raiders tie. pic.twitter.com/rJevhAC2AO

Well, the incredible Sunday Night Football game went to overtime after the Chargers erased a 29-14 deficit and Justin Herbert threw a buzzer-beating touchdown.

Justin Herbert is ridiculous. This wacky game is going to OT!

And the tie possibility is still in play! pic.twitter.com/wrrLjhzNse

The teams traded field goals to keep the game tied deep into overtime, and the Raiders had 3rd-and-4 at the Chargers 39-yard line when Los Angeles head coach Brandon Staley called a (controversial) timeout.

Raiders weren’t taking a knee here before the timeout. And after the timeout they got under center and ran. They were going to try a field goal no matter what imo pic.twitter.com/xSskq71ztA

After the game, Staley said that the Chargers wanted to get their best run defense in for the play.

Brandon Staley said time out was to get best run defense package into the game. "I don’t think it changed the mindset … We wanted to make sure we got our run defense in. We didn’t execute."

The run defense didn’t work. Josh Jacobs ran 10 yards for a first down, setting up Daniel Carlson for a field goal attempt with two seconds left. Carlson made the 47-yarder, resulting in a 35-32 Raiders win.

Raiders head coach admitted that they were considering playing for a tie:

So, the completely improbable tie scenario was right there to be had, but the Raiders made a field goal for the win as time expired. The Raiders and Steelers are in, and the Chargers are out.

The Raiders as the AFC’s No. 5 seed will play at the No. 4 Cincinnati Bengals on Saturday.

Raiders and Steelers fans are certainly ecstatic, but most NFL fans were rooting for the chaos of a tie.

Here’s a look at how the NFL world reacted as the tie possibility was unfolding, and after the Raiders ruined that with a playoff-clinching victory:

For the ones that want a TIE don’t understand the competitor of players. You in it to win it

I think we had spent so much time talking up the tie (and in that moment hearing about the tie) that by then we, as a football watching society, had convinced ourselves they were Definitely Doing The Tie https://t.co/ghQaC59C3P

Robbed of the best tie of all time

At this point, you have to tie.
You just played for 60 INCREDIBLE, UNBELIEVABLE minutes to prove that you’re not colluding. You did not rig it. You tried your best.
It’s time to tie. Tie, you beautiful bastards. Tie.

Well, I guess the real tie was the friends we made along the way.

Raiders should have let clock run out and settled for tie as payback to Steelers for Immaculate Reception.

Is the tie actually going to happen?!! 😱

THE TIE IS UPON US

One of my best friend’s dad is a huge Steelers fan and was convinced the Chargers and Raiders would collude to tie keep the Steelers out of the playoffs and I laughed a lot when she told me earlier this evening and now I’m like….dangerously close to having a tin hat on

NFL fans every day before today: Games should never be allowed to end in a tie.

NFL fans (outside of Pittsburgh today): If this game ends in a tie it will be the greatest night of sports in history.

if this game ends in a tie my goal is to get a post game interview for @SportsCenter with a Raider and Charger… at the same time.