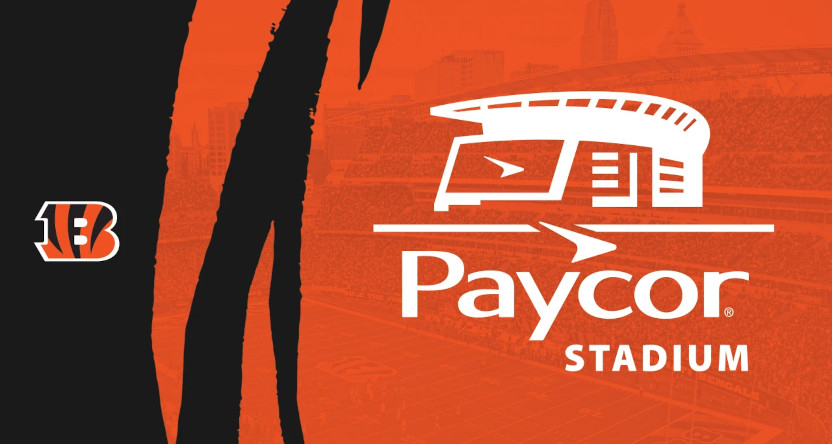 One of the NFL’s few remaining stadiums without a corporate name is no more. The Cincinnati Bengals announced Tuesday that they’ve signed a 16-year deal with locally-based HR and payroll software company Paycor to rename Paul Brown Stadium as Paycor Stadium. That means that only the Chicago Bears‘ Soldier Field and the Green Bay Packers‘ Lambeau Field remain without corporate names. Here’s the announcement from the Bengals on Twitter:

We are excited to announce: The Jungle is now @Paycor_Stadium!

This day in @Bengals history…the first post from Paycor Stadium! Two hometown teams are excited to take Cincinnati to the next level. Can we get a Who Dey!? pic.twitter.com/tAN3KPNlvA

And the Twitter world had plenty of reaction, with many making jokes about the company name:

The only monster here is the human capital management monster that has enslaved your mother! I call him Paycor, and it's time to snatch your mother from his neon claws!https://t.co/iu2gplFS9x

Paycor sounds like the name of a villain's business in a sci-fi movie https://t.co/6k5t8L4hJi

Paycor’s primary product is payroll software and is now associated with a team that hates paying their players. https://t.co/UGeLmyKnVK

Paycor sounds like the final boss of a Monopoly RPG

The stadium had been named Paul Brown Stadium since its 2000 opening, after famed coach and executive Paul Brown, who co-founded and was the first coach and general manager of the Bengals when they joined the American Football League as an expansion team in 1968. Current owner Mike Brown is Paul’s son. Paul Brown passed away in 1991 at 82. In the team statement on the move, Mike Brown said he thought his father would be fine with this move, as it will give the Bengals more money to compete:

“This is a move that I think my father would have agreed to. He was always for what is best for the football team,” said Bengals President Mike Brown. “This partnership allows the Bengals to continue to compete at the highest level in the NFL and exemplifies our long-term commitment to the community.”

As Kelsey Conway and Sharon Coolidge noted in a Cincinnati Enquirer piece on this, local revenue (including stadium naming rights) is becoming more and more important for teams. It’s not shared with the rest of the league (unlike national media rights, which are fully shared, or gameday revenues such as tickets and concessions, which are partly shared). A deal like this (which also includes gate-naming deals from Betfred and Altafiber) increases the local revenue for the Bengals, who Sportico’s Eben Novy-Williams listed as the least-valuable and lowest-revenue team in the NFL.

And boosted local revenues help with cash flow, particularly when it comes to signing players to big guaranteed contracts (where the guaranteed money has to be set aside in an escrow account). The Bengals have several key players potentially set for those in the next few years, including Joe Burrow, Ja’Marr Chase, and Tee Higgins. So this fits with the past comments Conway and Coolidge cite from Brown on that front:

“We’re a small-market team,” Brown said at the Bengals’ annual media luncheon in late July. “We need the revenue streams that we can obtain. The fact that about 30 teams have naming rights and a revenue stream from that and they have more revenue than we do to begin with. We have to do some things just to keep up.”

…“I can tell you that we couldn’t be happier with Joe Burrow,” Brown said. “He’s everything you would wish for, especially for a quarterback in Cincinnati. Our whole focus is going to be on keeping him here.”

So, unsurprisingly, a lot of the Twitter reaction to this change hit on the Bengals’ plans for Burrow, and also possibly Chase and Higgins:

Paycor exists because the Bengals are prepping to PayJoe. https://t.co/qPvpHAcyPQ

As long as Paycor will Pay-for Burrow, I’m down.

Like how we went with Paycor since we are going to Pay Joe, Ja’Marr, and Tee

The stadium naming deal still needs two levels of approval: stadium-size signage approval from the Cincinnati zoning board (set for a meeting on Aug. 24) and sign-off from Hamilton County commissioners, as the county owns the stadium. But both of those appear likely to happen at this point, and the team plans to even have some Paycor Stadium signage in place by their home preseason game Friday against the Arizona Cardinals.

[The Cincinnati Enquirer; photo from Bengals.com]