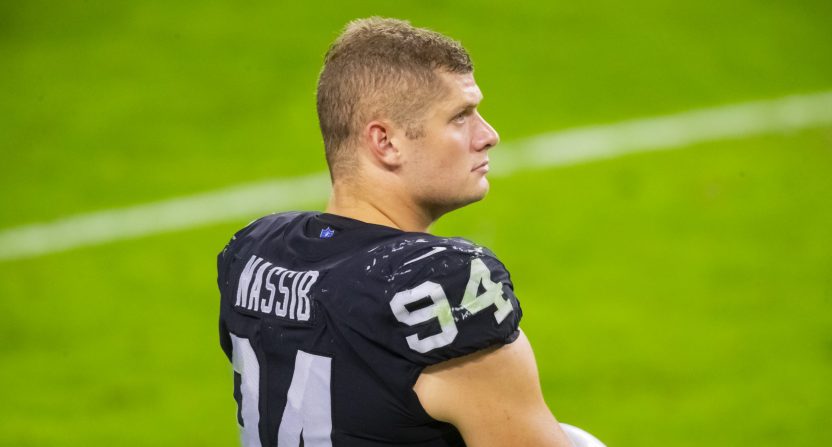 When news broke about Jon Gruden’s emails, it became pretty clear that they made it impossible for him to continue to coach the Raiders and be part of an NFL organization. He shared inappropriate photos of cheerleaders, made derogatory comments related to social justice and black issues, and used homophobic slurs, just to name a few things.

Not only are many of his players, coaches, and other personnel black, but Carl Nassib, the only out gay player in the NFL, plays for the Raiders. Knowing all of that means that there’s going to be a lot of work and rebuilding within the organization to move on from all of this, something that general manager Mike Mayock understands.

He spoke with reporters on Wednesday, saying that he and his staff have reached out to players.

“I’ve talked to several of the Black players. We’ve reached out to a bunch of players, Black and white,” Mayock said. “Everybody’s got emotions and feelings. I’ve talked to some of the people in my department that are Black. My director of pro scouting [Dwayne Joseph], and I just said, ‘DJ, I can’t put myself in your shoes. Help me.’ So we’ve spent a pretty good amount of time trying to help these guys and talk with these guys and not talk at them, but with them.”

As far as Nassib, he said that Nassib asked for and was granted a personal day in order to process the situation. And the team is doing what it can to support him and the LGBTQ community.

“The other thing I would say is for Carl, let’s be honest, he’s a community of one that’s openly gay,” said Mayock.” We do have a large community of African-American players, and I’m trying to, we’re trying to do everything we can for that community as well, obviously. It started there. Nobody’s forgetting that. I’m trying to work with everyone, and we’re going to continue to do that.”

Nassib received a lot of support from those on social media and around the NFL world as well.

Carl Nassib doesn’t have to answer for Gruden’s emails… not his job not his problem https://t.co/BEqnKVfvid

My heart hurts for Carl Nassib. I hope he's surrounded with all the love and support he needs right now. https://t.co/KtWh4y6haa

It’s quite a troubling situation in Las Vegas and the team still has to prepare for a game on Sunday against the Denver Broncos. Raiders legend Art Shell said that the best thing for the team would be to focus on moving forward and preparing for their next game, which is easier said than done. We’ll see how the rest of the week plays out for the Raiders and their players.